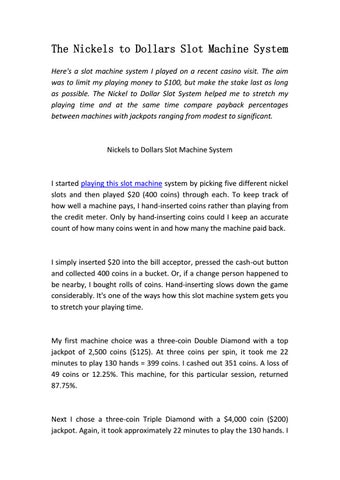 The Nickels to Dollars Slot Machine System Here&#39;s a slot machine system I played on a recent casino visit. The aim was to limit my playing money to $100, but make the stake last as long as possible. The Nickel to Dollar Slot System helped me to stretch my playing time and at the same time compare payback percentages between machines with jackpots ranging from modest to significant.

I started playing this slot machine system by picking five different nickel slots and then played $20 (400 coins) through each. To keep track of how well a machine pays, I hand-inserted coins rather than playing from the credit meter. Only by hand-inserting coins could I keep an accurate count of how many coins went in and how many the machine paid back.

I simply inserted $20 into the bill acceptor, pressed the cash-out button and collected 400 coins in a bucket. Or, if a change person happened to be nearby, I bought rolls of coins. Hand-inserting slows down the game considerably. It&#39;s one of the ways how this slot machine system gets you to stretch your playing time.

For my last 5-cent slot in this slot machine system cycle, I selected a three-coin Ten Times Pay slot dangling a carrot worth 25,000 coins ($1,250) as a top jackpot. It devoured 263 of the 399 coins I put into it. This machine kept a whopping 65 .66% for the casino and paid out a measly 34.34%! Playing this slot machine system makes you aware of such things!

The results this slot machine system produced clearly showed that the higher the jackpot, the more volatile the game. If you want to make your money last and would be satisfied with a relatively modest win, don&#39;t select a machine offering a super-large jackpot.

On the other hand, if only a really big win would make you happy, take the all-or-nothing approach, go for that colossal prize, but realize that you will likely face an early exit.

With this Nickels to Dollars Slot Machine System it took nearly two hours to play 400 coins through each of five different 5-cent machines. When I cashed in my three buckets full of nickels, I collected $73.25. Over all, the hold percentage for those nickel slots was a very steep 26.64%. But then, we know that nickel slots have the worst payouts.

My first pick was a two-coin Double Diamond model with a modest 1,600 coin ($400) jackpot. At two coins a spin, it took less than ten minutes to run 100 coins through the machine. I collected 118 coins. My first positive payback = a profit of 18 quarters ($4.50). Maybe playing this slot machine system was going to make me a winner in the end?

My $100 starting stake had shrunk to $57.50. My slot machine system performed disappointingly so far. After a short break I found a bank of

50-cent machines, each with it&#39;s own individual, progressive jackpot. The jackpots on all the machines were in the $503 to $575 range. Obviously, the jackpot started at $500 and hit relatively often, since not even one progressive had reached the $600 mark.

These were three-coin slots and to have a chance of collecting the jackpot I had to play maximum coins. There was not much choice of machines, since only the ones with the lowest and second-lowest jackpot amounts were not in use. I picked the machine where the sign read $511.

t three coins per hand, my $57.50 bankroll gave me only 19 three-coin spins. If I didn&#39;t hit anything quickly, this slot machine system session would come to an end all too soon.. I needn&#39;t have worried, this time Lady Luck smiled. I lined up three sevens, good for a secondary jackpot of 300 coins. Less than five minutes after I sat down, I collected $150, giving me a net profit of $78.

Now it was decision time. Should I wager the whole bundle on dollar machines, or pocket my original $100 and take only my $78 profit to the dollar slots? I split the difference and put exactly half, $89, at risk. $45 on one dollar machine and $44 on another.

I spotted a two-coin $1 Double Diamond machine paying a jackpot of $800 for one-coin and $1,600 for two-coin play. Since there wasn&#39;t any real advantage in inserting maximum coins, I opted to make my time at the machine last, playing one coin per spin at a leisurely pace. That way my $45 kept me there for a good ten minutes. The result? I cashed out a very disappointing $12.

For my last effort playing this slot machine system I selected a two-coin Wild Cherry model that also did not offer a bonus for multiple coins. The jackpot was posted at $2,500 for one-coin, and $5,000 for two-coin play. This machine was at the end of an aisle, slots all around and far away from the table-game area. According to slot playing wisdom, it&#39;s considered an ideal spot for a loose machine.

Since it was my last hurrah for this slot machine system session, I decided to bet two coins per spin and go for the $5,000 jackpot. Well, the jackpot didn&#39;t materialize, but I did cash out $58, $14 more than I put into this machine. In total I made a net profit of $59 in about three hours of slot play. Not bad! Now I had renewed faith in my slot machine system.

Obviously, when you play this slot machine system online you can not insert coins by hand, which means you need to keep track of coins played in a different way. You can do this by marking every spin with a line on a sheet of paper, Make little squares of five lines, four vertical and one horizontal. To see how many coins have been played at any time, you simply add up the squares of five lines times the number of coins per spin. The process takes about the same amount of time as inserting individual coins when playing in a real casino.

If you wish to experiment with this slot machine system, you can try it out before you risk any money. Most online casinos will let you play for free. A good place to test this slot machine system is Royal Vegas Online Casino. Look for a two-coin single payline slot with a modest jackpot, where payouts range from 2 coins to 100 coins. You&#39;ll have a good chance of making a profit at the 25-cent level, before going on to the next level.

Here's a slot machine system I played on a recent casino visit. The aim was to limit my playing money to $100, but make the stake last as long as possible. The Nickel to Dollar Slot System helped me to stretch my playing time and at the same time compare payback percentages between machines with jackpots ranging from modest to significant. 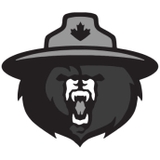