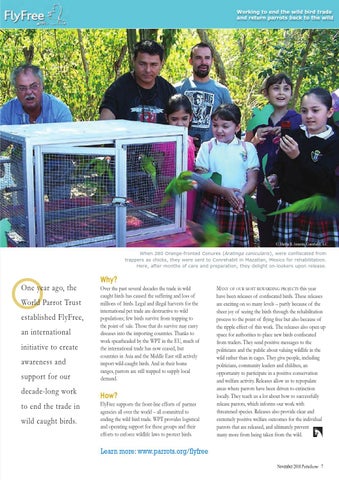 When 280 Orange-fronted Conures (Aratinga canicularis), were confiscated from trappers as chicks, they were sent to Conrehabit in Mazatlan, Mexico for rehabilitation. Here, after months of care and preparation, they delight on-lookers upon release.

One year ago, the World Parrot Trust established FlyFree, an international initiative to create awareness and support for our decade-long work to end the trade in wild caught birds .

Why? Over the past several decades the trade in wild caught birds has caused the suffering and loss of millions of birds. Legal and illegal harvests for the international pet trade are destructive to wild populations; few birds survive from trapping to the point of sale. Those that do survive may carry diseases into the importing countries. Thanks to work spearheaded by the WPT in the EU, much of the international trade has now ceased, but countries in Asia and the Middle East still actively import wild-caught birds. And in their home ranges, parrots are still trapped to supply local demand.

How? FlyFree supports the front-line efforts of partner agencies all over the world â&amp;#x20AC;&amp;#x201C; all committed to ending the wild bird trade. WPT provides logistical and operating support for these groups and their efforts to enforce wildlife laws to protect birds.

MANY OF OUR MOST REWARDING PROJECTS this year have been releases of confiscated birds. These releases are exciting on so many levels â&amp;#x20AC;&amp;#x201C; partly because of the sheer joy of seeing the birds through the rehabilitation process to the point of flying free but also because of the ripple effect of this work. The releases also open up space for authorities to place new birds confiscated from traders. They send positive messages to the politicians and the public about valuing wildlife in the wild rather than in cages. They give people, including politicians, community leaders and children, an opportunity to participate in a positive conservation and welfare activity. Releases allow us to repopulate areas where parrots have been driven to extinction locally. They teach us a lot about how to successfully release parrots, which informs our work with threatened species. Releases also provide clear and extremely positive welfare outcomes for the individual parrots that are released, and ultimately prevent many more from being taken from the wild.

On September 18th, 523 African Grey Parrots (Psittacus erithacus) were bound for Singapore with forged CITES paperwork when they were confiscated by authorities at the Kavumu airport in the Democratic Republic of Congo (DRC) in central Africa.

TWO HOURS LATER the birds arrived at Lwiro Primate Sanctuary in terrible condition. Lwiro is a rescue centre which houses over 100 orphaned chimpanzees and monkeys, with no existing facilities for birds. The arrival of the parrots was a serious strain on staff and reserves, necessitating an urgent appeal for help. “We didn’t have much warning,” said Carmen Vidal, manager of Lwiro Sanctuary. “We were told the parrots were coming and then they were here.” The confiscation came too late for twenty-nine birds that were dead on arrival or died shortly afterward. Some of the nearly 500 remaining birds were found to be tied to one another by one wing. They also had no food or water for an unknown period of time. Their situation required immediate stabilization. In response, the World Parrot Trust (WPT) immediately publicised the appeal and received

an outstanding level of support which went immediately to help the birds and their caregivers. This type of need is precisely the reason the FlyFree programme was initiated one year ago. It is also a perfect example of what FlyFree is about: quick and purposeful action where it is most needed to get birds back out into the wild. THE CONGO 500 EFFORT AT A GLANCE: Over 220 WPT supporters from around the world answered our emergency appeal. Columbus Zoo, Disney Rapid Response Fund and Natural Encounters Conservation Fund all made major contributions (see p19). Within days, WPT sent funds for immediate food and housing costs. Nutritional and medical advice and flight cage plans were provided. Additional funds were sent to cover the construction of 8 large flight cages. Three veterinarians travelled to Lwiro to provide specialised medical assistance.

Upon arrival, 523 African Grey Parrots crowded in 6 small crates were released into Lwiro’s education classroom. A temporary indoor enclosure was swiftly adapted for their use (top) while 8 large outdoor flights could be constructed.

Food preparation is on a huge scale with 10kg (22lbs) served twice daily. The birds are enjoying their diet of cooked beans and rice, corn, pineapple, bananas, palm nuts and oil along with a variety of supplements.

Dr. Davide De Guz, Dr. Gino Conzo (both from Italy) and Dr. Noel Arienteireho (Uganda Wildlife Education Center) arrived at Lwiro on October 21st. They brought with them a muchneeded anaesthesia machine (with the help of Dr. Collarile) and 4kg (9lb) of supplements and medications donated to Lwiro by GEAVET. The vets are working under difficult conditions due to on-going political unrest in this area. The nature of the conditions and the seriousness of the work to be done truly accentuate the dedication of those working to help these birds regain their freedom. Lwiro itself is very remote and operates with only the necessities. Basic services can be hard to find after many years of war in the DRC. Locating supplies such as an oxygen tank can be very challenging. Initial examination revealed that most of the Greys were suffering from parasites, principally tapeworms. The infestation was very serious and was the cause of the initial deaths. The remaining birds were individually treated with great success, needing a second dose after 15 days. Now, a month after their arrival, 460 birds have survived. Most are eating well, are banded and ready for release. Several birds are ill and are being treated and monitored in separate cages. A third group have feather damage but are otherwise healthy and will be released when their feathers re-grow.

THIS IS THE FIRST CONFISCATION OF ITS KIND in the DRC but similar illegal shipments have been confiscated several times in recent years in west Africa. In a three-year period over 2,700 Grey Parrots have been confiscated, rehabilitated and released, when possible, in Cameroon. Grey Parrot shipments have also been seized in Kenya and Bulgaria. It is worth mentioning that these huge illegal shipments are not being transported underground. They are moving openly using forged permits, confirming that it is the on-going legal wildlife trade that is facilitating these repeated tragic situations. IUCN figures provided by Birdlife indicate that almost one-quarter of existing Grey Parrot populations are being trapped each year â&amp;#x20AC;&amp;#x201C; making them one of the most heavily traded parrot species on the international market. Adding urgency is the belief that by using established trade routes, dealers in other species, such as great apes, can quite easily cross over to parrots and visa-versa. It is our hope that this confiscation in the DRC is just one more step towards ending of the trade of wild caught Greys altogether. Watch for updates in PsittaScene and at ww.parrots.org/flyfree Veterinarians from Italy and Uganda spent 10 days at Lwiro to help assess and treat all 500 of the birdâ&amp;#x20AC;&amp;#x2122;s individual medical needs. Dedicated parrot keepers were hired to provide daily care.

One year after its

FlyFree action around the world

been an outstanding success. Over 20,000 visitors have viewed the

In addition to working with the Lwiro Sanctuary on the Congo 500 (page 8) WPT has initiated surveys of bais (forest clearings) in the Democratic Republic of Congo (DRC) to better understand how they are used by African Greys and how much local trapping is occurring.

understanding of the successful efforts taking place. More than 300 individuals have made donations. The scope of

WPT co-sponsored a workshop of agencies to harmonize communication and collaboration especially concerning procedures to help Grey Parrots impounded in transit. We also provided support for the construction of a rehabilitation aviary for confiscated Greys.

WPT assisted with the confiscation, rehabilitation and eventual release of 1500+ African Grey Parrots (Psittacus erithacus) taken in by the Limbe Wildlife Centre over just a few months. Emergency funds and logistical guidance were immediately dispatched to provide for the essential care of the birds. Long-term support helped see the releasable birds through rehabilitation.

WPT assisted with the release of the extremely rare Mitchell’s Lorikeets (Trichoglossus haematodus mitchellii) on the island of Nusa Penida. This species is reduced to a small handful of remaining birds due to trade.

WPT worked with partner Associação Bichos da Mata (ABM) to release 47 birds (Amazona and Ara macaws) to the Pantanal in Brazil. We participated in their latest release of almost 100 Blue-fronted Amazon Parrots (Amazona aestiva), provided 12 radio collars and are partnering to monitor birds post-release. WPT co-hosted a workshop with IBAMA São Paulo and ABM for those involved in rehabilitating and releasing parrots. We also provided emergency assistance for 300 Amazon parrot nestlings seized from trappers.

WPT funded the printing of informational booklets for school-aged children that profile the Patagonian Conure (Cyanoliseus patagonus), a local species frequently found in trade. We are also funding the protection of a colony of the rare Chilean subspecies which has been under severe poaching pressure in recent years.

Working with Belize Bird Rescue, WPT provided support for the rehabilitation and release of confiscated birds. We participated in releases and provided bands and guidance as needed.

WPT met with wildlife trade enforcement officers in Honduras about heavy cross-border wildlife trafficking with Nicaragua. Near the city of Copan a new project was initiated to rehabilitate and release Scarlet Macaws (Ara macao) into a UNESCO National Heritage Park and Archaeological Site.

WPT provided technical help and bands to Conrehabit in Mazatlan Mexico (see photo p.7) for the rehabilitation and release of over 250 Orange-fronted Conures (Aratinga canicularis) confiscated from poachers as chicks. 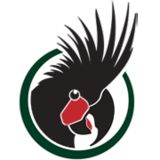