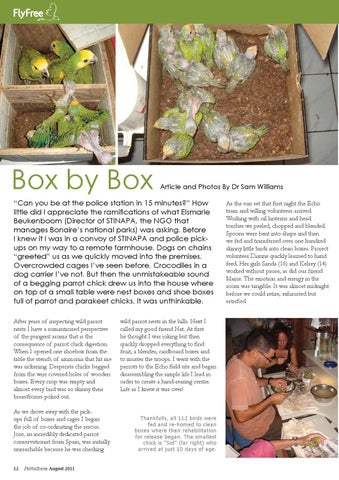 “Can you be at the police station in 15 minutes?” How little did I appreciate the ramifications of what Elsmarie Beukenboom (Director of STINAPA, the NGO that manages Bonaire’s national parks) was asking. Before I knew it I was in a convoy of STINAPA and police pickups on my way to a remote farmhouse. Dogs on chains “greeted” us as we quickly moved into the premises. Overcrowded cages I’ve seen before. Crocodiles in a dog carrier I’ve not. But then the unmistakeable sound of a begging parrot chick drew us into the house where on top of a small table were nest boxes and shoe boxes full of parrot and parakeet chicks. It was unthinkable. After years of inspecting wild parrot nests I have a romanticised perspective of the pungent aroma that is the consequence of parrot chick digestion. When I opened one shoebox from the table the stench of ammonia that hit me was sickening. Desperate chicks begged from the wire covered holes of wooden boxes. Every crop was empty and almost every bird was so skinny their breastbones poked out. As we drove away with the pickups full of boxes and cages I began the job of co-ordinating the rescue. Jose, an incredibly dedicated parrot conservationist from Spain, was initially unreachable because he was checking 12   PsittaScene August 2011

wild parrot nests in the hills. Next I called my good friend Nat. At first he thought I was joking but then quickly dropped everything to find fruit, a blender, cardboard boxes and to muster the troops. I went with the parrots to the Echo field site and began disassembling the simple life I lead in order to create a hand-rearing centre. Life as I knew it was over!

Thankfully, all 112 birds were fed and re-homed to clean boxes where their rehabilitation for release began. The smallest chick is “Sid” (far right) who arrived at just 10 days of age.

As the sun set that first night the Echo team and willing volunteers arrived. Working with oil lanterns and head torches we peeled, chopped and blended. Spoons were bent into shape and then we fed and transferred over one hundred skinny little birds into clean boxes. Project volunteer Dianne quickly learned to hand feed. Her girls Sanda (16) and Kelsey (14) worked without pause, as did our friend Maine. The emotion and energy in the room was tangible. It was almost midnight before we could retire, exhausted but satisfied.

Poached from their nests, these native Bonairean parrots were confiscated before they could be smuggled off the island.

The next morning I woke at 6 am and by the time a cup of tea was ready Jose was up too. Then Dianne and the girls returned and we did it all over again. The situation was far from ideal. Our system was primitive and the birds were not used to being fed by people. It took us over three hours to complete the feed, which didn’t leave much time to organise all the other things we needed to sort. The birds came to us at all different ages. The youngest, “Sid,” was less

than 10 days old. The oldest were near fledging. We needed to separate them according to their needs. We have a release aviary from which other illegally captured parrots have been successfully released. “Fat Sally” and “The Darling” were plucked from the aviary in order to make room for the older juvenile parakeets and three parrots. Giving those independent birds more space felt great. As more help arrived we were able to adapt cages to accommodate a few weaning birds. This gave them the space to pick at fruit, seeds and pulses – a

The birds are Yellow-shouldered Amazons (Amazona barbadensis) and Brown-throated Conures (Aratinga pertinax xanthogenia). They are native to Bonaire and were believed to be bound for Curacao to be sold into the pet trade. Many were close to perishing, and one had already died. With no time to spare, Echo staff began caring for the parrots and worked through the night by lantern to save them. The birds were in a terrible state, and desperately needed feeding after being kept in appalling conditions and without food for several days. Out of the 112 birds about 90 chicks required one-on-one care.

To keep up with the rescue effort or to support Echo to get these parrots back into the wild visit: n Sam’s blog n Echo’s dedicated rescue website n Echo’s facebook page All on: www.psittascene.org Special thanks to:

Full and developing nicely, this endangered Yellow-shouldered Amazon will join other lucky chicks in the pre-release aviary as it fledges. These birds have a hopeful future because authorities acted quickly and a devoted team stopped everything to take them in. Stay tuned for release news.

nice thing to see. We were finished earlier that second night but between feeding, preparing housing and feeding again, it was another very long day. By the time crops were full and Jose and I were sitting with a cup of tea we were beyond tired. Slowly but surely we made progress: new boxes for the birds; better lights for the room; syringes rather than spoons for feeding. But these were small details and each night it became more apparent that we couldn’t keep this up! It was Jamie Gilardi who first suggested we find a room in town. Two days later we moved into a free-for-the-summer classroom of an after school education centre courtesy of Jong Bonaire. The wonderful director Elona has welcomed our crazy ideas and made it possible for the rescue to really start moving forward. Having dependable electricity, lights, tables and chairs made so much difference. Being in town made it easier to find volunteers and allowed new people to get involved. Two Bonairean boys – Gideon Goedgedrag and Rayen Seraus – who are involved with Jong Bonaire joined our team. They love working with the parrots and they are proving to be willing workers when it comes to all the other, less exciting but important tasks involved with keeping the rescue going. Thanks guys! 14   PsittaScene August 2011

So far only one bird, a parakeet, has died in our care. We were immediately concerned about him on Day 1 but he died before Day 2. We are pleased no others have left us that way. Three other parakeets left us on separate occasions but only when they took advantage of open cage doors. All flew over to the release aviary. I caught one pre-dawn while he was napping, and Jose caught another because it had a hermit crab stuck on the end of his beak! The third hangs out on top of the aviary along with “Harry,” a released parrot who only flies when the Crested Caracara family flies over. It seems there’s little point trying to catch this parakeet. So we’ve crossed the first milestone – triage is over and all the birds are progressing. Now I am terrified we will get a disease outbreak or bacterial infection. Phoebe Green Linden will arrive tomorrow and I look forward to having someone with (much) more hand rearing experience who can make further improvements to our improvised facility. The next obvious challenge stage is dealing with imprinting and the association between humans and food. Tonight I dressed up in an old bed sheet and put a bag on my head to try out a new

look. I’m sure with a little tweaking we’ll create something that works! It is important to avoid imprinting because (of course!) we intend to release these parrots back into the wild once they are rehabilitated and independent. We’ve already done a successful parrot release (more about that next time) and we’re confident these birds will be able to be go back to the wild. If we can find the right fit, we are hoping to foster some of the younger Yellow-shouldered Amazon Parrots into wild nests. That will make it possible for them fledge with the other chicks hatched this season. It’s a shame they were taken from nests in the first place! STINAPA’s rapid response to this situation allowed them to seize these birds from illegal traders. By working together with STINAPA it has been possible for Echo to rehabilitate the birds and save many from death or from lives of confinement. The dedication of the Echo team and volunteers has been tremendous. I am extremely proud and owe a huge thanks to everyone involved. Dr. Sam Williams’ love of parrots goes back to his childhood in Yorkshire, England. He has worked with Echo Parakeets on Mauritius, Lear’s Macaws in Brazil and now heads Echo and the Bonaire Parrot Project.