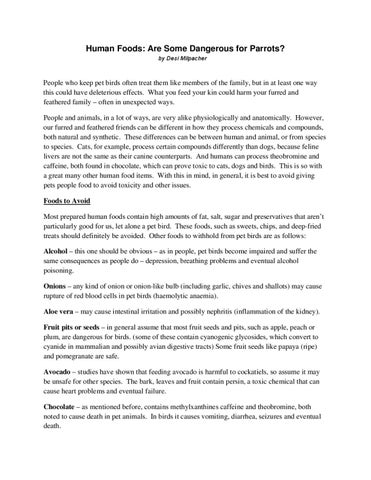 Human Foods: Are Some Dangerous for Parrots? by Desi Milpacher

People who keep pet birds often treat them like members of the family, but in at least one way this could have deleterious effects. What you feed your kin could harm your furred and feathered family – often in unexpected ways. People and animals, in a lot of ways, are very alike physiologically and anatomically. However, our furred and feathered friends can be different in how they process chemicals and compounds, both natural and synthetic. These differences can be between human and animal, or from species to species. Cats, for example, process certain compounds differently than dogs, because feline livers are not the same as their canine counterparts. And humans can process theobromine and caffeine, both found in chocolate, which can prove toxic to cats, dogs and birds. This is so with a great many other human food items. With this in mind, in general, it is best to avoid giving pets people food to avoid toxicity and other issues. Foods to Avoid Most prepared human foods contain high amounts of fat, salt, sugar and preservatives that aren’t particularly good for us, let alone a pet bird. These foods, such as sweets, chips, and deep-fried treats should definitely be avoided. Other foods to withhold from pet birds are as follows: Alcohol – this one should be obvious – as in people, pet birds become impaired and suffer the same consequences as people do – depression, breathing problems and eventual alcohol poisoning. Onions – any kind of onion or onion-like bulb (including garlic, chives and shallots) may cause rupture of red blood cells in pet birds (haemolytic anaemia). Aloe vera – may cause intestinal irritation and possibly nephritis (inflammation of the kidney). Fruit pits or seeds – in general assume that most fruit seeds and pits, such as apple, peach or plum, are dangerous for birds. (some of these contain cyanogenic glycosides, which convert to cyanide in mammalian and possibly avian digestive tracts) Some fruit seeds like papaya (ripe) and pomegranate are safe. Avocado – studies have shown that feeding avocado is harmful to cockatiels, so assume it may be unsafe for other species. The bark, leaves and fruit contain persin, a toxic chemical that can cause heart problems and eventual failure. Chocolate – as mentioned before, contains methylxanthines caffeine and theobromine, both noted to cause death in pet animals. In birds it causes vomiting, diarrhea, seizures and eventual death.

Human Foods: Are Some Dangerous for Parrots?

Coffee beans – the caffeine in coffee beans may cause increased heart rate and has been shown to cause reduced egg production in chickens. Herbal remedies or spices – herbs and spices such as comfrey, ginger, nutmeg, gingko and even basil can cause problems from skin irritation all the way to liver failure in people. Since not many studies have been done regarding herbals and spices in birds, avoid them. It helps to remember that plants can produce pharmacological effects that can be positive or negative. Grapefruit and starfruit– while there is no evidence that the actual fruits are harmful both have been shown to cause increases in blood plasma concentrations of some medications in humans, leading to over-dosage. With this in mind pet birds on medication are better off without these items. Cooking oils – the main danger here is in the frying of food in the vicinity of pet birds. Without proper ventilation, death can occur from inhalation of gases. Also, birds should not ingest oils, as they are high in fat. Tomatoes, spinach and other foods containing oxalic acid – this compound can attract calcium ions, causing a lowering of blood calcium levels. It can also exacerbate certain diseases, such as gout or kidney problems. Raw peanuts – aflatoxins (caused by the Aspergillus flavus fungus) found in raw, improperly stored peanuts can harm a parrot – these toxins are hepatotoxic (harmful to the liver) and carcinogenic (cancer-causing). Alflatoxins have largely been reduced in peanuts through roasting and proper storage. Selecting clean-looking, roasted, plain peanuts helps. Mushrooms – these fungi can cause digestive upset in birds. The caps and stems of some varieties can also cause liver failure. Also, as with people, birds may suffer the negative effects of too many vitamins (hypervitaminosis) and minerals in their diet. These problems may range from kidney damage to gout to neurological deficits. Checking with an avian veterinarian about diet can reduce these risks. In sum, a person should not assume that foods that are safe for human consumption are harmless for parrots. The differences in physiology and metabolism between humans and animals are at play here, and should be carefully considered when a person is judging what is appropriate to feed his/her pet bird. Keeping a pet bird’s diet to a carefully formulated kibble or nectar, approved (and, if possible, organic) fruits and vegetables and a minimal amount of seed, if at all, is the surest way to keep a feathered family member healthy.

This article is provided for information purposes only and should not replace an avian veterinarian’s advice. The World Parrot Trust encourages people to seek nutritional help for their pet birds from a qualified professional.

People who keep pet birds often treat them like members of the family, but in at least one way this could have deleterious effects. What you...

People who keep pet birds often treat them like members of the family, but in at least one way this could have deleterious effects. What you...