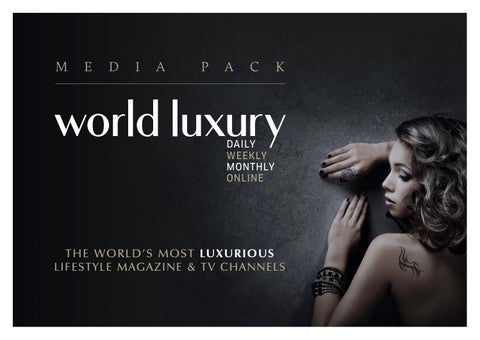 A MAGAZINE AND TV CHANNELS TO TANTALISE YOUR SENSES, PLACES TO THINK AND BE LUXURIOUS. LUXURY IS MUCH MORE THAN EXPENSIVE THINGS. IT IS ABOUT APPRECIATION, THE EXPERIENCE AND TIME. LUXURY IS A STATE OF MIND AND A LIFESTYLE CHOICE.

World Luxury Daily Magazine gives you access to the secrets behind owning or ﬂying a modern jets, luxury cars, jewellery to ﬁne art and events; to the best reviews by contributors who have experienced it all.

Your guide to the latest fashion trends, the alluring prospects of luxury and the inviting galleries of ﬁne art.

World Luxury Media is a unique company. We value our clients on every level, because their success means ours. That’s why our publications are not only beautiful and intriguing, but they are also powerful marketing tools for advertisers. Whether your product or service is in travel, automobiles, hospitality, fashion, home décor, or any other part of the luxury lifestyle industry, we provide an excellent outlet to attract clientele.

WORLD LUXURY DAILY MAGAZINE FEATURES Every day, World Luxury Daily will feature a number of special articles and videos on speciﬁc aspects of the Luxury Experience and brands.

ICHEBOURG GRAND CRU, A RARE VINTAGE FROM FRANCE’S FAMED WINE-GROWING BURGUNDY REGION HAS BEEN NAMED THE WORLD’S MOST EXPENSIVE WINE, COSTING AROUND $15,000 PER BOTTLE

The story started with a stroke of red nail colour and the legend continues 22 years later. Over the years Christian realised that his understanding of femininity and elegance had gone beyond shoes. People were already embracing the spirit of the brand, so stepping into beauty was natural for Louboutin. A milestone in the history of Christian Louboutin is the way he created 'Pensée', a shoe designed in 1992 inﬂuenced by Warhol and the Pop Art movement. Having drawn the shoe perfectly to his satisfaction, he was disappointed when he saw the prototype. Something was missing, even though it was very close to the initial drawing.While staring at the prototype he saw his assistant painting her nails at her desk next to him. He sponteneously grabbed the nail polish and proceeded to paint the sole of the shoe. He liked it... HE LOVED IT.... ET VOILA! The signature red sole was born.

France famous Burgundy region has been recognized as UN world heritage site and now a rare vintage from the area emerges as the world’s most expensive wine. Richebourg Grand Cru sells at a cool $14,625 a bottle, according to the WineSearcher website list of world’s top 50 vintages by price. Founded in London in 1999, WineSearcher releases periodic updates to its 50 most expensive wines list, which is based on prices from nearly 55,000 wine merchants and producers around the world.

THE ISLANDS OF COPPERFIELD BAY HIDDEN AMONG THE OUT-ISLANDS OF THE EXUMAS YOU WILL FIND OVER 700 ACRES OF LUSH NATURAL BEAUTY - AND THE ONLY OTHER GUESTS ARE SELECTED BY YOU.

Mahali Mzuri is Sir Richard Branson’s 12-tented luxury safari camp in the Kenyan Bush. The name means ‘beautiful place’ in Swahili, and we hope you agree!

The company says that the Vision Gran Turismo car celebrates Bugatti's history, but you can clearly see strong elements of Veyron in here, and they've previously hinted that design elements on this car would foreshadow Bugatti's future. In other words, we're probably seeing at least a few elements here from the Chiron, the company's next hypercar expected to launch next year for in excess of $2 million with well over 1,400 horsepower and a top speed approaching 300 miles per hour.

The company has its headquarter in the italian city of Mantova. Christies Lingerie Showroom is located in Milan, the capital of Italian fashion and style. www.christieslingerie.it

“The potential to craft a diamond that could join its hall of noble, historic and world famous stones was a thrilling prospect,” Graﬀ said in a statement.

The designers have unmistakably transferred the most important characteristics of Bugatti's design DNA into the styling of the virtual race car. Consequently, the side view of the Bugatti Vision Gran Turismo is characterised by the famous Bugatti line. And the virtual race car has also been furnished with the most recognisable symbol of a Bugatti, the horse shoe on the front grille. It is placed in the centre of the central front air intake as three-dimensional sculpture and supports the structure between the wings and the aerodynamic front splitter.

An interesting detail on the roof is the NACA air intake, which, with its contrasting light blue ﬁnish, not only has a strikingly beautiful shape but also makes a crucial contribution to the control of the aerodynamic conditions on top of and at the rear of the car without compromising the eﬀectiveness of the impressive rear wing.

JUMEIRAH AT ETIHAD TOWERS HAS BEEN WELCOMED AS AN UNQUALIFIED SUCCESS SINCE ITS OPENING IN LATE 2011.

The car has a strong trailing edge which provides great longitudinal-dynamic stability, exhausts the hot air from the engine compartment and, no less important, communicates to the pursuer in the video game that a Bugatti is getting away from him. www.bugatti.com

The ﬁrst property from the Dubai-based luxury hotel operator in the progressive, sophisticated, international emirate of Abu Dhabi, the audacious hotel was developed under the patronage of His Highness Sheikh Suroor bin Mohammed Al Nahyan’s Projects Department.

The 280 metre luxury hotel is one of ﬁve towers at the iconic Etihad Towers beachfront project, which also includes a prestigious oﬃce tower and three towers housing 885 residential apartments.

The company then set out to study the rough to determine the best way to cut it and then set out to do the work. In addition to The Golden Empress, the rough yielded eight satellite diamonds, comprising six pear shape Fancy Yellow stones—the largest being 21.34 carats— and two brilliant round stones.

Laurence Graﬀ, the founder of the international luxury diamond and jewelry ﬁrm that bears his name, purchased the 299-carat rough diamond that created The Golden Empress. It was unearthed from the Letšeng mine in the tiny southern African kingdom of Lesotho.

Graﬀ’s latest catch is being called “The Golden Empress,” a 132.55-carat Fancy Intense cushioncut yellow diamond. The diamond is set on a necklace with approximately 30 other yellow diamonds. Fancy colored diamonds are very popular these days as adornment and investment, because of their beauty and rarity. Only one in 10,000 diamonds discovered are classiﬁed as fancy colored. So it’s even rarer to ﬁnd one a particular color, such as this yellow diamond.

Bugatti has unveiled its Vision Gran Turismo, a hypercar designed for Polyphony Digital's everexpanding slate of fanciful, incredible cars designed for Gran Turismo's virtual world. It will be on the ﬂoor of the Frankfurt auto show later this month.

Graﬀ Diamonds just released images of a new statement diamond to add to what is a very long list of diamonds that are among the largest and rarest in the world.

Mahali Mzuri is Sir Richard Branson’s Kenyan safari camp located in the World-famous maasai mara ecosystem and right in the path of the annual great migration. mahali mzuri sits Within the olare motorogi conservancy which covers an area of 13,500 hectares! there are endless opportunities for game vieWing, so all you need to do is sit Back and let the Wildlife come to you!

Musha’s ﬁve guest houses are designed in a charming tropical style. All master suites boast magniﬁcent four-poster beds and ensuite his- and her - bathrooms, and all of the houses are surrounded by mahogany, wrap-around decks. All have their own, private beach. David Copperﬁeld is continuously enhancing the accommodations with collected antiques and exotic treasures from around the world. For the latest news, updated daily, please visit

Private sun warms your face and private waves lap your feet. Private moon lights your plate, and private seas surround you. This is Musha Cay and the Islands of Copperﬁeld Bay. Surely it’s one of the most secluded spots on earth, yet everything you want is provided..then quietly, unobtrusively, replenished.

“WHEN YOU THINK OF GOING ON SAFARI IN KENYA, ONE OF THE FIRST THINGS THAT COMES TO MIND IS THE GREAT MIGRATION. WORDS JUST CAN’T DO JUSTICE TO THE MAJESTY OF THIS AWE-INSPIRING SPECTACLE. I HOPE YOU ENJOY YOUR KENYAN ADVENTURE AS MUCH AS I ALWAYS DO.”

Left: Musha Cay The magical Musha Bay at the heart of Copperﬁeld Bay in the Bahamas

Being named a UNESCO heritage site for the singularity of its vineyards, the Cote de Nuits produces some of the ﬁnest red vintages in the world made from pinot noir and chardonnay grapes. The Richebourg Grand Cru was a Cote de Nuits created by the ingenious winemaker, Henri Jayer. The visionary in his business, Mr. Jayer was against using chemicals in the winemaking process and believed in small-scale production, only turning out an estimated 3,500 bottles per year.

Richebourg is an Appellation d’origine contrôlée (AOC) and Grand Cru vineyard for red wine in the Côte de Nuits subregion of Burgundy, with Pinot noir as the leading grape variety. It is located within the commune of Vosne-Romanée, and borders La Romanée and Romanée-Conti in the south, Romanée-Saint-Vivant in the east and Vosne-Romanée Premier Cru vineyards in the north and west.

Like the nail polishes before them, the lipsticks are designed as objects of desire as much as they are colour cosmetics - in vial-like golden packaging with ribbon ties. The 38 colours are available as Silky Satin, Velvet Matte and Sheer Voile ﬁnishes - including a classic crimson, of course.

RICHEBOURG GRAND CRU: THE MOST EXPENSIVE WINE IN THE WORLD

World Luxury Daily editors post hundreds of stories a day to each of the main 9 social media platforms across 85+ diverse luxury sectors.

These stories include photos exciting editorial article posts, photo slideshows, videos, & interactive 360 photospheres. Total monthly reach via our 9 main platforms is now over 30+ million views / month and growing at a rapid rate. Number of engaged followers has also dramatically increased by 100% on a monthly basis. Engagement and click throughs can be tracked through Bit.ly link tracking and other analytics tools.

ENGAGEMENT World Luxury Daily continues to innovate and reﬁne the types of digital advertising products available to partners. In addition to standard units, advertisers now have the ability to use a variety of IAB Rising Star units, as well as site-served and interactive units, to increase engagement with their brand. Increase interactivity through videos, slideshows, maps, and other creative units via the use of rich media. CUSTOM POST Our editors will create bespoke luxury content for your brand, if you wish press releases can be also be sent.

SOCIAL MEDIA AGENCY We oﬀer a full “take over” service for your social media, fully managing a clients marketing across the major social media platforms. We will create an oﬃcial page if not already setup.

Working with your PR department we will release news in a timely and structured fashion whilst building a community and a group of followers through active engagement. We will be able to deliver a set level of luxury followers each month. TV CHANNEL Explore 30 Luxury TV Channels from Private Jets to Luxury Villas! luxurytv.tube EMAIL PROGRAM Directly Access Our Opt-in Audience. World Luxury Daily’s email oﬀerings drive lead generation and brand recognition for advertisers while providing timely news about our readers’ passions. Banner placements include 300x250 and 650x225, as well as custom integrated opportunities. 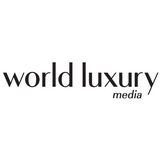