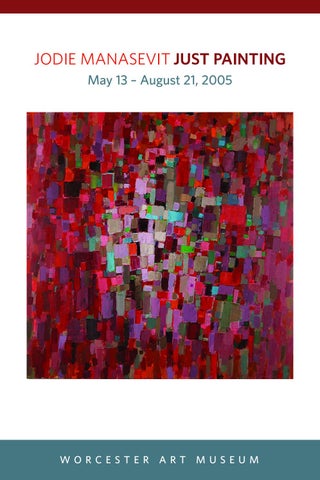 Jodie Manasevit: Just Painting “We have been trained to see painting as ‘pictures,’ with storytelling connotations, abstract or literal, in a space usually limited and enclosed by a frame which isolates the image. It has been shown that there are possibilities other than this manner of “seeing” painting. An image could be said to be “real” if it is not an optical reproduction, it if does not symbolize or describe so as to call up a mental picture. This ‘real’ or ‘absolute’ image is only confined by our limited perception.” —Robert Ryman 1

ver the past decade, Jodie Manasevit has explored how “just” the stroke of a pigmentladen brush can be both the subject of a painting and the organizational structure of its composition. This exhibition traces her works’ evolution from the literal experience of the “brick” paintings (oil on paving stones) from the early 1990s, to the complex strata and rhythms of the “stroke” paintings, to her most recent canvases. Throughout changes in materials and

execution over the years, Manasevit has remained focused on her desire to “work with color, to freeze color, to just look at color.”2 Hers is a kind of painting sensibility that is divested of the need for symbolic reference in order to concentrate on painting’s essential elements—brushstroke, color, space. While some might misconceive this practice as narrow or dispassionate, Manasevit’s revelry in the subtleties and refinements of paint applied to a surface (“painting” as a verb), infuse the finished object (“painting” as a noun) with her deep satisfaction and absorption in painting’s material conditions. As she has written, “Each painting develops as I work with the color, the space, the mark-making, the forms. Whether I am working within or without a preconceived structure, the possibility for surprise and discovery is always there. When it’s not, I know it’s time to move on.” Manasevit’s practice is indebted to the pared visual vocabularies and selfimposed restraint of painters like Agnes Martin and Robert Ryman. Like them, Manasevit has focused her activity in the studio on exploring paint’s specific capacities. It is a conceptual approach that is applicable to all painted art, whether abstract or illusionistic—one that sensi-

tizes us to perceive a reality of “just painting” that might supersede looking for what is symbolically pictured in a painting. It is a liberating chapter in the rich history of the medium. Not only is painting no longer bound by traditional categories such as figuration or abstraction, landscape or portraiture, it no longer bears the burden of carrying on its traditional function as a window on the world. In a visual culture long ago redefined by the mimetic capabilities of photography and dominated today by the prevalence of time-based, electronic media, painting has become especially relevant because it can heighten our sensitivity to the very act of looking. When we begin to see how a painter like Manasevit “gets the paint across” simultaneously as an activity and an idea, our perceptual capacities are deepened. “The paintings are literally paintings—paint applied to surfaces…Any one of these rectangles is simply a painting, as a tree, for instance, is simply a tree…They are to be explored, and to be accepted in their totality and imperfections, like a tree.” 3 With her “brick” paintings (so obvious in their execution that they effectively stifle typical questions of process), Manasevit collapsed color, gesture, surface, and support into one experience (or “totality”). Within the apparently narrow para-

meters established by the physical character of the paving stone—a brush width the same as that of the stone, the application of paint in one downward swipe of the brush—seemingly endless color relationships accrue as Manasevit responds to the previously painted brick. Employing variations on the modernist grid, with bricks presented in single and multiple rows, on pine shelves (Shelf) or directly on the wall (5 in a Row #2), Manasevit directs our attention to the physical intervals and visual pauses occurring between bricks in some cases, and in others to a contiguous band of color gently touching color. During the 1990s, Manasevit applied the horizontal band as an organizational structure to other kinds of repeated and abstracted shapes (primarily the silhouette of a handwritten word, or the arc of a single cursive letter) before making her way from the gesture of writing back to

the trace of the paint-laden brush. From the compositional order of the “stroke” paintings (either 4 or 5 uneven rows of vertical brushstrokes running from edge to edge of a square canvas), a symphony of chromatic contrasts and rhythms unfolds. In the drama of hundreds of colors/gestures, legible individually and as overlapping layers of varying densities and alignments (First Chances and Untitled P, for example), we see the recent history of Manasevit’s deft decisions and improvisations, and glimpse another entire world behind every stroke and between every row. Color, interval, and touch remain at the heart of Manasevit’s most recent paintings. Yet compared to the earlier “brick” and “stroke” paintings, the path from the finished work to the paint tube now seems harder to imagine. In Yellow Pink Stripe, Manasevit focused on one row of the stroke paintings’ format for an entire composition, elongating the vertical tracks of paint, varying their widths, and exploring how they do or don’t touch one another (unintentionally recalling the physical spaces between the bricks in some configurations). In doing so, the intervals between color bands began to take on a different and more critical role, sometimes (as in Grey Orange Stripe) housing intimate yet lively “activity” of smaller, interlocking blocks of paint. Less predictable or strictly governed by the geometric structure of their support than previous paintings (whether the rectangular paving stone or the canvas’s grid of tightly woven threads),

this microcosm of colors/gestures in Manasevit’s most recent works is more mosaic-like in structure. This once confined passage now blankets an entire field (Greenorangespace), which in some cases is as large as a 77” square (Red 77). Never complacent with previous discoveries, Manasevit continues to stretch, probe, and refine the possibilities of “just painting.”

About the Artist Jodie Manasevit, who lives in Brookline, Massachusetts, was born in 1951 in Bridgeport, Connecticutt. She reveived a BS from City University of New York in 1983 and MFA from Hunter College in New York in 1985. She has taught courses in painting and drawing at several institutions including the Massachusetts College of Art, and is currently on the adjunct faculty of Northeastern University in Boston. Since the mid-1980s, Manasevit has participated regularly in group exhibitions throughout the Northeast, including projects at White Columns, Condeso Lawler, and Margaret Thatcher in New York City, and in Boston at Mario Diacono, Allston Skirt Gallery, and the Boston Center for the Arts. She has shown her work in solo exhibitions at the Jersey City Museum, New Jersey; White Columns, Condeso Lawler, and Eich Space, New York City; Diacono Fine Art, Boston; Roger Williams University, Bristol, Rhode Island. Manasevit is represented in Boston by Diacono Fine Art. 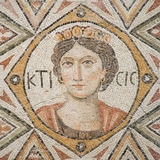