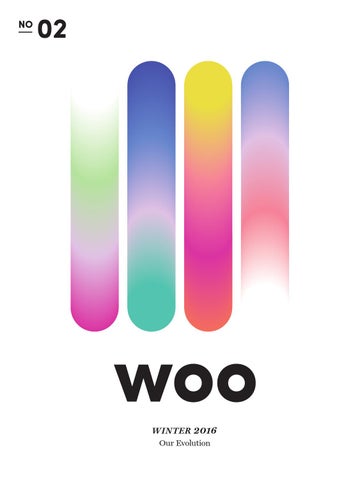 Editor’s Letter Woo is a publication built on experimentation. If evidence is needed, look no further than the archives of Woo’s ninetyyear existence; it is a collection that spans many modes, including newspaper, small brochure, and even vinyl record. In the interest of sharing this diverse history, our editorial team has combed these archives for Woo’s most compelling iterations. The selected works can be seen in our very first exhibition, Who is Woo?, held in the Emily Carr library. Despite these many evolutions, our Winter 2016 issue maintains the direction that has characterized our past five years. Its priority is the work of students from all facets of the Emily Carr community. Through the equal promotion of their art, media, and design we hope not only to celebrate their creation, innovation and conceptualization, but also to document our current creative epoch. This issue represents a refined, yet energetic, moment in Woo’s narrative. The dynamism and colour of its many gradients demonstrate Woo’s ever-changing state, and challenge the austerity that so often surrounds exhibited art. We feel privileged to be a part of a creative community that so consistently delivers new and exciting works for presentation in our publication, and it is with great pleasure that we dedicate this issue to the 90 years of student culture that have kept Woo alive and thriving.

BETWEEN THE LINES Rydel Cerezo 2015 (left)

Come have tea with us. We have missed You Have the yellow chair, if you Like the nuts that fell out Of my hands and onto my Plate are tired, partial dreams. The lady is coy. She needs someone Like you Worth saying goodbye to.

Here we are Bronwyn Carere

Almost seven billion, five-hundred million. Growing at a rate of 1.13% per year. Distended, loose, and fleshy. Curdled necks arching into lengthening jowls that tremble to the bus’ motor.

Rubbing bodies like flint. Searching for sparks. Lacking tinder. We hiccup, because we’re homesick for the sea. Develop hernia, because vertical spines don’t cradle the guts. Choke, because that is the price of an oral language.

The dolphin is capable not only of speech but of auditory projections—a marine hologram. The dolphin can assign personal identity, is self aware, learns, and feels. It does not choke, or pass its intestines. It never left the sea, save to sate the human whim.

Let them float in fetid tanks. Let them mimic human motion. Here we are in the bleachers, seven billion, five-hundred million. staring into the water: wave, clap, speak.

DISPLACEMENT: NOT OF THIS WORLD Joy Kim 2015

ARCHIVE (LOOKING FOR YOU) Polina Lasenko 2015

hat is art’s purpose and what constitutes art? The past ninety years prove that the answers to these questions change along with the times. What we know now as Emily Carr University of Art+Design started off as The Vancouver School of Decorative + Applied Arts in 1925. The school was founded with the dedication of Mr. Charles H. Scott and Mr. Marega, the modelling (what we’d now call sculpture) teacher at the time. The school’s main location was near Victory Square in historic Gastown. The students studied subjects such as modelling, painting and drawing, commercial art, design and costume design. The initial annual student publication, The Paint Box, was first released in June of 1926. Based on the written accounts, these early students went on field trips to Stanley Park and enjoyed sketching on picnics. They produced a Christmas

play and even hosted a grandeur Beaux-arts ball in the fall semester. Through reading The Paint Box, it becomes clear that the art students of this time valued humor and the publication features a section called “Arty Jokes.” Although studying art seems especially romantic in the early twentieth century, the students explain that with good art comes hard work. Unfortunately, there is a significant gap between student publications. The publication X, which ran from 1978-1980, first initiated the ground for political debate and left an important space for student writing. There is a drastic shift in tone in regards to the 1980 move to the Granville Island campus. The publications of the early ‘80s possess a similar format to a zine and have a handmade aesthetic. In an era lacking reliable digital graphics, the self-expression of the students were at an all time high. Five untitled

publications were a product of Douglas Coupland in partnership with Angela Grossman. The students, similar to today, loved Art Perry and took every opportunity to make a pun of his name. Many past publications have content written by faculty as well. The format of the student publication in 1986 transformed into a newspaper called Planet of the Arts. The publication signals a new era of politics and art. The publication was started by Naomi Singer, who strongly believed in community at Emily Carr. The overall tone of the publication becomes more political. The students felt freedom to voice their opinions on what the school did well, and also what it was doing wrong.

There was a student who wrote to the Letter to the Editor section every issue about the need for a bike rack and guess what? There is a bike rack now. Considering our agency is important as a student. In an article called â&#x20AC;&#x153;Dear MLEâ&#x20AC;? by Lyle Wilson in Volume 1 issue 2 of Planet of the Arts, Wilson mentions a lack of communication in administration. He addresses the issue of the mixed bag of professors, some who were caring towards students, while the others struggled to find a balance between their own professional practice and teaching. Many questions Wilson addresses are valuable because we are moving to a new campus again in the near future. Moving to

Great Northern Way is a wonderful opportunity to implement any changes that are needed in the school. Starting in 2003, the present day publication, Woo, has seen a number of evolving styles. The formats range from newspaper, having ancient audio (cd and vinyl) accompanying the issue, to the glossy magazine format. The original format was perhaps inspired by it’s predecessors Influx (1998-2001) and Some Magazine(2001-2002). The publication has evolved into an art, design and media centered publication showcasing the many great works of Emily Carr students. The many reiterations can be seen as symbolizing the creative process itself. A great publication relies

on great content and as always, it is what the students make it. We are in a constant state of flux. In an interview with Henry Elder, the former director of Architecture at UBC, conducted by Planet of the Arts in 1987, Elder mentions “the purpose of art is to excite the imagination and make life worthwhile.” If an artist points to what is happening today it is a shock, but this ability is important. Perhaps analyzing and drawing inspiration from today is the best hope that we have to reach a better future. Come check out our Student Publications exhibition Who is Woo? March 4-15th in the library.

OR ANG ASLI ON THE BORDER Shaghayegh Haghdoust 2012 Watch the film at woopublication.ca/winter2016

In an in situ performance by Sun and Rosner, movement, sound and visual communication are combined to generate a sensorial exchange. Bodies engage in a dance with frequency and environment, using voice, walkie-talkie and modified amplification as their accompaniments. Threading together both unconscious and conscious choreographies of breath, sound, and movement, they explore and fuse the participation of human, earth, and animal. Through the blending of performers and site, a continuous landscape emerges in a sensory time, one where presence is offered as a partner to the land.

EVERYONE YOU HAVE EVER HEARD OF Eva Dominelli 2015

sound.jpg A photographic essay of sound

Woo is available at Emily Carr University, Read Bookstore & select locations within the City of Vancouver. The views expressed in this publication do not reflect those of Emily Carr University or the editors and publisher. Inquiries can be addressed to the Directors at woo@ecuad.ca © 2016 including all content by the artists, authors and editors. All images are reproduced with the permission of its artists. Woo gratefully acknowledges the support of students, alumni, faculty, the Student Union, and the Administrative Board at Emily Carr University. website woopublication.ca email woo@ecuad.ca facebook /woopublication twitter @woopublication blog woopublication.tumblr.com Printed with MET Fine Printers. The typefaces used in this publication are Sofia Pro—designed by Mostardesign studio Miller Text­— designed by Matthew Carter This issue is limited to 450 copies. Woo Publication Room 241B North Building 1399 Johnston Street, Granville Island Vancouver, BC V6h 3R9 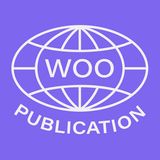