202YOU Worcester Bravehearts Season In Review 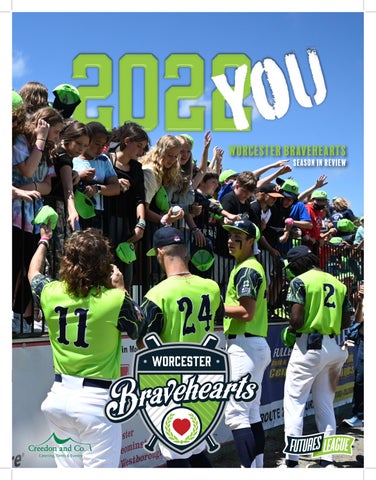 The Worcester Bravehearts offense set many records in 2022. That offense was led by The Futures League MVP Gavin Noriega. The first-baseman hit .362 and broke the franchise record for hits and doubles in a single season. Outside of stats, Andrew Chronister also took home a league award as he was named the Adam Keenan Sportsmanship Award winner. Chronister was a crucial part of the Bravehearts community relations efforts as he worked summer camps, attended community relations events and participated in the team’s Pen Pal Club.

This season, the Worcester Bravehearts sent seven members of their team to the All-Star game in 2022, including six position players. Worcester third baseman Jake Marquez took home the AllStar Game MVP, while Bravehearts catcher Cam Seymour finished as the Runner-Up in the league Home Run Derby.

The Worcester Bravehearts have been the premier team in The Futures League in regards to prolevel talent. Cleveland Guardians pitcher Aaron Civale pitched for Worcester in 2014 and made his MLB debut in 2019. As the former ‘Hearts continue to develop in the minors, look for multiple Bravehearts to make their MLB debuts in the near future. Former 2018-19 Braveheart Dustin Harris was named the Texas Rangers 2021 Minor League Player of the Year while 2016 Braveheart Ryan Ward recently broke the Los Angeles Dodgers Minor League SingleSeason Home Run Record.

In 2022, the Bravehearts became the first team in organized baseball history to debut “Rally Jerseys”. If the team was losing after the 7th inning, they would actually change jerseys in-between innings to attempt to get a rally started. The jersey, modeled after GM Dave Peterson’s “Rally Jacket” is also accompanied by our “tequila rally” with music and staff members going through the stands with signs and costumes in an attempt to distract the opposing pitchers.

A big part of the Bravehearts 2022 season was getting the fans to feel like they were a part of the game. Similarly, we wanted the players to feel like they were part of more than just the baseball game. In the 2022 season, it was quite normal to see players walking through the stands, sitting with fans, and even participating in the team’s in-between inning promotions.

On June 7th and 8th during the Bravehearts Baseball in Education Days, the team selected one rule per inning to implement into the game. The result was an inning of kickball, rock-paper-scissors to determine out or safe, a pie in the face if you strike out, and much more! Over 6,000 students got to witness one of these games as both were sold out, and the Bravehearts were even able to provide bussing for some schools in the Worcester area who normally would not be able to afford transportation to the game.

Throughout the offseason, the Bravehearts went to local elementary schools and asked for students to come up with crazy rules they would like to see during a baseball game.

The Bravehearts have always provided a great show during our home games, so this offseason we thought it would be cool to bring the show to YOU. Throughout the months of April and May, the Bravehearts debuted their “Little League Takeovers” where they went to local little leagues and brought their mascot, PA announcer, DJ and promotions team to put on a show during a youth baseball game. There were player announcements, music, t-shirt tosses and on-field promotions just like at a Bravehearts game!

Over the last two seasons, the Bravehearts have worked closely with Be The Match to spread awareness of the National Bone Marrow Registry. Every Friday Night, the team would wear their “Friday Night Bright” Neon Green Jerseys with the Be The Match Logo. Bravehearts Owner Julie Creedon-Linton has a personal relationship with Be The Match her son Bryce was part of the program after diagnosed with Hyper IGM. This year, the Bravehearts hosted a design-a-jersey contest where fans had the opportunity to design a jersey to be worn by the team. A friend of Bryce, Brooke, won the contest with a TieDye design. “I want the donation to go to the place that helps Bryce” she said. Since Bryce’s diagnosis, Julie has spearheaded the “Brothers for Bryce” Campaign, helping to encourage over 2,200 people to enter the registry through her campaign.

In 2022, the Worcester Bravehearts continued their Pen Pal program, where members of the team would write letters to members of the communities at Open Sky and EasterSeals. Throughout the season, these players and senior citizens had the opportunity to learn about each other before ultimately meeting for the first time on the last game of the season. The Bravehearts hosted a pregame cookout where the pals could talk over burgers, hot dogs and chicken sandwiches!

After two years of being away from schools due to the Covid-19 pandemic, the Bravehearts got right back to their school visits in 2022. The team would bring their mascot Jake The Lion and their staff members and host assemblies about the importance of reading. Any student who read ten books in a month would receive a free Bravehearts ticket, and many of these schools also got to submit rules and attend the one of the “You-ChooseThe-Rules” games as part of their participation in the reading program.

Leading up to their Camp Field Trip day where Summer Camps would come to watch the Bravehearts 10 am game, members of the team visited Summer Camps in Worcester to play kickball, wiffleball and other summer camp games. The campers were able to interact and play games with the players before going to their game on Camp Day and watching them play!

YOU COULD... kickin’ itjust SUMMER CAMP

When you look at the outfield wall of any professional team’s stadium, you may see a logo for a car dealership, a restaurant, or another business. At the Bravehearts, when you look at our 90-foot right field wall, you will see a mural of over 250 of our fans’ faces and 65 small business logos. In January, the team asked the community to submit selfies and logos of their locally owned business to be displayed on the team’s right field wall for the entire season. The result was a fantastic mural called our “Home is Where the ‘Hearts Are” wall that showcased the Worcester community and those businesses that keep it running.

Over 330 children were a part of the Bravehearts two summer camp weeks in the middle of July. Campers learned the fundamentals of baseball, while also learning the keys to sportsmanship. The counselors were made up of Bravehearts players and coaches, who the campers would then have the opportunity to watch later in the night during the team’s home games of that week!

On July 29th, the Bravehearts hosted their annual Military Appreciation Night. For this night, the Bravehearts worked with organizations such as Project New Hope, Veterans Inc, and Clear Path for Veterans to offer free tickets to all active duty and military veterans.

On July 9th, the Bravehearts home game against the Brockton Rox was broadcast live on NESN. As part of the promotion the team hosted a “sign day” where fans were encouraged to make a sign about their favorite player to possibly be shown on TV. While some fans made signs for players, others wrote special messages to loved ones at home or even a quick promotion for their business!

On July 14th, the Bravehearts hosted Craft Beer Night at the Ballpark. 14 of the area’s best local breweries came out for a night of baseball, beer sampling and live music! All participants were treated to beer samples and an All-You-Can-Eat experience throughout the entire game!

“Bark in the Park” is a promotion popular around Minor League Baseball where fans can bring their furry friends into the game, but the Bravehearts took this one step further. During their Bark in the Park night, the dogs stole the show, as there was a dog vs human pie eating contest, a “dog run” where dogs could run through the outfield in the sixth inning, and even a “dog YMCA dance” to end the night!

We could not be more thrilled with our first season as a sponsor of the Bravehearts. Not only was their team easy to work with and flexible, but we felt we received tremendous value in showcasing our brand to the Bravehearts faithful which includes our target demographic. From tabling at home games, to on-field signage, to our sponsoring of the t-shirt toss and Little League Takeovers, the Bravehearts executed our agreement perfectly and allowed us to be involved in every step of the process. We look forward to a longstanding relationship with the team going forward!

“I enjoyed the game and I met the players.”

As the Director of Community Membership for Open Sky Community Services, it has been exciting to offer the Pen Pal Club opportunity to individuals we serve for the past two years. Open Sky’s mission is “Blending best practices with the power of community...” and we are thrilled to have the Worcester Bravehearts as a Community Partner! Working with the Bravehearts has been a great experience. One of our Pen Pal Participants, Lori, is a huge baseball fan and uses a wheelchair and had the opportunity to throw the first pitch at a game. She worked with her physical therapist so that she could stand up from her wheelchair just before throwing the first pitch, and she succeeded! The expression on her face was priceless as she stood on the mound sharing the moment with her family and everyone in the stadium.

Thank you so much Aaron! You are such a great inspiration to Rob and a great role model.

We booked an outing for our company at a Worcester Bravehearts game and could not have had more fun. We were greeted with free hats and brought over to our own private tent with a lobster bake ready for us. The food was incredible, and the team was also hosting one of its many great local events, this one being a craft beer night with local breweries in attendance. We were set up in a section right behind the Bravehearts dugout, and we were even brought down onto the field to participate in events in some of their great on-field promotions! Going to see any baseball game would have been fun, but the Bravehearts really elevated the experience in catering so well for us as well as including us in the evening’s events. We were thrilled with the experience and the team has already agreed we would like to attend future games.

From a personal viewpoint, I find the Bravehearts to be very hospitable. I appreciated every interaction with each member of the Bravehearts staff. They are professional, friendly, and clearly committed to guests having the best experience possible.

“Enjoyed the games and got some autographs!”

“I danced at the ballgame!”

Rob loves baseball so much. I have to say, Aaron was a critical part for Rob to achieve his dream to be part of the All-Star Team. The Bravehearts organization is beyond lucky to have someone like him as part of the team!!!

“I loved that the baseball players signed my hat.”

I can’t thank you enough for all your support and for helping him reach his dream of making the all-star team!

202YOU Worcester Bravehearts Season In Review 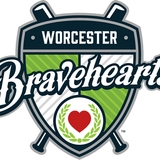