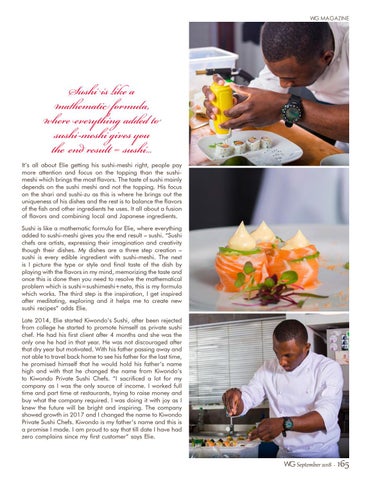 Sushi is like a mathematic formula, where everything added to sushi-meshi gives you the end result = sushi...

It’s all about Elie getting his sushi-meshi right, people pay more attention and focus on the topping than the sushimeshi which brings the most flavors. The taste of sushi mainly depends on the sushi meshi and not the topping. His focus on the shari and sushi-zu as this is where he brings out the uniqueness of his dishes and the rest is to balance the flavors of the fish and other ingredients he uses. It all about a fusion of flavors and combining local and Japanese ingredients. Sushi is like a mathematic formula for Elie, where everything added to sushi-meshi gives you the end result – sushi. “Sushi chefs are artists, expressing their imagination and creativity though their dishes. My dishes are a three step creation – sushi is every edible ingredient with sushi-meshi. The next is I picture the type or style and final taste of the dish by playing with the flavors in my mind, memorizing the taste and once this is done then you need to resolve the mathematical problem which is sushi=sushimeshi+neta, this is my formula which works. The third step is the inspiration, I get inspired after meditating, exploring and it helps me to create new sushi recipes” adds Elie. Late 2014, Elie started Kiwondo’s Sushi, after been rejected from college he started to promote himself as private sushi chef. He had his first client after 4 months and she was the only one he had in that year. He was not discouraged after that dry year but motivated. With his father passing away and not able to travel back home to see his father for the last time, he promised himself that he would hold his father’s name high and with that he changed the name from Kiwondo’s to Kiwondo Private Sushi Chefs. “I sacrificed a lot for my company as I was the only source of income. I worked full time and part time at restaurants, trying to raise money and buy what the company required. I was doing it with joy as I knew the future will be bright and inspiring. The company showed growth in 2017 and I changed the name to Kiwondo Private Sushi Chefs. Kiwondo is my father’s name and this is a promise I made. I am proud to say that till date I have had zero complains since my first customer” says Elie.