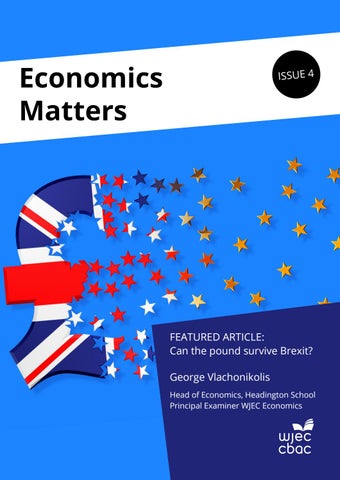 A snapshot of the Welsh economy – summer 2016

Can the pound survive Brexit? by George Vlachonikolis On 16 September 1992 the UK left the exchange rate mechanism of the European Monetary System. It caused a catastrophic collapse in the value of the pound and commentators wondered publically whether it would ever survive. 25 years on, and in the wake of the 2016 Brexit vote, it feels a little like history is repeating itself. This article will seek to ask why the value of the pound fell so dramatically in the aftermath of Brexit and then question whether or not we should be worried about its survival.

Economics Matters • Issue 4 • Page 2 Sterling has been very sensitive to geopolitical shocks over the last 3 decades. And, arguably, the crashes that followed Black Wednesday and the Credit Crunch were more severe than the one after Brexit. That said, on 23 August 2016 (just 2 months after the vote), sterling fell to an all-time record low against the Euro (see Figure 1). Such an unprecedented low obviously warrants closer investigation. Remember this! Exchange rates are very important for an economy like the UK for the following reasons:  Exchange rates affect the price of exports and the likely competitiveness of those goods/services on the world market.  Exchange rates are a cost to a firm in the form of commission paid on the exchange of one currency for another.  If firms hold assets in currencies other than sterling, exchange rates pose a risk. So what caused the fall? It certainly wasn’t a fall in inward investment. In 2016 the UK was still Europe’s most attractive location for international investment; in fact, it achieved its highest ever level of inward investment and a total of 1,144 new foreign direct investment (FDI) projects were agreed. In September 2017 the Global Financial Centre Index (GFCI - a ranking of the competitiveness of financial centres based on over 29,000 financial centre assessments) still ranked London as the world leader. If not inward investment, the trade balance? Well, as it happens UK exports have actually picked up significantly since the Brexit vote. Monthly export sales have increased by an average of £2bn compared to last year. In particular, ONS data in Figure 2 shows that exports to the EU have increased by 2% in Q2 2017.

Sadly the UK has not seen the rise in AD that may have been expected. Imports have been rising too and this has counter-balanced the positive benefits of a rise in exports (see Figure 3). The UK continues to import many price inelastic goods (such as raw materials and agricultural produce). As a result, the country continues to run a trade deficit which pushes down on the value of sterling. Critically, however, that trade deficit has not grown significantly since Brexit. And so, it is not the trade deficit which has depreciated sterling.

Instead, the answer lies in ‘hot money’; the speculative flows of money frequently transferred between financial institutions in an attempt to maximise interest and/or capital gain. The speed of depreciation after the Brexit vote (it fell 10% in the first 24 hours) shows that only speculative selling off can be responsible. There is no time lag in foreign exchange markets. The Brexit vote was unexpected and most people struggled to understand its economic consequences. Studies prior to the vote warned there would be serious negative effects on the economy and that was what most people feared on 24 June 2016. A mass sell-off resulted.

Economics Matters • Issue 4 • Page 5 What were speculators scared of? -- A fall in GDP growth as the market for exporting firms started to shrink. -- The Monetary Policy Committee might have to decrease the Bank Rate further in order to stimulate demand. -- A decline in the attractiveness of sterling as a reserve currency. To what extent were these worries well founded? A fall in GDP In 2015, before the Brexit storm, the UK was amongst the fastest-growing G7 economies. By 2017, however, it had slipped to the bottom of the pile with Italy. The slow growth is itself evidence that Brexit has had a dampening effect on growth. That said, several credit rating agencies are on record as saying that the Brexit-related slowdown had been less serious than expected. In fact several have raised their growth forecasts for 2017 Q4 as a result. Figure 4: G7 countries (quarterly) growth rates 2015-17

Source: Office for National Statistics (ONS) and Organisation for Economic Co-operation and Development

Economics Matters • Issue 4 • Page 6 Monetary Policy There was an immediate response from the Bank of England; they moved quickly to keep the financial system safe and sound by cutting Bank Rate 0.25% in August (the lowest in history!) and restarted its QE campaign. Towards the end of 2016 many analysts were expecting a further bank rate cut to the lower bound of 0.05%. Of course, fast forward a year later and the MPC is now beginning to make noises that an interest rate increase could soon be on the way. Inflation is nearing the upper target level and with Mark Carney’s 2018 resignation date on the cards as well, it would be easy to see a (small) rise before the year is out. Reserve currency status Sterling’s reserve currency status is not in jeopardy and there are several reasons for this. Firstly, the IMF has itself committed to holding sterling as one of the five currencies that make up its own foreign-exchange reserve assets (known as Special Drawing Rights). These are the funds that the IMF can use to make loans to countries in need of financial support. Secondly, the share of sterling in global currency reserves has remained relatively constant at 5% for the last 40 years. Given such a low level, the share is unlikely to fall to zero regardless of any FDI volatility following Brexit. Thirdly, the largest holders of sterling in the world are several key Asian nations with which the UK will be trying to forge new trade agreements after Brexit. As a result, the foreign reserve managers of these nations will want to hold on to sterling in order to protect themselves from possible trade shocks in the future.

Economics Matters • Issue 4 • Page 7 Conclusion It seems then that there are some good reasons to be optimistic about the value of sterling going into the future. Its status as a reserve currency seems assured for at least another 10 years. In addition, an expected rise in the Bank Rate should see an increase in speculative flows back to the UK. Economic growth, ultimately, is not performing as badly as many had expected before they sold their holdings. For some commentators, this may imply that sterling is currently under-valued and it could see an upward turn before long. The problem is that Brexit still has a long way to go. Negotiations are far from smooth and there is as much uncertainty about the ‘end state’ as there has ever been. The depreciation of the pound was caused by speculators scared off by Brexit uncertainty. And this uncertainty remains. So whilst there are some reasons to be positive (above), and this may prevent further collapse for now, there are not enough positives to convince speculators that all is rosy. Sterling will thus survive but it is likely that the success (or otherwise) of the Brexit negotiations will have the most significant impact on the value of sterling for a long time to come. George Vlachonikolis Head of Economics, Headington School Principal Examiner WJEC Economics 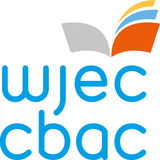 Can the pound survive Brexit? by George Vlachonikolis

Can the pound survive Brexit? by George Vlachonikolis