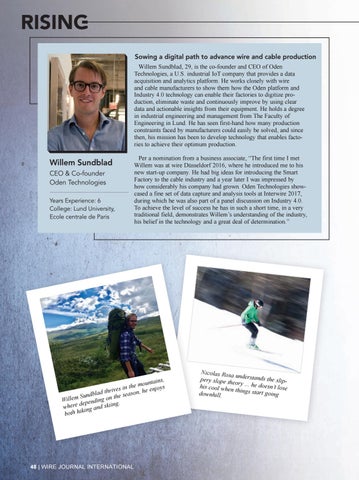 Sowing a digital path to advance wire and cable production Willem Sundblad, 29, is the co-founder and CEO of Oden Technologies, a U.S. industrial IoT company that provides a data acquisition and analytics platform. He works closely with wire and cable manufacturers to show them how the Oden platform and Industry 4.0 technology can enable their factories to digitize production, eliminate waste and continuously improve by using clear data and actionable insights from their equipment. He holds a degree in industrial engineering and management from The Faculty of Engineering in Lund. He has seen first-hand how many production constraints faced by manufacturers could easily be solved, and since then, his mission has been to develop technology that enables factories to achieve their optimum production.

Per a nomination from a business associate, “The first time I met Willem was at wire Düsseldorf 2016, where he introduced me to his new start-up company. He had big ideas for introducing the Smart Factory to the cable industry and a year later I was impressed by how considerably his company had grown. Oden Technologies showcased a fine set of data capture and analysis tools at Interwire 2017, during which he was also part of a panel discussion on Industry 4.0. To achieve the level of success he has in such a short time, in a very traditional field, demonstrates Willem’s understanding of the industry, his belief in the technology and a great deal of determination.”

The wire and cable industry may be a mature industry, but one does not have to look far to see that it has its share of talented young professionals. This feature presents “a baker’s dozen” of profiles of individuals who have been identified as key industry contributors. A few are not that long out of college, while others have laid down more of a footprint. 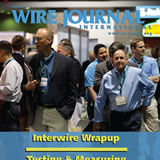