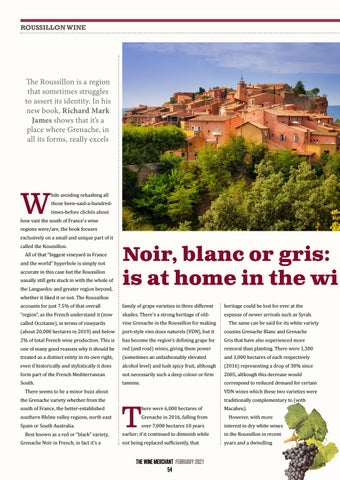 The Roussillon is a region that sometimes struggles to assert its identity. In his new book, Richard Mark James shows that it’s a place where Grenache, in all its forms, really excels

how vast the south of France’s wine regions were/are, the book focuses

exclusively on a small and unique part of it

usually still gets stuck in with the whole of

Noir, blanc or gris: G is at home in the wi

accounts for just 7.5% of that overall

heritage could be lost for ever at the

All of that “biggest vineyard in France

the Languedoc and greater region beyond, whether it liked it or not. The Roussillon

“region”, as the French understand it (now called Occitanie), in terms of vineyards

2% of total French wine production. This is one of many good reasons why it should be treated as a distinct entity in its own right, even if historically and stylistically it does form part of the French Mediterranean South.

There seems to be a minor buzz about

the Grenache variety whether from the south of France, the better-established

Best known as a red or “black” variety,

Grenache Noir in French, in fact it’s a

vine Grenache in the Roussillon for making has become the region’s defining grape for red (and rosé) wines, giving them power (sometimes an unfashionably elevated

alcohol level) and lush spicy fruit, although not necessarily such a deep colour or firm tannins.

earlier; if it continued to diminish while not being replaced sufficiently, that

expense of newer arrivals such as Syrah.

The same can be said for its white variety

Gris that have also experienced more

removal than planting. There were 1,300 and 1,000 hectares of each respectively

correspond to reduced demand for certain

VDN wines which these two varieties were traditionally complementary to (with Macabeu). February 2021 edition of The Wine Merchant magazine, a trade publication for specialist independent wine merchants in the UK

February 2021 edition of The Wine Merchant magazine, a trade publication for specialist independent wine merchants in the UK