Review of Mindfully Facing Disease and Death in Buddhadharma 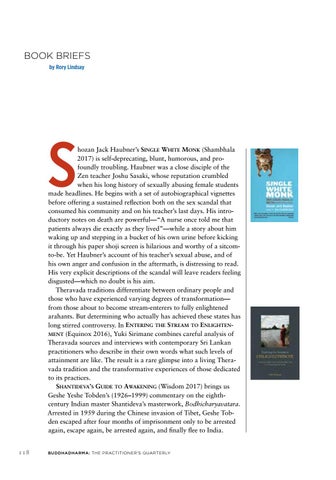 hozan Jack Haubner’s Single White Monk (Shambhala 2017) is self-deprecating, blunt, humorous, and profoundly troubling. Haubner was a close disciple of the Zen teacher Joshu Sasaki, whose reputation crumbled when his long history of sexually abusing female students made headlines. He begins with a set of autobiographical vignettes before offering a sustained reflection both on the sex scandal that consumed his community and on his teacher’s last days. His introductory notes on death are powerful—“A nurse once told me that patients always die exactly as they lived”—while a story about him waking up and stepping in a bucket of his own urine before kicking it through his paper shoji screen is hilarious and worthy of a sitcomto-be. Yet Haubner’s account of his teacher’s sexual abuse, and of his own anger and confusion in the aftermath, is distressing to read. His very explicit descriptions of the scandal will leave readers feeling disgusted—which no doubt is his aim. Theravada traditions differentiate between ordinary people and those who have experienced varying degrees of transformation— from those about to become stream-enterers to fully enlightened arahants. But determining who actually has achieved these states has long stirred controversy. In Entering the Stream to Enlightenment (Equinox 2016), Yuki Sirimane combines careful analysis of Theravada sources and interviews with contemporary Sri Lankan practitioners who describe in their own words what such levels of attainment are like. The result is a rare glimpse into a living Theravada tradition and the transformative experiences of those dedicated to its practices. Shantideva’s Guide to Awakening (Wisdom 2017) brings us Geshe Yeshe Tobden’s (1926–1999) commentary on the eighthcentury Indian master Shantideva’s masterwork, Bodhicharyavatara. Arrested in 1959 during the Chinese invasion of Tibet, Geshe Tobden escaped after four months of imprisonment only to be arrested again, escape again, be arrested again, and finally flee to India.

After years of monastic training and teaching, he was able to leave the monastery and live in a little stone house above McLeod Ganj, where he could focus on meditation. But a serious illness brought him out of isolation, and after meeting and impressing some eager Italian students, he soon found himself a resident teacher in Italy, where he gave this commentary. Edited by Fiorella Rizzi, this outstanding volume provides a Mahayana road map for self-cultivation, adhering closely to Shantideva’s chapters yet drawing deeply from Geshe Tobden’s own profound training and experiences. Zen is often praised for its apparent minimalism, but Zen temples, literature, and practices are in fact full of things, from staffs to beads to paintings to tea bowls to rags. Zen and Material Culture (Oxford 2017), edited by Pamela D. Winfield and Steven Heine, explores the physical stuff of Zen. In her chapter on visual culture in Rinzai Zen convents, Patricia Fister examines the legacies of Daitsu Bunchi and Tokugon Riho, two seventeenth-century nuns who spent decades creating material expressions of their devotion. Bunchi, in addition to making images of Kannon and clay portraits of past masters, copied out canonical Buddhist works using her own blood and even cut a square of skin from her hand and wrote a sutra passage on it. Riho, meanwhile, produced beautiful paintings of nuns and priests, statues and paintings of Shakyamuni and Kannon, and fine works of calligraphy that were distributed all over Japan. Such material creations, Fister concludes, were at the core of these women’s religious lives. In a different vein, Paula Arai examines “the meaning and metaphysics of Zen rags,” following Dogen’s famous claim that all things are buddhanature—rags included. She considers how in a Soto Zen context, rags can be roshis, “practice enlightenment,” be healers, and accompany us in daily life and thus in all manners of Zen practice. Amy Paris Langenberg’s Birth in Buddhism (Routledge 2017) offers a brilliant analysis of suffering in early Indian Buddhist literature, highlighting its basic connection with birth and the impact of this connection on the lives of Buddhist men and women. With suffering and birth equated, women were cast as sources of suffering, which in turn gave way to a Buddhist literature of disgust that transformed “the beautiful sexualized and fertile female form into something ugly and repugnant.” Monks, meanwhile, faced the challenges of celibacy while ironically becoming “birth experts” through the production and study of texts on the development of the fetus. While such works described the stages of human development so that monks could better understand and ultimately free themselves from birth altogether, these works also reinforced negative attitudes toward the female body.

In Mindfully Facing Disease and Death (Windhorse 2016), Bhikkhu Analayo brings his usual blend of scholarly erudition and practical vision to the morbid inevitabilities of human life. Framing suffering as a disease, he draws on early Buddhist texts to chart a “cure” in the form of mindful living, starting with the four truths and the eightfold path. He argues that these foundational Buddhist teachings allow us to cultivate a healthy mind in spite of a sick body, remaining aware of the “fluctuating physical sensations of pain” without succumbing to the natural impulse to own this pain as “mine.” He also looks to early Buddhist works for guidance on palliative care. In one passage, the Buddha offers advice to laypeople on how to care for the sick and dying: help them gradually let go of their attachments to family, friends, and possessions and stay by their side to encourage them as they make progress. Analayo notes that this process can happen naturally if the dying allow the full implications of mortality to work on their minds. Is realization cultivated over time, or does it happen in an instant? In Robert Buswell’s Numinous Awareness is Never Dark (Hawai’i 2016), the answer from Korean master Chinul (1158–1210) is not as simple as selecting one or the other. Chinul’s Excerpts, which Buswell introduces, translates, and calls “the single most influential work ever written by a Korean author,” offers an approach that involves both sudden awakening and gradual cultivation. Chinul argues that an initial moment of insight occurs when we recognize that our own nature is identical to that of all the buddhas; however, our practice is usually too underdeveloped to sustain such an enlightened perspective. Training and moral cultivation therefore become essential for removing our “residual proclivities” and applying the understanding gained from this first moment of awakening to our everyday experience. Jamyang Khyentse Chökyi Lodrö (1893–1959) mastered a vast number of practice traditions from across Tibetan Buddhism’s lineages and mentored many of the lamas who would work to establish Tibetan Buddhism in exile. The Life and Times of Jamyang Khyentse Chökyi Lodrö (Shambhala 2017) brings us personal stories about this influential figure collected by Orgyen Tobgyal Rinpoche as well as a translation of Chökyi Lodrö’s spiritual biography authored by Dilgo Khyentse Rinpoche, complete with archival photographs. From his early years as a recognized reincarnation of the Rime master Jamyang Khyentse Wangpo (something he denied and deemed impossible), to his establishment of the now legendary Khamje Shedra monastic college in eastern Tibet, to his controversial taking of a consort, the stories in this volume reveal (to echo Dzongsar Khyentse’s introduction) the man as much as they do the master, making this a fascinating and intimate read.

Review of Mindfully Facing Disease and Death in Buddhadharma

A 'book brief' from the winter edition (2017) of Buddhadharma Magazine. Find the book as paperback and eBook on the Windhorse Publications website: https://www.windhorsepublications.com/product/mindfully-facing-disease-and-death-compassionate-advice-from-early-buddhist-texts 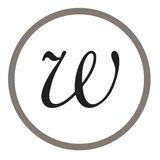