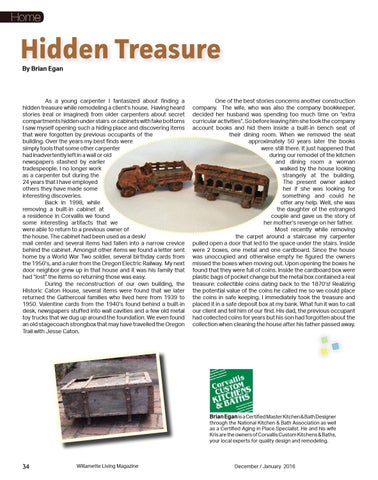 As a young carpenter I fantasized about finding a hidden treasure while remodeling a client’s house. Having heard stories (real or imagined) from older carpenters about secret compartments hidden under stairs or cabinets with fake bottoms I saw myself opening such a hiding place and discovering items that were forgotten by previous occupants of the building. Over the years my best finds were simply tools that some other carpenter had inadvertently left in a wall or old newspapers stashed by earlier tradespeople. I no longer work as a carpenter but during the 24 years that I have employed others they have made some interesting discoveries. Back in 1998, while removing a built-in cabinet at a residence in Corvallis we found some interesting artifacts that we were able to return to a previous owner of the house. The cabinet had been used as a desk/ mail center and several items had fallen into a narrow crevice behind the cabinet. Amongst other items we found a letter sent home by a World War Two soldier, several birthday cards from the 1950’s, and a ruler from the Oregon Electric Railway. My next door neighbor grew up in that house and it was his family that had “lost” the items so returning those was easy. During the reconstruction of our own building, the Historic Caton House, several items were found that we later returned the Gathercoal families who lived here from 1939 to 1950. Valentine cards from the 1940’s found behind a built-in desk, newspapers stuffed into wall cavities and a few old metal toy trucks that we dug up around the foundation. We even found an old stagecoach strongbox that may have travelled the Oregon Trail with Jesse Caton.

One of the best stories concerns another construction company. The wife, who was also the company bookkeeper, decided her husband was spending too much time on “extra curricular activities”. So before leaving him she took the company account books and hid them inside a built-in bench seat of their dining room. When we removed the seat approximately 50 years later the books were still there. It just happened that during our remodel of the kitchen and dining room a woman walked by the house looking strangely at the building. The present owner asked her if she was looking for something and could he offer any help. Well, she was the daughter of the estranged couple and gave us the story of her mother’s revenge on her father. Most recently while removing the carpet around a staircase my carpenter pulled open a door that led to the space under the stairs. Inside were 2 boxes, one metal and one cardboard. Since the house was unoccupied and otherwise empty he figured the owners missed the boxes when moving out. Upon opening the boxes he found that they were full of coins. Inside the cardboard box were plastic bags of pocket change but the metal box contained a real treasure: collectible coins dating back to the 1870’s! Realizing the potential value of the coins he called me so we could place the coins in safe keeping. I immediately took the treasure and placed it in a safe deposit box at my bank. What fun it was to call our client and tell him of our find. His dad, the previous occupant had collected coins for years but his son had forgotten about the collection when cleaning the house after his father passed away.

through the National Kitchen & Bath Association as well as a Certified Aging in Place Specialist. He and his wife Kris are the owners of Corvallis Custom Kitchens & Baths, your local experts for quality design and remodeling. 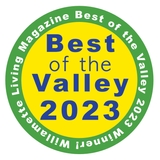