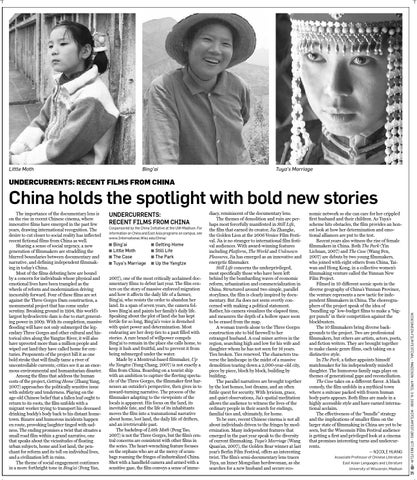 China holds the spotlight with bold new stories UNDERCURRENTS: RECENT FILMS FROM CHINA Cosponsored by the China Initiative at the UW-Madison. For information on China and East Asia programs on campus, see www.International.Wisc.edu/China/

2007), one of the most critically acclaimed documentary films to debut last year. The film centers on the story of massive enforced migration and how it affects the daily life of a farmer, Bing’ai, who resists the order to abandon her land. In a span of seven years, the camera follows Bing’ai and paints her family’s daily life. Speaking about the plot of land she has kept fertile for so long, Bing’ai’s voice is drenched with quiet power and determination. Most endearing are her deep ties to a past filled with stories. A rare brand of willpower compels Bing’ai to remain in the place she calls home, to keep it lush and fruitful, and to prevent it from being submerged under the water. Made by a Montreal-based filmmaker, Up the Yangtze (Yung Chang, 2007) is not exactly a film from China. Boarding on a tourist ship with an ambition to capture the fleeting spectacle of the Three Gorges, the filmmaker first harnesses an outsider’s perspective, then gives in to inward-turning narrative. The process of the filmmaker adapting to the viewpoints of the locals is apparent. His focus on the land, its inevitable fate, and the life of its inhabitants moves the film into a transnational narrative about home, lost land, the daily life of drifters, and an irretrievable past. The backdrop of Little Moth (Peng Tao, 2007) is not the Three Gorges, but the film’s central concerns are consistent with other films in the series. The heart-wrenching feature focuses on the orphans who are at the mercy of scumbags roaming the fringes of industralized China. Shot with a handheld camera and armed with a sensitive gaze, the film conveys a sense of imme-

diacy, reminiscent of the documentary lens. The themes of demolition and ruin are perhaps most forcefully manifested in Still Life, the film that earned its creator, Jia Zhangke, the Golden Lion at the 2006 Venice Film Festival. Jia is no stranger to international film festival audiences. With award-winning features including Platform, The World and Unknown Pleasures, Jia has emerged as an innovative and energetic filmmaker. Still Life concerns the underprivileged, most specifically those who have been left behind by the bombarding waves of economic reform, urbanization and commercialization in China. Structured around two simple, parallel storylines, the film is clearly inspired by documentary. But Jia does not seem overtly concerned with making a political statement. Rather, his camera visualizes the elapsed time, and measures the depth of a hollow space soon to be erased from the map. A woman travels alone to the Three Gorges construction site to bid farewell to her estranged husband. A coal miner arrives in the region, searching high and low for his wife and daughter whom he has not seen for 16 years. Ties broken. Ties renewed. The characters traverse the landscape in the midst of a massive demolition tearing down a 2,000-year-old city, piece by piece, block by block, building by building. The parallel narratives are brought together by the lost homes, lost dreams, and an often futile quest for security. With lyricism, grace, and quiet observations, Jia’s spatial meditation allows the audience to witness the lives of the ordinary people in their search for endings, familial ties and, ultimately, for home. To be sure, recent Chinese cinema is not all about individuals driven to the fringes by modernization. Many independent features that emerged in the past year speak to the diversity of current filmmaking. Tuya’s Marriage (Wang Quan’an, 2007), the Golden Bear winner at last year’s Berlin Film Festival, offers an interesting twist. The film’s semi-documentary lens traces Tuya, an Inner Mongolian herdswoman, as she searches for a new husband and secure eco-

nomic network so she can care for her crippled first husband and their children. As Tuya’s scheme hits obstacles, the film provides an honest look at how her determination and emotional alliances are put to the test. Recent years also witness the rise of female filmmakers in China. Both The Park (Yin Lichuan, 2007) and The Case (Wang Fen, 2007) are debuts by two young filmmakers, who joined with eight others from China, Taiwan and Hong Kong, in a collective women’s filmmaking venture called the Yunnan New Film Project. Filmed in 10 different scenic spots in the diverse geography of China’s Yunnan Province, the venture represents a new tactic for independent filmmakers in China. The choreographers of the project speak of the idea of “bundling up” low-budget films to make a “bigger punch” in their competition against the blockbusters. The 10 filmmakers bring diverse backgrounds to the project. Two are professional filmmakers, but others are artists, actors, poets, and fiction writers. They are brought together to make classic genre films, each taking on a distinctive style. In The Park, a father appoints himself matchmaker for his independently minded daughter. The humorous family saga plays on themes of generational gaps and reconciliation. The Case takes on a different flavor. A black comedy, the film unfolds in a mythical town where a suitcase packed with frozen human body parts appears. Both films are made in a highly accessible style and have earned international acclaim. The effectiveness of the “bundle” strategy and the implications of smaller films on the larger state of filmmaking in China are yet to be seen, but the Wisconsin Film Festival audience is getting a first and privileged look at a cinema that promises interesting turns and undercurrents. — NICOLE HUANG Associate Professor of Chinese Literature East Asian Languages and Literature

The importance of the documentary lens is on the rise in recent Chinese cinema, where innovative films have emerged in the past few years, drawing international recognition. The desire to cut closer to social reality has inflected recent fictional films from China as well. Sharing a sense of social urgency, a new generation of filmmakers are straddling the blurred boundaries between documentary and narrative, and defining independent filmmaking in today’s China. Most of the films debuting here are bound by a concern for individuals whose physical and emotional lives have been trampled as the wheels of reform and modernization driving inexorably forward. Four of these films are set against the Three Gorges Dam construction, a monumental project that has come under scrutiny. Breaking ground in 1994, this world’s largest hydroelectric dam is due to start generating power in 2009. With its completion, massive flooding will have not only submerged the legendary Three Gorges and other cultural and historical sites along the Yangtze River, it will also have uprooted more than a million people and wiped out land they have called home for centuries. Proponents of the project bill it as one bold stroke that will finally tame a river of uncontrollable currents; critics see it as an enormous environmental and humanitarian disaster. Among the films that address the human costs of the project, Getting Home (Zhang Yang, 2007) approaches the politically sensitive issue with subtlety and tenderness. Playing on the age-old Chinese belief that a fallen leaf ought to return to its roots, the film unfolds with a migrant worker trying to transport his deceased drinking buddy’s body back to his distant hometown. Bizarre and humorous incidents happen en route, provoking laughter tinged with sadness. The ending promises a twist that situates a small road film within a grand narrative, one that speaks about the vicissitudes of floating urban subjects, home and lost land, the penchant for reform and its toll on individual lives, and a civilization left in ruins. The theme of social engagement continues in a more forthright tone in Bing’ai (Feng Yan,