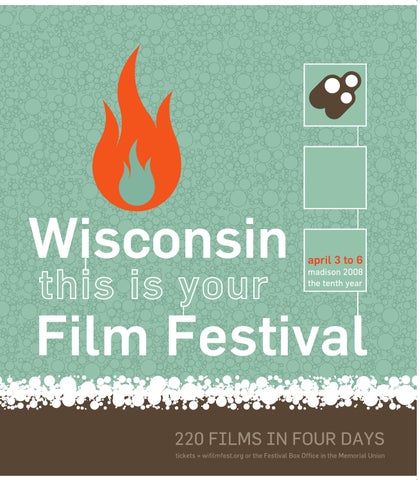 Case IH Agriculture is Proud to Support “Wisconsin’s Own” Films

With our own deep roots in Wisconsin, we congratulate the Wisconsin Film Festival’s commitment to local ﬁlmmakers, and look forward to the thriving future of our state’s ﬁlm industry in partnership with Film Wisconsin.

Case IH, headquartered in Racine, Wisconsin, is a global leader in agricultural equipment, committed to collaborating with its customers to develop the most powerful, productive, reliable equipment – for those who demand more.

c re a sony

WELCOME TO YOUR 2008 WISCONSIN FILM FESTIVAL!

Led by UW-Madison students Jim Kreul and Wendi Weger in year one, then by Mary Carbine as the director of the festival from 2000 to 2005, the goal of the festival programmers has been to challenge, educate, and open your eyes to the extraordinary variety of talented filmmakers around the world. Think of the thousands of people who have made those 1,356 films, from solo projects made here in Wisconsin to epic productions with enormous crews. And nearly all of these films are outside the commercial theater system, being seen in Madison because one of us picked them just for this audience. If you’ve attended the Festival, your unique combination of selections has created your own personal version of the Wisconsin Film Festival. If this is your first time, be adventurous. Read about the 220 films in this year's program and pick at least one, maybe two films that are very different than what you would normally choose.

Create your own Wisconsin Film Festival.

Most festival films are not rated. MPAA ratings provided where available. Viewer and parental discretion is advised. Festival programs and schedule are subject to change.

THE FINE PRINT This is your film festival. Please help it run smoothly!

TICKET POLICIES (see Tickets, page 36, for more details) All advance ticket sales are final. No refunds for tickets or packages. No replacements for lost tickets.

Theater Box Office Annex through April 2, or at the individual theater box offices during the festival dates: April 3 to 6.

THEATER POLICIES Please plan to arrive at least 15 minutes before the start of a show to guarantee admittance. At curtain time, any available seats may be filled by people waiting for rush tickets. Latecomers with tickets are not guaranteed admittance.

Theaters will be cleared between shows. All patrons must please exit theaters between shows to allow for setup for next program. No exceptions. No cameras or recording devices are permitted except for credentialed media. No filming or taping allowed during screenings. Tapes or film are subject to confiscation. Festival patron bags and belongings are subject to search. No outside food, beverages, or restaurant

takeout containers are permitted in the theaters. No food or drink of any kind is allowed in the Chazen Museum of Art; the UW Cinematheque allows bottled water but nothing else. Please turn off ringers on all cell phones, pagers, watches, etc., during screenings. Any patron who fails to follow these policies, causes a disturbance, or obstructs others’ view may be asked to cease, move to another seat, or leave.

ABOUT US Founded in 1999, the Wisconsin Film Festival is the stateâ&#x20AC;&#x2122;s premier film festival, in the heart of Madison, our capital city. This four-day annual festival takes place each spring in ten campus and downtown Madison theaters. The Festival presents the best new independent film (feature, documentary, experimental), world cinema, restored classics, and showcases the work of Wisconsin filmmakers through juried competitions.