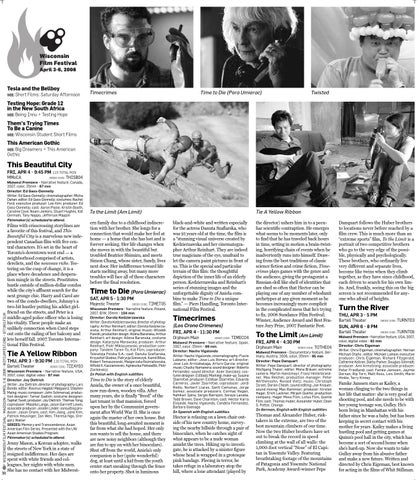 Films with crisscrossing storylines are a favorite of this festival, and This Beautiful City is a marvelous new independent Canadian film with five central characters. It’s set in the heart of Toronto’s downtown west end — a neighborhood comprised of artists, derelicts, and the nouveau riche. Teetering on the cusp of change, it is a place where decadence and desperation mingle in the streets. Prostitutes hustle outside of million-dollar condos while the city’s affluent search for the next grunge chic. Harry and Carol are two of the condo-dwellers, Johnny’s a two-bit hustler putting his addict girlfriend on the streets, and Peter is a middle-aged police officer who is losing his vitality. These people make an unlikely connection when Carol steps out onto the railing of her balcony and lets herself fall. 2007 Toronto International Film Festival.

Jenny Mason, a Korean adoptee, walks the streets of New York in a state of resigned indifference. Her days are spent with white friends and colleagues, her nights with white men. She has no contact with her Midwest-

To the Limit (Am Limit)

ern family due to a childhood indiscretion with her brother. She longs for a connection that would make her feel at home — a home that she has lost and is forever seeking. Her life changes when she moves in with the beautiful but troubled Beatrice Shimizu, and meets Simon Chang, whose sister, Sandy, lives next door. Her indifference toward life starts melting away, but many more troubles will face all of these characters before the final resolution.

Time to Die is the story of elderly Aniela, the owner of a once beautiful, now run-down, wooden villa. After many years, she is finally “freed” of the last tenant in that mansion, forced upon her by the Communist government after World War II. She is once again the master of her own house. But this beautiful, long-awaited moment is far from what she had hoped. Her only son wants to sell the house, and there are now noisy neighbors (although they are fun to spy on with her binoculars). Shut off from the world, Aniela’s only companion is her (quite wonderful) dog, at least until a kid from the youth center start sneaking through the fence onto her property. Shot in luminous

black-and-white and written especially for the actress Danuta Szaflarska, who was 91 years old at the time, the film is a “stunning visual universe created by Kedzierzawska and her cinematographer Arthur Reinhart. They are indeed true magicians of the eye, unafraid to let the camera paint pictures in front of us. This is the special and particular terrain of this film: the thoughtful depiction of the inner life of an elderly person. Kedzierzawska and Reinhart’s series of stunning images and the unforgettable dignity of Aniela combine to make Time to Die a unique film.” — Piers Handling, Toronto International Film Festival.

Hector is relaxing on a lawn chair outside of his new country home, surveying the nearby hillside through a pair of binoculars, when he catches sight of what appears to be a nude woman amidst the trees. Hiking up to investigate, he is attacked by a sinister figure whose head is wrapped in a grotesque pink bandage. Fleeing in terror, he takes refuge in a laboratory atop the hill, where a lone attendant (played by

the director) ushers him in to a peculiar scientific contraption. He emerges what seems to be moments later, only to find that he has traveled back hours in time, setting in motion a brain-twisting, horrifying chain of events when he inadvertently runs into himself. Drawing from the best traditions of classic science fiction and crime fiction, Timecrimes plays games with the genre and the audience, giving the protagonist a Russian-doll like shell of identities that are shed so often that Hector can be playing one of any number of whodunit archetypes at any given moment as he becomes increasingly more complicit in the complicated mess that he’s trying to fix. 2008 Sundance Film Festival; Winner, Audience Award and Best Feature Jury Prize, 2007 Fantastic Fest.

Thomas and Alexander Huber, risktakers in the extreme, are two of the best mountain climbers of our time. Now the two Huber brothers have set out to break the record in speed climbing at the wall of all walls: the 1,000-foot vertical “Nose” of El Capitan in Yosemite Valley. Featuring breathtaking footage of the mountains of Patagonia and Yosemite National Park, Academy Award-winner Pepe

Danquart follows the Huber brothers to locations never before reached by a film crew. This is much more than an “extreme sports” film, To the Limit is a portrait of two competitive brothers who go to the very edge of the possible, physically and psychologically. These brothers, who ordinarily live very different and separate lives, become like twins when they climb together, as they have since childhood, each driven to search for his own limits. And, frankly, seeing this on the big screen is not recommended for anyone who afraid of heights.

Famke Janssen stars as Kailey, a woman clinging to the two things in her life that matter: she is very good at shooting pool, and she needs to be with her young teenage son, Gulley. He’s been living in Manhattan with his father since he was a baby, but has been keeping in secret contact with his mother for years. Kailey makes a living hustling pool and getting games at Quinn’s pool hall in the city, which has become a sort of second home when she’s hard-up. Now she wants to take Gulley away from his abusive father and make a new future. Written and directed by Chris Eigeman, best known for acting in the films of Whit Stillman.