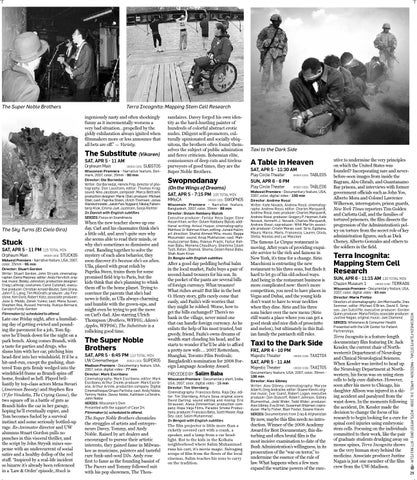 Terra Incognita: Mapping Stem Cell Research ingeniously nasty and often shockingly funny as it incrementally worsens a very bad situation…propelled by the giddy exhilaration always ignited when filmmakers more or less announce that all bets are off.” — Variety.

Late one Friday night, after a humiliating day of getting evicted and pounding the pavement for a job, Tom figures he’ll bunk down for the night on a park bench. Along comes Brandi, with a taste for parties and drugs, who slams him with her car, pitching him head-first into her windshield. It’d be a hit-and-run, except the gushing, shattered Tom gets firmly wedged into the windshield frame as Brandi spins off home, freaked as hell. Played brilliantly by top-class actors Mena Suvari (American Beauty) and Stephen Rea (V for Vendetta, The Crying Game), the two square off in a battle of guts as Brandi hides the car in her garage, hoping he’ll eventually expire, and Tom becomes fueled by a survival instinct and some seriously bottled-up rage. Re-Animator director and UW alumnus Stuart Gordon pulls no punches in this visceral thriller, and the script by John Strysik mixes suspense with an undercurrent of social satire and a healthy dollop of the red stuff. “Inspired by a real-life incident so bizarre it’s already been referenced in a ‘Law & Order’ episode, Stuck is

The Super Noble Brothers chronicles the struggles of artists and entrepreneurs Davey, Tommy, and Andy Noble. Raised by art dealers and encouraged to pursue their artistic interests, they gained fame in Milwaukee as musicians, painters and tasteful rare funk-and-soul DJs. Andy rose first to fame as the founding bassist of The Pacers and Tommy followed suit with his pop showmen, The Thou-

Taxi to the Dark Side

(On the Wings of Dreams)

The film projector is little more than a ricketly covered cart with a crank, a speaker, and a lamp from a car headlight. But to the kids in the Kolkata neighborhood where Salim Muhammad runs his cart, it’s movie magic. Salvaging scraps of film from the floors of the local cinemas, Salim teaches his sons to carry on the tradition.

The famous Le Cirque restaurant is moving. After years of providing exquisite service to the rich and famous in New York, it’s time for a change. Sirio Macchioni is entrusting the new restaurant to his three sons, but finds it hard to let go of his old-school ways. And being in the restaurant business is more complicated now: there’s more competition, you need to have places in Vegas and Dubai, and the young kids don’t want to have to wear neckties when they dine. Sirio and his three sons bicker over the new menu (Sirio still wants a place where you can get a good steak and nice dish of prosciutto and melon), but ultimately in this Italian family the patriarch still rules.

Taxi to the Dark Side FRI, APR 4 • 10 PM Majestic Theater

By now, maybe this film needs no introduction. Winner of the 2008 Academy Award for Best Documentary, this disturbing and often brutal film is the most incisive examination to date of the Bush Administration’s willingness, in its prosecution of the “war on terror,” to undermine the essence of the rule of law. What happens when a few men expand the wartime powers of the exec-

utive to undermine the very principles on which the United States was founded? Incorporating rare and neverbefore-seen images from inside the Bagram, Abu Ghraib, and Guantanamo Bay prisons, and interviews with former government officials such as John Yoo, Alberto Mora and Colonel Lawrence Wilkerson, interrogators, prison guards, New York Times reporters Tim Golden and Carlotta Gall, and the families of tortured prisoners, the film dissects the progression of the Administration’s policy on torture from the secret role of key administration figures, such as Dick Cheney, Alberto Gonzales and others to the soldiers in the field.

Terra Incognita is a feature-length documentary film featuring Dr. Jack Kessler, the current chair of Northwestern’s Department of Neurology and Clinical Neurological Sciences. When Kessler was invited to head up the Neurology Department at Northwestern, his focus was on using stem cells to help cure diabetes. However, soon after his move to Chicago, his daughter Allison was injured in a skiing accident and paralyzed from the waist down. In the moments following the accident, Dr. Kessler made the decision to change the focus of his research to begin looking for a cure for spinal cord injuries using embryonic stem cells. Focusing on the individuals committed to their work, like the pair of graduate students drudging away on mouse spines, Terra Incognita shows us the very human story behind the medicine. Associate producer Justine Nagan is just one member of the film crew from the UW-Madison.

When the new teacher shows up one day, Carl and his classmates think she’s a little odd, and aren’t quite sure why she seems able to read their minds, or why she’s sometimes so dismissive and cruel. Banding together to solve the mystery of such alien behavior, they soon discover it’s because she’s an alien. Ulla, played with great relish by Paprika Steen, trains them for some promised field trip to Paris, but the kids think that she’s planning to whisk them off to the home planet. Trying to convince the parents that she’s bad news is futile, as Ulla always charming and humble with the grown-ups, and might even be trying to put the move on Carl’s dad. Also starring Ulrich Thompson (Brothers, WFF05; Adam’s Apples, WFF06), The Substitute is a rollicking good time.