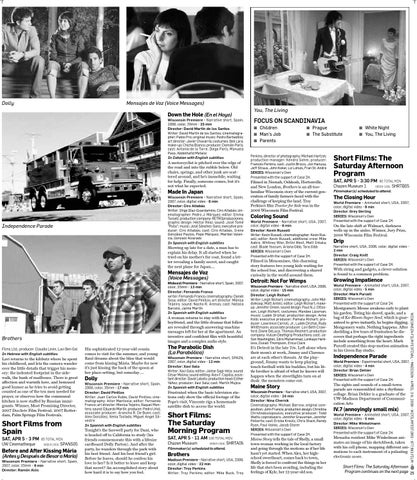 A motorcyclist is pitched over the edge of the road and into the rubble below. Old chairs, springs, and other junk are scattered around, and he’s immobile, waiting for help. Finally, someone comes, but it’s not what he expected.

Showing up late for a date, a man has to explain his delay. It all started when he tried on his mother’s fur coat, found a letter revealing a family secret, and caught the next plane for Japan....

A woman returns to stay with her boyfriend, and the little dramas that follow are revealed through answering-machine messages left for her at the apartment. An inventive and confident film with beautiful images and a complex audio style.

Lavi returns to the kibbutz where he spent his childhood, and lets the camera wander over the little details that trigger his memory: the indented footprint in the sidewalk, the bank of mailboxes. There is great affection and warmth here, and bemused good humor as he tries to avoid getting counted as one of the ten men needed for prayer, or observes how the communal kitchen is now staffed by Russian immigrants. Winner, Most Promising Director, 2007 DocAviv Film Festival; 2007 Rotterdam, Palm Springs Film Festivals.

His sophisticated 12-year-old cousin comes to visit for the summer, and young Raul dreams about the bliss that would come from kissing Mária. Maybe for now it’s just kissing the back of the spoon at her place-setting, but someday….

Tonight’s the farewell party for Dani, who is headed off to California to study (his friends commemorate this with a lifesize cardboard Dolly Parton). And after the party, he wanders through the park with his best friend. And his best friend’s girl. Before he leaves, should he confess his love to her? Is it better to leave and keep that secret? An accomplished story about how hard it is to say how you feel.

Frustrated when the basic television stations only show the official footage of the Pope’s visit, Vincente rigs a homemade satellite dish to access the world.

Filmed in Neenah, Oshkosh, Hortonville, and New London, Brothers is an all-toofamiliar Wisconsin story of the current generation of family farmers faced with the challenge of keeping the land. Troy Perkins’s film Tractor for Sale was in the 2006 Wisconsin Film Festival.

Filmed in Menominee, this charming story features two young kids waiting for the school bus, and discovering a shared curiosity in the world around them.

On the late shift at Walmart, darkness wells up in the aisles. Winner, Jury Prize, 2008 Wisconsin Film Festival.

With string and gadgets, a clever solution is found to a common problem.

Detroit: Not For Wimps

It’s Detroit in the late 70s. Left alone when their mom’s at work, Jimmy and Clarence are at each other’s throats. At the playground, Jimmy wants to keep playing touch football with his buddies, but his little brother is afraid of what he knows will happen when the streetlights turn on at dusk: the monsters come out.

Maine Story tells the tale of Shelly, a small town woman working in the local factory and going through the motions as if her life hasn’t yet started. When Alex, her highschool sweetheart, comes back to town, Shelly is forced to confront the things in her life that she’s been avoiding, including the feelings of Kyle, her 12-year-old son.

Montgomery Mouse awakens early to plant his garden. Toting his shovel, spade, and a bag of Ka-Bloom Super Seed, which is guaranteed to grwo instantly, he begins digging. Mongomery waits. Nothing happens. After shedding a few tears of frustration he discovers that perhaps the right ingredients include something from the heart. Mark Purcell created this stop-motion animation in his Green Bay studio.

The sights and sounds of a small-town parade are reassembled into a rhythmic collage. Brian Dehler is a graduate of the UW-Madison Department of Communication Arts

Menasha resident Mike Winkelman animates an image of his sketchbook, taken with his cell phone, mapping different animations to each instrument of a pulsating electronic score.

Short Films: The Saturday Afternoon Program continues on the next page 25