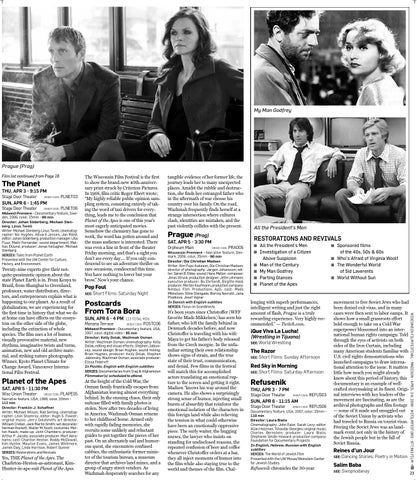 At the height of the Cold War, the Osman family frantically escapes from Afghanistan leaving almost everything behind. In the ensuing chaos, their only suitcase filled with family photos is stolen. Now after two decades of living in America, Wazhmah Osman returns to her childhood home. Armed only with rapidly fading memories, she recruits some unlikely and reluctant guides to put together the pieces of her past. On an alternately sad and humorous quest, she encounters confused cabbies, the enthusiastic former minister of the tourism bureau, a museum director that archives land mines, and a group of angry street vendors. As Wazhmah desperately searches for any

tangible evidence of her former life, the journey leads her to many unexpected places. Amidst the rubble and destruction, she finds her estranged father who in the aftermath of war choose his country over his family. On the road, Wazhmah frequently finds herself at a strange intersection where cultures clash, identities are mistaken, and the past violently collides with the present.

All the President’s Men

It’s been years since Christoffer (WFF favorite Mads Mikkelsen) has seen his father, who left the family behind in Denmark decades before, and now Christoffer is traveling with his wife Maya to get his father’s body released from the Czech morgue. In the unfamiliar setting their own relationship shows signs of strain, and the true state of their trust, communication, and denial. Few films in the festival will match this for accomplished actors translating an emotional rupture to the screen and getting it right. Madsen “knows his way around the camera. He also shows a surprisingly strong sense of humor, injecting small bursts of absurdity that reinforce the emotional isolation of the characters in this foreign land while also relieving the tension in what could otherwise have been an emotionally oppressive piece. The surly waiter, the hugging nurses, the lawyer who insists on standing for undisclosed reasons, the repeated confusion of beer and coffee whenever Christoffer orders at a bar, they all inject moments of humor into the film while also staying true to the world and themes of the film. Chal-

■ All the President’s Men

of Sid Laverents ■ World Without Sun

movement to free Soviet Jews who had been denied exit visas, and in many cases were then sent to labor camps. It shows how a small grassroots effort bold enough to take on a Cold War superpower blossomed into an international human rights campaign. Told through the eyes of activists on both sides of the Iron Curtain, including many American students familiar with U.S. civil rights demonstrations who launched campaigns to draw international attention to the issue. It matters little how much you might already know about this period of history, this documentary is an example of wellcrafted storymaking at its finest. Original interviews with key leaders of the movement are fascinating, as are the archival photographs and film footage — some of it made and smuggled out of the Soviet Union by activists who had traveled to Russia on tourist visas. Freeing the Soviet Jews was an landmark event not only in the history of the Jewish people but in the fall of Soviet Russia.

Twenty-nine experts give their notquite-pessimistic opinion about the state Planet Earth is in. From Kenya to Brazil, from Shanghai to Greenland, professors, water distributors, directors, and entrepreneurs explain what is happening to our planet. As a result of globalization, we are experiencing for the first time in history that what we do at home can have effects on the ecosystem on the other side of the globe, including the extinction of whole species. The film uses a lot of humor, visually provocative material, new rhythms, imaginative twists and turns, animation, new and old archive material, and striking nature photography. Winner, Kyoto Planet Climate for Change Award, Vancouver International Film Festival.

The Wisconsin Film Festival is the first to show the brand-new 40th-anniversary print struck by Criterion Pictures. In 1968, film critic Roger Ebert wrote: “My highly reliable public opinion sampling system, consisting entirely of taking the word of taxi drivers for everything, leads me to the conclusion that Planet of the Apes is one of this year’s most eagerly anticipated movies. Somehow the chemistry has gone to work, the word has gotten around and the mass audience is interested. There was even a line in front of the theater Friday morning, and that’s a sight you don’t see every day…. If you only condescend to see an adventure thriller on rare occasions, condescend this time. You have nothing to lower but your brow.” Now’s your chance.