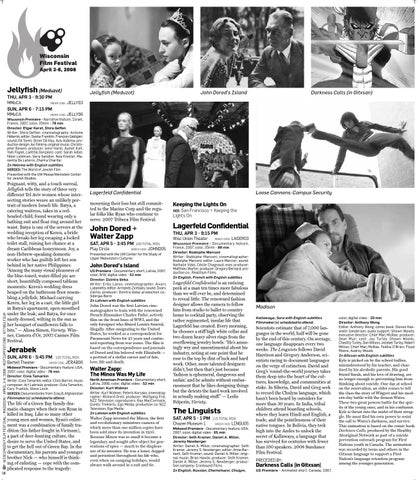 Poignant, witty, and a touch surreal, Jellyfish tells the story of three very different Tel Aviv women whose intersecting stories weave an unlikely portrait of modern Israeli life. Batya, a catering waitress, takes in a redheaded child, found wearing only a bathing suit and float ring around her waist. Batya is one of the servers at the wedding reception of Keren, a bride who breaks her leg escaping a locked toilet stall, ruining her chance at a dream Caribbean honeymoon. Joy, a non-Hebrew-speaking domestic worker who has guiltily left her son behind in her native Philippines. “Among the many visual pleasures of the blue-toned, water-filled pic are short, beautifully composed tableau moments: Keren’s wedding dress heaped on the bathroom floor resembling a jellyfish; Michael carrying Keren, her leg in a cast; the little girl in Batya’s apartment, open-mouthed under the leak; and Batya, for once nicely dressed, wilting in the sun as her bouquet of sunflowers falls to bits.” — Alissa Simon, Variety. Winner, Camera d’Or, 2007 Cannes Film Festival.

The life of a Green Bay family dramatic changes when their son Ryan in killed in Iraq. Like so many other young men and women, Ryan’s enlistment was a combination of family tradition (his father fought in Vietnam), a part of deer-hunting culture, the desire to serve the United States, and to get the hell out of Green Bay. In the documentary, his parents and younger brother Nick — who himself is thinking of enlisting — cope with the complicated response to the tragedy:

Lagerfeld Confidential mourning their loss but still committed to the Marine Corp and the regular folks like Ryan who continue to serve. 2007 Tribeca Film Festival.

John Dored was the first Latvian cinematographer to train with the renowned French filmmaker Charles Pathé, actively film on the front lines of WWI, and the only foreigner who filmed Lenin’s funeral, illegally. After emigrating to the United States, he worked as a correspondent for Paramount News for 25 years and continued reporting from war zones. The film is based on the correspondence and journals of Dored and his beloved wife Elizabeth — a portrait of a stellar career and of fate, love, life and death.

Walter Zapp invented the Minox, the first and revolutionary miniature camera of which more than one million copies have been sold since its invention in 1935. Because Minox was so small it became a legendary and sought after object for generations of spies — much to the displeasure of its inventor. He was a loner, dogged and persistent throughout his life who, even when on camping holidays, would always walk around in a suit and tie.

Lagerfeld Confidential is an enticing peek at a man ten times more fabulous than we will ever be, and determined to reveal little. The renowned fashion designer allows the camera to follow him from studio to ballet to country home to cocktail party, observing the rather regimented, insular life that Lagerfeld has created. Every morning, he chooses a stiff high white collar and two dozen heavy silver rings from the overflowing jewelry bowls. “He’s amusingly wry and unsentimental about his industry, noting at one point that he rose to the top by dint of luck and hard work. Other, more talented designers didn’t, but then that’s just because ‘fashion is ephemeral, dangerous and unfair,’ and he admits without embarrassment that he likes designing things but the detests the hard work involved in actually making stuff.” — Leslie Felperin, Variety.

Scientists estimate that of 7,000 languages in the world, half will be gone by the end of this century. On average, one language disappears every two weeks. The Linguists follows David Harrison and Gregory Anderson, scientists racing to document languages on the verge of extinction. David and Greg’s ’round-the-world journey takes them deep into the heart of the cultures, knowledge, and communities at stake. In Siberia, David and Greg seek to record the Chulym language, which hasn’t been heard by outsiders for more than 30 years. In India, tribal children attend boarding schools, where they learn Hindi and English, a trade, and the pointlessness of their native tongues. In Bolivia, they trek high into the Andes to unlock the secret of Kallawaya, a language that has survived for centuries with fewer than 100 speakers. 2008 Sundance Film Festival. PRECEDED BY:

Kyle is picked on by the school bullies, misunderstood by his teacher, and chastised by his alcoholic parents. His good friend Sarah, and his love of drawing, are no longer enough to preventing him from thinking about suicide. One day at school on the reservation, an elder comes to tell the class the story of Wiigyet and his modern-day battle with the demon Watsx. These two great powers battle for the spirits of the young ones, and in his confusion Kyle is thrust into the midst of their struggle. He must find his own power to resist the call to Watsx’s darkness, and survive. This animation is based on the comic book Darkness Calls, produced by the Healthy Aboriginal Network as part of a suicide prevention outreach program for First Nations youth in Canada. The animation was recorded by teens and others in the Gitxsan language to support a First Nation’s language retention program among the younger generation.