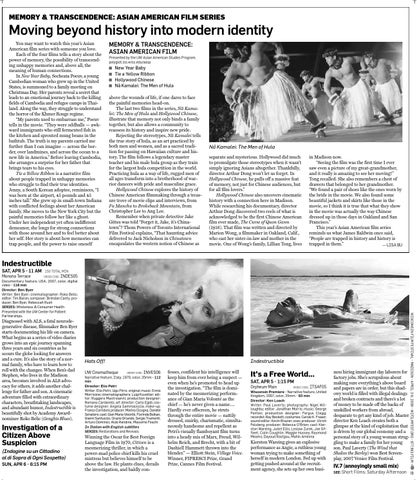 Moving beyond history into modern identity You may want to watch this year’s Asian American film series with someone you love. Each of the four films tells a story about the power of memory, the possibility of transcending unhappy memories and, above all, the meaning of human connections. In New Year Baby, Socheata Poeuv, a young Cambodian woman who grew up in the United States, is summoned to a family meeting on Christmas Day. Her parents reveal a secret that leads to an emotional journey back to the killing fields of Cambodia and refugee camps in Thailand. Along the way, they struggle to understand the horror of the Khmer Rouge regime. “My parents used to embarrass me,” Poeuv tells in the movie. “They were oddballs — awkward immigrants who still fermented fish in the kitchen and sprouted mung beans in the bathtub. The truth is my parents carried me further than I can imagine — across the border, over landmines, and across the ocean to a new life in America.” Before leaving Cambodia, she arranges a surprise for her father that brings tears to his eyes. Tie a Yellow Ribbon is a narrative film about people trapped in unhappy memories who struggle to find their true identities. Jenny, a South Korean adoptee, reminisces, “I was born at the airport, 45 pounds and 45 inches tall.” She grew up in small-town Indiana with conflicted feelings about her American family. She moves to the New York City but the painful memories follow her like a ghost. Under her independent yet often indifferent demeanor, she longs for strong connections with those around her and to feel better about her self. Her story is about how memories can trap people, and the power to raise oneself

above the wounds of life, if one dares to face the painful memories head-on. The last two films in the series, Na¯ Kamalei: The Men of Hula and Hollywood Chinese, illustrate that memory not only binds a family together, but also allows a community to reassess its history and inspire new pride. Rejecting the stereotypes, Na¯ Kamalei tells the true story of hula, as an art practiced by both men and women, and as a sacred tradition for passing on Hawaiian culture and history. The film follows a legendary master teacher and his male hula group as they train for the largest hula competition in the world. Practicing hula as a way of life, rugged men of all ages transform into a brotherhood of warrior dancers with pride and masculine grace. Hollywood Chinese explores the history of Chinese American filmmaking through a treasure trove of movie clips and interviews, from Fu Manchu to Brokeback Mountain, from Christopher Lee to Ang Lee. Remember when private detective Jake Gittes was told “Forget it, Jake, it’s Chinatown”? Thom Powers of Toronto International Film Festival explains, “That haunting advice delivered to Jack Nicholson in Chinatown encapsulates the western notion of Chinese as

Na¯ Kamalei: The Men of Hula separate and mysterious. Hollywood did much to promulgate those stereotypes when it wasn’t simply ignoring Asians altogether. Thankfully, director Arthur Dong won’t let us forget. In Hollywood Chinese, he pulls off a massive feat of memory, not just for Chinese audiences, but for all film lovers.” Hollywood Chinese also uncovers cinematic history with a connection here in Madison. While researching his documentary, director Arthur Dong discovered two reels of what is acknowledged to be the first Chinese American film ever made, The Curse of Quon Gwon (1916). That film was written and directed by Marion Wong, a filmmaker in Oakland, Calif., who cast her sister-in-law and mother in the movie. One of Wong’s family, Lillian Tong, lives

in Madison now. “Seeing the film was the first time I ever saw even a picture of my great-grandmother, and it really is amazing to see her moving!” Tong recalled. She also remembers a chest of drawers that belonged to her grandmother. “We found a pair of shoes like the ones worn by the bride in the movie. We also found some beautiful jackets and skirts like those in the movie, so I think it is true that what they show in the movie was actually the way Chinese dressed up in those days in Oakland and San Francisco.” This year’s Asian American film series reminds us what James Baldwin once said, “People are trapped in history and history is trapped in them.” — LISA BU

Diagnosed with ALS, a fatal neurodegenerative disease, filmmaker Ben Byer starts documenting his life on camera. What begins as a series of video diaries grows into an epic journey spanning three years and six countries as he scours the globe looking for answers and a cure. It’s also the story of a normal family, who have to learn how to roll with the changes. When Ben’s dad Stephen, who lives in the Madison area, becomes involved in ALS advocacy for others, it adds another challenge for father and son. A cinematic adventure filled with extraordinary characters, breathtaking landscapes, and abundant humor, Indestructible is beautifully shot by Academy Awardnominee Roko Belic (Genghis Blues).

Winning the Oscar for Best Foreign Language Film in 1970, Citizen is a mesmerizing thriller, in which a power-mad police chief kills his cruel mistress but believes himself to be above the law. He plants clues, derails the investigation, and baldly con-

Indestructible fesses, confident his intelligence will keep him from ever being a suspect — even when he’s promoted to head up the investigation. “The film is dominated by the mesmerizing performance of Gian Maria Volonté as the chief — he’s never given a name…. Hardly ever offscreen, he struts through the entire movie — nattily dressed, smirky, charismatic, simultaneously handsome and repellent as Petri’s visually flamboyant film turns into a heady mix of Marx, Freud, Wilhelm Reich, and Brecht, with a bit of Dashiell Hammett thrown into the blender.” — Elliott Stein, Village Voice. Winner, FIPRESCI Prize, Grand Prize, Cannes Film Festival.

Kierston Wareing gives an explosive performance as Angie, a ruthless young woman trying to make something of herself in modern London. Fed up with getting pushed around at the recruitment agency, she sets up her own busi-

ness hiring immigrant day laborers for factory jobs. She’s scrupulous about making sure everything’s above board and papers are in order, but this shadowy world is filled with illegal dealings and broken contracts and there’s a lot of money to be made off the backs of unskilled workers from abroad, desparate to get any kind of job. Master director Ken Loach creates both a glimpse at the kind of exploitation that is driven by our global economy and a personal story of a young woman struggling to make a family for her young son. Paul Laverty (The Wind that Shakes the Barley) won Best Screenplay, 2007 Venice Film Festival.