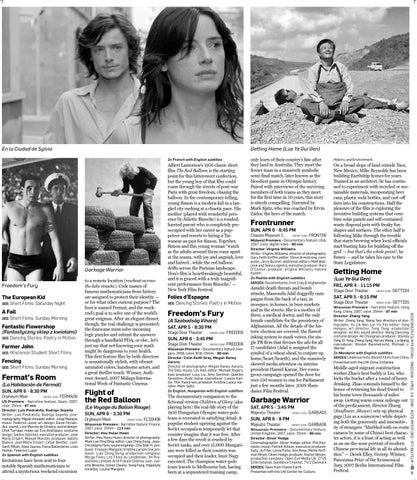 The documentary companion to the fictional version Children of Glory (also playing here) the real-life story of the 1956 Hungarian Olympic water-polo team is recreated in satisfying detail. A popular student uprising against the Soviet occupation temporarily let that country imagine that it was free. After a few days the revolt is crushed by Soviet tanks, and over 15,000 Hungarians were killed as their country was occupied and their leader, Imre Nagy executed. The champion water-polo team travels to Melbourne but, having been at a sequestered training camp,

only learn of their country’s fate after they land in Australia. They meet the Soviet team in a massively symbolic semi-final match, later known as the bloodiest game in Olympic history. Paired with interviews of the surviving members of both teams as they meet for the first time in 50 years, this story is utterly compelling. Narrated by Mark Spitz, who was coached by Ervin Zádor, the hero of the match.

Amidst death threats and bomb attacks, Massouda Jalal doggedly campaigns from the back of a taxi, in mosques, in homes, in busy markets and in the streets. She is a mother of three, a medical doctor, and the only female candidate for the presidency of Afghanistan. All the details of the historic election are covered: the flawed inking system to mark voters, the single PR firm that devises the ads for all 17 candidates (Jalal is assigned the symbol of a wheat sheaf, to conjure up home/heart/hearth), and the massively skewed media attention on interim president Hamid Karzai. Her courageous campaign opened the door for over 550 women to run for Parliament just a few months later. 2008 Slamdance Film Festival.

On a broad slope of land outside Taos, New Mexico, Mike Reynolds has been building Earthship homes for years. Trained as an architect, he has continued to experiment with recycled or sustainable materials, incoporating beer cans, plastic soda bottles, and cast-off tires into his constructions. Half the pleasure of the film is exploring the inventive building systems that combine solar panels and self-contained waste disposal pots with freaky fun shapes and surfaces. The other half is following Mike through the trouble that starts brewing when local officials start busting him for building off the grid — but that’s the whole point!, he fumes — and he takes his case to the State Legislature.

Middle-aged migrant construction worker Zhao’s best buddy is Liu, who kicks the bucket after a round of heavy drinking. Zhao commits himself to the honor of returning his dead friend to his home town thousands of miles away. Getting warm comic mileage out of the predicament, director Zhang (Sunflower, Shower) sets up physical gags (Liu as a scarecrow) while depicting both the generosity and insensitivity of strangers. “Marbled with en-route cameos by some of China’s best character actors, it is a feast of acting as well as an on-the-nose portrait of modern Chinese provincial life in all its absurdities.” — Derek Elley, Variety. Winner, Panorama Prize of the Ecumenical Jury, 2007 Berlin International Film Festival.

to a remote location (rowboat-acrossthe-lake remote). Code names of famous mathematicians from history are assigned to protect their identity — or for what other curious purpose? The host is named Fermat, and the weekend’s goal is to solve one of the world’s great enigmas. After an elegant dinner, though, the real challenge is presented: the foursome must solve incoming logic puzzles and submit the answers through a handheld PDA, or else...let’s just say that not knowing your math might be dangerous to your health. This first feature film by both directors is sensationally stylish, with vibrant saturated colors, handsome actors, and a great thriller touch. Winner, Audience Award, 2007 Málaga International Week of Fantastic Cinema.

Albert Lamorisse’s 1956 classic short film The Red Balloon is the starting point for this bittersweet confection, but the young boy of that film could roam through the streets of post-war Paris with great freedom, chasing the balloon. In the contemporary telling, young Simon is a modern kid in a tangled city rushing at a chaotic pace. His mother (played with wonderful presence by Juliette Binoche) is a tousled, harried parent who is completely preoccupied with her career as a puppeteer and resorts to hiring a Taiwanese au pair for Simon. Together, Simon and this young woman “watch as the adults around them come apart at the seams, with joy and anguish, love and hatred…while the red balloon drifts across the Parisian landscape. Hou’s film is heartbreakingly beautiful, and it is graced with a truly magnificent performance from Binoche.” — New York Film Festival.