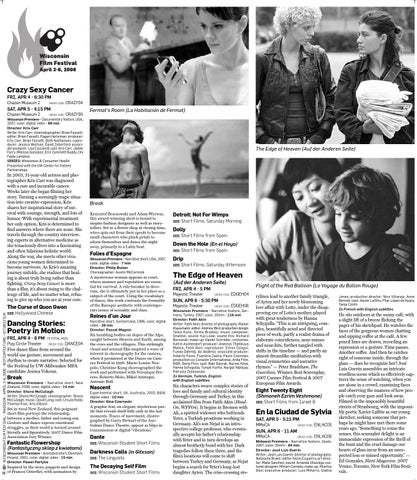 In 2003, 31-year-old actress and photographer Kris Carr was diagnosed with a rare and incurable cancer. Weeks later she began filming her story. Turning a seemingly tragic situation into creative expression, Kris shares her inspirational story of survival with courage, strength, and lots of humor. With experimental treatment her only option, Kris is determined to find answers where there are none. She travels through the country interviewing experts in alternative medicine as she tenaciously dives into a fascinating and often hilarious holistic world. Along the way, she meets other vivacious young women determined to become survivors. As Kris’s amazing journey unfolds, she realizes that healing is about truly living rather than fighting. Crazy Sexy Cancer is more than a film, it’s about rising to the challenge of life, and no matter what, refusing to give up who you are at your core. WISCONSIN FILM FESTIVAL • MADISON • APRIL 3-6, 2008 • WIFILMFEST.ORG • 877.963.FILM

Five dance films from around the world use gesture, movement and rhythm to create narrative. Selected for the Festival by UW-Milwaukee MFA candidate Jessica Vokoun.

Set in rural New Zealand, this poignant short film portrays the relationship between a mother, father and young son. Gesture and dance express emotional struggles, as their world is turned around literally and figuratively. 2007 Dance Film Association Jury Winner.

Inspired by the story, puppets and design 10 of Frances Osterflet, with animation by

Break Krzysztof Brzozowski and Adam Wyrwas, this award-winning short is bound to inspire fashion designers as well as storytellers. Set in a flower shop at closing time, wires spin out from their spools to become small characters who pluck petals to adorn themselves and dance the night away, primarily to a Latin beat.

A mysterious woman appears at court, where manner and reputation are essential for survival. A rule-breaker in decorum, she is ultimately put in her place as a subject of the court. Using the vocabulary of dance, this work contrasts the formality of the Baroque aesthetic with contemporary issues of sexuality and class.

Six tumbling bodies on slopes of the Alps, caught between Heaven and Earth, among the cows and the villagers. This strikingly visual and sensual film inspired a wave of interest in choreography for the camera, when it premiered at the Dance on Camera Festival in 1996. Marie-Louise Nespolo, Christine Kung choreographed the work and performed with Veronique Ferrero, Roberto Molo, Mikel Aristegui, Antonio Bull.

A graphic feat, an elegant, mysterious puzzle that reveals itself fully only in the last moments. Traces of movement, choreographed by Garry Stewart of the Australian Dance Theatre, appear as blips in transmission or digital “vibrations.”

Six characters weave complex stories of love and family and cultural identity through Germany and Turkey, in this acclaimed film from Fatih Akin (HeadOn, WFF04). It begins in Bremen with Ali, a spirited widower who befriends Yeter, a Turkish prostitute working in Germany. Ali’s son Nejat is an introspective college professor, who eventually accepts his father’s relationship with Yeter and in turn develops an almost brotherly bond with her. Dark tragedies follow these three, and the film’s locations will come to shift between Turkey and Germany, as Nejat begins a search for Yeter’s long-lost daughter Ayten. The criss-crossing sto-

rylines lead to another family triangle, of Ayten and her newly blossoming love affair with Lotte, under the disapproving eye of Lotte’s mother, played with great tenderness by Hanna Schygulla. “This is an intriguing, complex, beautifully acted and directed piece of work, partly a realist drama of elaborate coincidences, near-misses and near-hits, further tangled with shifts in the timeline — and partly an almost dreamlike meditation with visual symmetries and narrative rhymes.” — Peter Bradshaw, The Guardian. Winner, Best Screenplay, 2007 Cannes Film Festival & 2007 European Film Awards.

He sits outdoors at the sunny café, with a slight lift of a breeze flicking the pages of his sketchpad. He watches the faces of the gorgeous women chatting and sipping coffee at the café. A few pencil lines are drawn, recording an expression or a gesture. Time passes. Another coffee. And then he catches sight of someone inside, through the glass — does he recognize her? José Luis Guerín assembles an intricate wordless scene which so effectively captures the sense of watching, when you are alone in a crowd, examining faces and observing the nuances of how people catch your gaze and look away. Filmed in the impossibly beautiful streets of Strasbourg, with the impossibly poetic Xavier Lafitte as our young sketcher, seeking someone that perhaps he might have met there some years ago. “Something to rouse the senses, this sensualist delight is an immaculate expression of the thrill of the hunt and the cruel damage our hearts of glass incur from an unexpected loss or missed opportunity.” — Ed Gonzales, Slant Magazine. 2007 Venice, Toronto, New York Film Festivals.