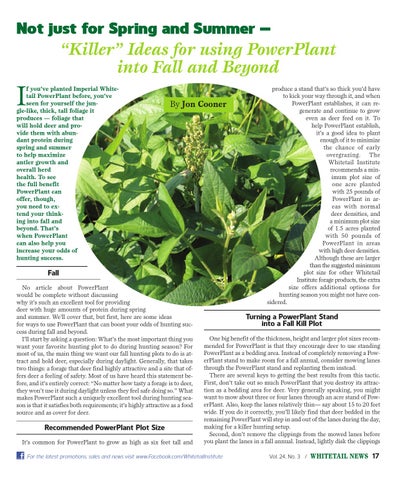 Not just for Spring and Summer —

“Killer” Ideas for using PowerPlant into Fall and Beyond

f you’ve planted Imperial Whitetail PowerPlant before, you’ve seen for yourself the jungle-like, thick, tall foliage it produces — foliage that will hold deer and provide them with abundant protein during spring and summer to help maximize antler growth and overall herd health. To see the full benefit PowerPlant can offer, though, you need to extend your thinking into fall and beyond. That’s when PowerPlant can also help you increase your odds of hunting success.

Fall No article about PowerPlant would be complete without discussing why it’s such an excellent tool for providing deer with huge amounts of protein during spring and summer. We’ll cover that, but first, here are some ideas for ways to use PowerPlant that can boost your odds of hunting success during fall and beyond. I’ll start by asking a question: What’s the most important thing you want your favorite hunting plot to do during hunting season? For most of us, the main thing we want our fall hunting plots to do is attract and hold deer, especially during daylight. Generally, that takes two things: a forage that deer find highly attractive and a site that offers deer a feeling of safety. Most of us have heard this statement before, and it’s entirely correct: “No matter how tasty a forage is to deer, they won’t use it during daylight unless they feel safe doing so.” What makes PowerPlant such a uniquely excellent tool during hunting season is that it satisfies both requirements; it’s highly attractive as a food source and as cover for deer.

produce a stand that’s so thick you’d have to kick your way through it, and when PowerPlant establishes, it can regenerate and continue to grow even as deer feed on it. To help PowerPlant establish, it’s a good idea to plant enough of it to minimize the chance of early overgrazing. The Whitetail Institute recommends a minimum plot size of one acre planted with 25 pounds of PowerPlant in areas with normal deer densities, and a minimum plot size of 1.5 acres planted with 50 pounds of PowerPlant in areas with high deer densities. Although these are larger than the suggested minimum plot size for other Whitetail Institute forage products, the extra size offers additional options for hunting season you might not have considered.

Turninga aPowerPlant PowerPlantStand Standinto a Fall Kill Turning into a Fall PlotKill Plot One big benefit of the thickness, height and larger plot sizes recommended for PowerPlant is that they encourage deer to use standing PowerPlant as a bedding area. Instead of completely removing a PowerPlant stand to make room for a fall annual, consider mowing lanes through the PowerPlant stand and replanting them instead. There are several keys to getting the best results from this tactic. First, don’t take out so much PowerPlant that you destroy its attraction as a bedding area for deer. Very generally speaking, you might want to mow about three or four lanes through an acre stand of PowerPlant. Also, keep the lanes relatively thin— say about 15 to 20 feet wide. If you do it correctly, you’ll likely find that deer bedded in the remaining PowerPlant will step in and out of the lanes during the day, making for a killer hunting setup. Second, don’t remove the clippings from the mowed lanes before you plant the lanes in a fall annual. Instead, lightly disk the clippings