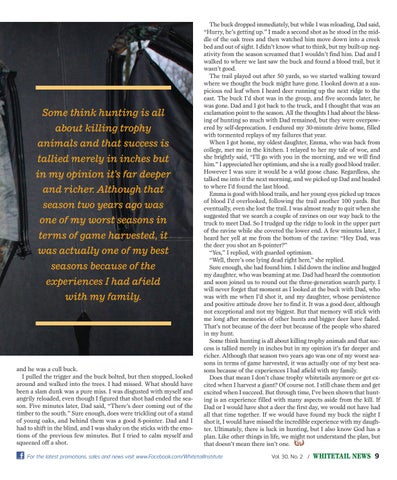 Some think hunting is all about killing trophy animals and that success is tallied merely in inches but in my opinion it’s far deeper and richer. Although that season two years ago was one of my worst seasons in terms of game harvested, it was actually one of my best seasons because of the experiences I had aﬁeld with my family.

and he was a cull buck. I pulled the trigger and the buck bolted, but then stopped, looked around and walked into the trees. I had missed. What should have been a slam dunk was a pure miss. I was disgusted with myself and angrily reloaded, even though I figured that shot had ended the season. Five minutes later, Dad said, “There’s deer coming out of the timber to the south.” Sure enough, does were trickling out of a stand of young oaks, and behind them was a good 8-pointer. Dad and I had to shift in the blind, and I was shaky on the sticks with the emotions of the previous few minutes. But I tried to calm myself and squeezed off a shot.

The buck dropped immediately, but while I was reloading, Dad said, “Hurry, he’s getting up.” I made a second shot as he stood in the middle of the oak trees and then watched him move down into a creek bed and out of sight. I didn’t know what to think, but my built-up negativity from the season screamed that I wouldn’t find him. Dad and I walked to where we last saw the buck and found a blood trail, but it wasn’t good. The trail played out after 50 yards, so we started walking toward where we thought the buck might have gone. I looked down at a suspicious red leaf when I heard deer running up the next ridge to the east. The buck I’d shot was in the group, and five seconds later, he was gone. Dad and I got back to the truck, and I thought that was an exclamation point to the season. All the thoughts I had about the blessing of hunting so much with Dad remained, but they were overpowered by self-deprecation. I endured my 30-minute drive home, filled with tormented replays of my failures that year. When I got home, my oldest daughter, Emma, who was back from college, met me in the kitchen. I relayed to her my tale of woe, and she brightly said, “I’ll go with you in the morning, and we will find him.” I appreciated her optimism, and she is a really good blood trailer. However I was sure it would be a wild goose chase. Regardless, she talked me into it the next morning, and we picked up Dad and headed to where I’d found the last blood. Emma is good with blood trails, and her young eyes picked up traces of blood I’d overlooked, following the trail another 100 yards. But eventually, even she lost the trail. I was almost ready to quit when she suggested that we search a couple of ravines on our way back to the truck to meet Dad. So I trudged up the ridge to look in the upper part of the ravine while she covered the lower end. A few minutes later, I heard her yell at me from the bottom of the ravine: “Hey Dad, was the deer you shot an 8-pointer?” “Yes,” I replied, with guarded optimism. “Well, there’s one lying dead right here,” she replied. Sure enough, she had found him. I slid down the incline and hugged my daughter, who was beaming at me. Dad had heard the commotion and soon joined us to round out the three-generation search party. I will never forget that moment as I looked at the buck with Dad, who was with me when I’d shot it, and my daughter, whose persistence and positive attitude drove her to find it. It was a good deer, although not exceptional and not my biggest. But that memory will stick with me long after memories of other hunts and bigger deer have faded. That’s not because of the deer but because of the people who shared in my hunt. Some think hunting is all about killing trophy animals and that success is tallied merely in inches but in my opinion it’s far deeper and richer. Although that season two years ago was one of my worst seasons in terms of game harvested, it was actually one of my best seasons because of the experiences I had afield with my family. Does that mean I don’t chase trophy whitetails anymore or get excited when I harvest a giant? Of course not. I still chase them and get excited when I succeed. But through time, I’ve been shown that hunting is an experience filled with many aspects aside from the kill. If Dad or I would have shot a deer the first day, we would not have had all that time together. If we would have found my buck the night I shot it, I would have missed the incredible experience with my daughter. Ultimately, there is luck in hunting, but I also know God has a plan. Like other things in life, we might not understand the plan, but that doesn’t mean there isn’t one. ^