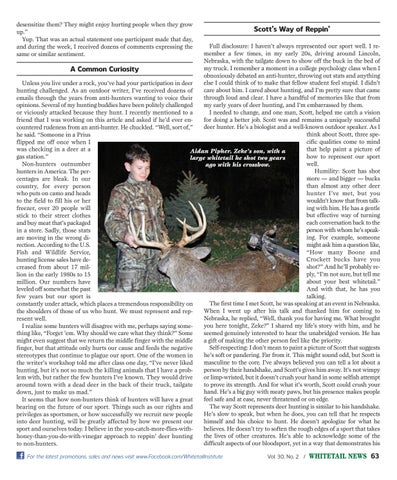 desensitize them? They might enjoy hurting people when they grow up.” Yup. That was an actual statement one participant made that day, and during the week, I received dozens of comments expressing the same or similar sentiment.

Full disclosure: I haven’t always represented our sport well. I remember a few times, in my early 20s, driving around Lincoln, Nebraska, with the tailgate down to show off the buck in the bed of my truck. I remember a moment in a college psychology class when I A Common Curiosity obnoxiously debated an anti-hunter, throwing out stats and anything else I could think of to make that fellow student feel stupid. I didn’t Unless you live under a rock, you’ve had your participation in deer care about him. I cared about hunting, and I’m pretty sure that came hunting challenged. As an outdoor writer, I’ve received dozens of through loud and clear. I have a handful of memories like that from emails through the years from anti-hunters wanting to voice their my early years of deer hunting, and I’m embarrassed by them. opinions. Several of my hunting buddies have been politely challenged I needed to change, and one man, Scott, helped me catch a vision or viciously attacked because they hunt. I recently mentioned to a for doing a better job. Scott was and remains a uniquely successful friend that I was working on this article and asked if he’d ever endeer hunter. He’s a biologist and a well-known outdoor speaker. As I countered rudeness from an anti-hunter. He chuckled. “Well, sort of,” think about Scott, three spehe said. “Someone in a Prius cific qualities come to mind flipped me off once when I that help paint a picture of was checking in a deer at a Aidan Pipher, Zeke’s son, with a how to represent our sport gas station.” large whitetail he shot two years well. Non-hunters outnumber ago with his crossbow. Humility: Scott has shot hunters in America. The permore — and bigger — bucks centages are bleak. In our than almost any other deer country, for every person hunter I’ve met, but you who puts on camo and heads wouldn’t know that from talkto the field to fill his or her ing with him. He has a gentle freezer, over 20 people will but effective way of turning stick to their street clothes each conversation back to the and buy meat that’s packaged person with whom he’s speakin a store. Sadly, those stats ing. For example, someone are moving in the wrong dimight ask him a question like, rection. According to the U.S. “How many Boone and Fish and Wildlife Service, Crockett bucks have you hunting license sales have deshot?” And he’ll probably recreased from about 17 milply, “I’m not sure, but tell me lion in the early 1980s to 15 about your best whitetail.” million. Our numbers have And with that, he has you leveled off somewhat the past talking. few years but our sport is The first time I met Scott, he was speaking at an event in Nebraska. constantly under attack, which places a tremendous responsibility on When I went up after his talk and thanked him for coming to the shoulders of those of us who hunt. We must represent and repNebraska, he replied, “Well, thank you for having me. What brought resent well. you here tonight, Zeke?” I shared my life’s story with him, and he I realize some hunters will disagree with me, perhaps saying someseemed genuinely interested to hear the unabridged version. He has thing like, “Forget ’em. Why should we care what they think?” Some a gift of making the other person feel like the priority. might even suggest that we return the middle finger with the middle Self-respecting: I don’t mean to paint a picture of Scott that suggests finger, but that attitude only hurts our cause and feeds the negative he’s soft or pandering. Far from it. This might sound odd, but Scott is stereotypes that continue to plague our sport. One of the women in masculine to the core. I’ve always believed you can tell a lot about a the writer’s workshop told me after class one day, “I’ve never liked person by their handshake, and Scott’s gives him away. It’s not wimpy hunting, but it’s not so much the killing animals that I have a probor limp-wristed, but it doesn’t crush your hand in some selfish attempt lem with, but rather the few hunters I’ve known. They would drive to prove its strength. And for what it’s worth, Scott could crush your around town with a dead deer in the back of their truck, tailgate hand. He’s a big guy with meaty paws, but his presence makes people down, just to make us mad.” feel safe and at ease, never threatened or on edge. It seems that how non-hunters think of hunters will have a great The way Scott represents deer hunting is similar to his handshake. bearing on the future of our sport. Things such as our rights and He’s slow to speak, but when he does, you can tell that he respects privileges as sportsmen, or how successfully we recruit new people himself and his choice to hunt. He doesn’t apologize for what he into deer hunting, will be greatly affected by how we present our believes. He doesn’t try to soften the rough edges of a sport that takes sport and ourselves today. I believe in the you-catch-more-flies-withthe lives of other creatures. He’s able to acknowledge some of the honey-than-you-do-with-vinegar approach to reppin’ deer hunting difficult aspects of our bloodsport, yet in a way that demonstrates his to non-hunters. For the latest promotions, sales and news visit www.Facebook.com/WhitetailInstitute