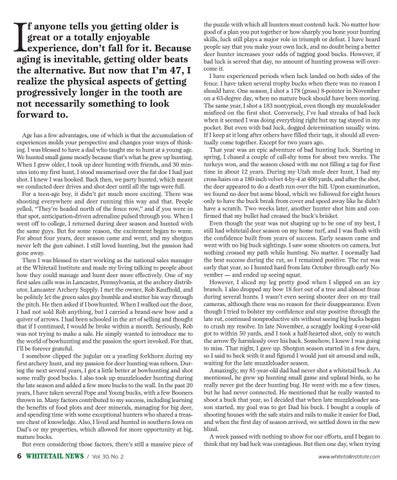 f anyone tells you getting older is great or a totally enjoyable experience, don’t fall for it. Because aging is inevitable, getting older beats the alternative. But now that I’m 47, I realize the physical aspects of getting progressively longer in the tooth are not necessarily something to look forward to. Age has a few advantages, one of which is that the accumulation of experiences molds your perspective and changes your ways of thinking. I was blessed to have a dad who taught me to hunt at a young age. We hunted small game mostly because that’s what he grew up hunting. When I grew older, I took up deer hunting with friends, and 30 minutes into my first hunt, I stood mesmerized over the fat doe I had just shot. I knew I was hooked. Back then, we party hunted, which meant we conducted deer drives and shot deer until all the tags were full. For a teen-age boy, it didn’t get much more exciting. There was shooting everywhere and deer running this way and that. People yelled, “They’re headed north of the fence row,” and if you were in that spot, anticipation-driven adrenaline pulsed through you. When I went off to college, I returned during deer season and hunted with the same guys. But for some reason, the excitement began to wane. For about four years, deer season came and went, and my shotgun never left the gun cabinet. I still loved hunting, but the passion had gone away. Then I was blessed to start working as the national sales manager at the Whitetail Institute and made my living talking to people about how they could manage and hunt deer more effectively. One of my first sales calls was in Lancaster, Pennsylvania, at the archery distributor, Lancaster Archery Supply. I met the owner, Rob Kaufhold, and he politely let the green sales guy bumble and stutter his way through the pitch. He then asked if I bowhunted. When I walked out the door, I had not sold Rob anything, but I carried a brand-new bow and a quiver of arrows. I had been schooled in the art of selling and thought that if I continued, I would be broke within a month. Seriously, Rob was not trying to make a sale. He simply wanted to introduce me to the world of bowhunting and the passion the sport invoked. For that, I’ll be forever grateful. I somehow clipped the jugular on a yearling forkhorn during my first archery hunt, and my passion for deer hunting was reborn. During the next several years, I got a little better at bowhunting and shot some really good bucks. I also took up muzzleloader hunting during the late season and added a few more bucks to the wall. In the past 20 years, I have taken several Pope and Young bucks, with a few Booners thrown in. Many factors contributed to my success, including learning the benefits of food plots and deer minerals, managing for big deer, and spending time with some exceptional hunters who shared a treasure chest of knowledge. Also, I lived and hunted in southern Iowa on Dad’s or my properties, which allowed for more opportunity at big, mature bucks. But even considering those factors, there’s still a massive piece of

the puzzle with which all hunters must contend: luck. No matter how good of a plan you put together or how sharply you hone your hunting skills, luck still plays a major role in triumph or defeat. I have heard people say that you make your own luck, and no doubt being a better deer hunter increases your odds of tagging good bucks. However, if bad luck is served that day, no amount of hunting prowess will overcome it. I have experienced periods when luck landed on both sides of the fence. I have taken several trophy bucks when there was no reason I should have. One season, I shot a 178 (gross) 8-pointer in November on a 63-degree day, when no mature buck should have been moving. The same year, I shot a 183 nontypical, even though my muzzleloader misfired on the first shot. Conversely, I’ve had streaks of bad luck when it seemed I was doing everything right but my tag stayed in my pocket. But even with bad luck, dogged determination usually wins. If I keep at it long after others have filled their tags, it should all eventually come together. Except for two years ago. That year was an epic adventure of bad hunting luck. Starting in spring, I chased a couple of call-shy toms for about two weeks. The turkeys won, and the season closed with me not filling a tag for first time in about 12 years. During my Utah mule deer hunt, I had my cross-hairs on a 180-inch velvet 4-by-4 at 400 yards, and after the shot, the deer appeared to do a death run over the hill. Upon examination, we found no deer but some blood, which we followed for eight hours only to have the buck break from cover and speed away like he didn’t have a scratch. Two weeks later, another hunter shot him and confirmed that my bullet had creased the buck’s brisket. Even though the year was not shaping up to be one of my best, I still had whitetail deer season on my home turf, and I was flush with the confidence built from years of success. Early season came and went with no big buck sightings. I saw some shooters on camera, but nothing crossed my path while hunting. No matter. I normally had the best success during the rut, so I remained positive. The rut was early that year, so I hunted hard from late October through early November — and ended up seeing squat. However, I sliced my leg pretty good when I slipped on an icy branch. I also dropped my bow 18 feet out of a tree and almost froze during several hunts. I wasn’t even seeing shooter deer on my trail cameras, although there was no reason for their disappearance. Even though I tried to bolster my confidence and stay positive through the late rut, continued nonproductive sits without seeing big bucks began to crush my resolve. In late November, a scraggly looking 4-year-old got to within 50 yards, and I took a half-hearted shot, only to watch the arrow fly harmlessly over his back. Somehow, I knew I was going to miss. That night, I gave up. Shotgun season started in a few days, so I said to heck with it and figured I would just sit around and sulk, waiting for the late muzzleloader season. Amazingly, my 81-year-old dad had never shot a whitetail buck. As mentioned, he grew up hunting small game and upland birds, so he really never got the deer hunting bug. He went with me a few times, but he had never connected. He mentioned that he really wanted to shoot a buck that year, so I decided that when late muzzleloader season started, my goal was to get Dad his buck. I bought a couple of shooting houses with the safe stairs and rails to make it easier for Dad, and when the first day of season arrived, we settled down in the new blind. A week passed with nothing to show for our efforts, and I began to think that my bad luck was contagious. But then one day, when trying www.whitetailinstitute.com