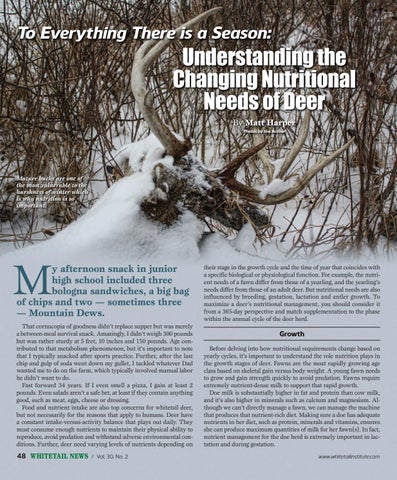 To Everything There is a Season:

Mature bucks are one of the most vulnerable to the harshness of winter which is why nutrition is so important.

y afternoon snack in junior high school included three bologna sandwiches, a big bag of chips and two — sometimes three — Mountain Dews. That cornucopia of goodness didn’t replace supper but was merely a between-meal survival snack. Amazingly, I didn’t weigh 300 pounds but was rather sturdy at 5 feet, 10 inches and 150 pounds. Age contributed to that metabolism phenomenon, but it’s important to note that I typically snacked after sports practice. Further, after the last chip and gulp of soda went down my gullet, I tackled whatever Dad wanted me to do on the farm, which typically involved manual labor he didn’t want to do. Fast forward 34 years. If I even smell a pizza, I gain at least 2 pounds. Even salads aren’t a safe bet, at least if they contain anything good, such as meat, eggs, cheese or dressing. Food and nutrient intake are also top concerns for whitetail deer, but not necessarily for the reasons that apply to humans. Deer have a constant intake-versus-activity balance that plays out daily. They must consume enough nutrients to maintain their physical ability to reproduce, avoid predation and withstand adverse environmental conditions. Further, deer need varying levels of nutrients depending on

their stage in the growth cycle and the time of year that coincides with a specific biological or physiological function. For example, the nutrient needs of a fawn differ from those of a yearling, and the yearling’s needs differ from those of an adult deer. But nutritional needs are also influenced by breeding, gestation, lactation and antler growth. To maximize a deer’s nutritional management, you should consider it from a 365-day perspective and match supplementation to the phase within the annual cycle of the deer herd.

Growth Before delving into how nutritional requirements change based on yearly cycles, it’s important to understand the role nutrition plays in the growth stages of deer. Fawns are the most rapidly growing age class based on skeletal gain versus body weight. A young fawn needs to grow and gain strength quickly to avoid predation. Fawns require extremely nutrient-dense milk to support that rapid growth. Doe milk is substantially higher in fat and protein than cow milk, and it’s also higher in minerals such as calcium and magnesium. Although we can’t directly manage a fawn, we can manage the machine that produces that nutrient-rich diet. Making sure a doe has adequate nutrients in her diet, such as protein, minerals and vitamins, ensures she can produce maximum quantities of milk for her fawn(s). In fact, nutrient management for the doe herd is extremely important in lactation and during gestation. www.whitetailinstitute.com