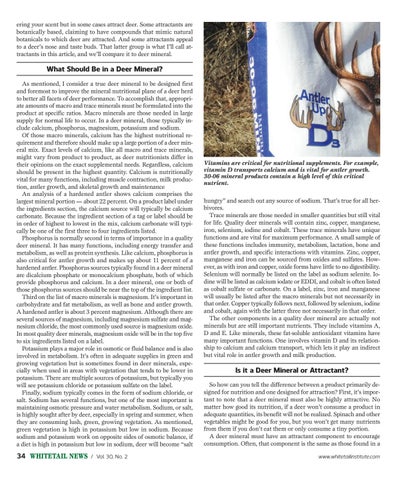 ering your scent but in some cases attract deer. Some attractants are botanically based, claiming to have compounds that mimic natural botanicals to which deer are attracted. And some attractants appeal to a deer’s nose and taste buds. That latter group is what I’ll call attractants in this article, and we’ll compare it to deer mineral.

What Should Be in a Deer Mineral? As mentioned, I consider a true deer mineral to be designed first and foremost to improve the mineral nutritional plane of a deer herd to better all facets of deer performance. To accomplish that, appropriate amounts of macro and trace minerals must be formulated into the product at specific ratios. Macro minerals are those needed in large supply for normal life to occur. In a deer mineral, those typically include calcium, phosphorus, magnesium, potassium and sodium. Of those macro minerals, calcium has the highest nutritional requirement and therefore should make up a large portion of a deer mineral mix. Exact levels of calcium, like all macro and trace minerals, might vary from product to product, as deer nutritionists differ in their opinions on the exact supplemental needs. Regardless, calcium should be present in the highest quantity. Calcium is nutritionally vital for many functions, including muscle contraction, milk production, antler growth, and skeletal growth and maintenance An analysis of a hardened antler shows calcium comprises the largest mineral portion — about 22 percent. On a product label under the ingredients section, the calcium source will typically be calcium carbonate. Because the ingredient section of a tag or label should be in order of highest to lowest in the mix, calcium carbonate will typically be one of the first three to four ingredients listed. Phosphorus is normally second in terms of importance in a quality deer mineral. It has many functions, including energy transfer and metabolism, as well as protein synthesis. Like calcium, phosphorus is also critical for antler growth and makes up about 11 percent of a hardened antler. Phosphorus sources typically found in a deer mineral are dicalcium phosphate or monocalcium phosphate, both of which provide phosphorus and calcium. In a deer mineral, one or both of those phosphorus sources should be near the top of the ingredient list. Third on the list of macro minerals is magnesium. It’s important in carbohydrate and fat metabolism, as well as bone and antler growth. A hardened antler is about 3 percent magnesium. Although there are several sources of magnesium, including magnesium sulfate and magnesium chloride, the most commonly used source is magnesium oxide. In most quality deer minerals, magnesium oxide will be in the top five to six ingredients listed on a label. Potassium plays a major role in osmotic or fluid balance and is also involved in metabolism. It’s often in adequate supplies in green and growing vegetation but is sometimes found in deer minerals, especially when used in areas with vegetation that tends to be lower in potassium. There are multiple sources of potassium, but typically you will see potassium chloride or potassium sulfate on the label. Finally, sodium typically comes in the form of sodium chloride, or salt. Sodium has several functions, but one of the most important is maintaining osmotic pressure and water metabolism. Sodium, or salt, is highly sought after by deer, especially in spring and summer, when they are consuming lush, green, growing vegetation. As mentioned, green vegetation is high in potassium but low in sodium. Because sodium and potassium work on opposite sides of osmotic balance, if a diet is high in potassium but low in sodium, deer will become “salt

Vitamins are critical for nutritional supplements. For example, vitamin D transports calcium and is vital for antler growth. 30-06 mineral products contain a high level of this critical nutrient. hungry” and search out any source of sodium. That’s true for all herbivores. Trace minerals are those needed in smaller quantities but still vital for life. Quality deer minerals will contain zinc, copper, manganese, iron, selenium, iodine and cobalt. These trace minerals have unique functions and are vital for maximum performance. A small sample of these functions includes immunity, metabolism, lactation, bone and antler growth, and specific interactions with vitamins. Zinc, copper, manganese and iron can be sourced from oxides and sulfates. However, as with iron and copper, oxide forms have little to no digestibility. Selenium will normally be listed on the label as sodium selenite. Iodine will be listed as calcium iodate or EDDI, and cobalt is often listed as cobalt sulfate or carbonate. On a label, zinc, iron and manganese will usually be listed after the macro minerals but not necessarily in that order. Copper typically follows next, followed by selenium, iodine and cobalt, again with the latter three not necessarily in that order. The other components in a quality deer mineral are actually not minerals but are still important nutrients. They include vitamins A, D and E. Like minerals, these fat-soluble antioxidant vitamins have many important functions. One involves vitamin D and its relationship to calcium and calcium transport, which lets it play an indirect but vital role in antler growth and milk production.

Is it a Deer Mineral or Attractant? So how can you tell the difference between a product primarily designed for nutrition and one designed for attraction? First, it’s important to note that a deer mineral must also be highly attractive. No matter how good its nutrition, if a deer won’t consume a product in adequate quantities, its benefit will not be realized. Spinach and other vegetables might be good for you, but you won’t get many nutrients from them if you don’t eat them or only consume a tiny portion. A deer mineral must have an attractant component to encourage consumption. Often, that component is the same as those found in a www.whitetailinstitute.com