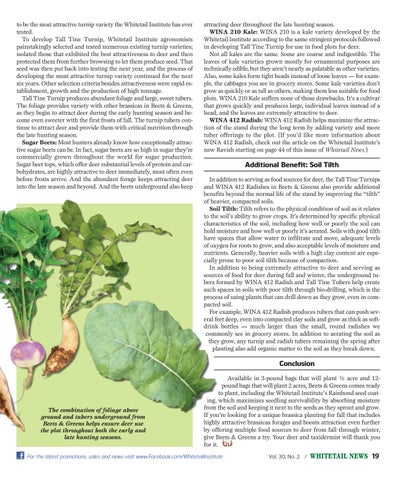 to be the most attractive turnip variety the Whitetail Institute has ever tested. To develop Tall Tine Turnip, Whitetail Institute agronomists painstakingly selected and tested numerous existing turnip varieties; isolated those that exhibited the best attractiveness to deer and then protected them from further browsing to let them produce seed. That seed was then put back into testing the next year, and the process of developing the most attractive turnip variety continued for the next six years. Other selection criteria besides attractiveness were rapid establishment, growth and the production of high tonnage. Tall Tine Turnip produces abundant foliage and large, sweet tubers. The foliage provides variety with other brassicas in Beets & Greens, as they begin to attract deer during the early hunting season and become even sweeter with the first frosts of fall. The turnip tubers continue to attract deer and provide them with critical nutrition through the late hunting season. Sugar Beets: Most hunters already know how exceptionally attractive sugar beets can be. In fact, sugar beets are so high in sugar they’re commercially grown throughout the world for sugar production. Sugar beet tops, which offer deer substantial levels of protein and carbohydrates, are highly attractive to deer immediately, most often even before frosts arrive. And the abundant forage keeps attracting deer into the late season and beyond. And the beets underground also keep

attracting deer throughout the late hunting season. WINA 210 Kale: WINA 210 is a kale variety developed by the Whitetail Institute according to the same stringent protocols followed in developing Tall Tine Turnip for use in food plots for deer. Not all kales are the same. Some are coarse and indigestible. The leaves of kale varieties grown mostly for ornamental purposes are technically edible, but they aren’t nearly as palatable as other varieties. Also, some kales form tight heads instead of loose leaves — for example, the cabbages you see in grocery stores. Some kale varieties don’t grow as quickly or as tall as others, making them less suitable for food plots. WINA 210 Kale suffers none of those drawbacks. It’s a cultivar that grows quickly and produces large, individual leaves instead of a head, and the leaves are extremely attractive to deer. WINA 412 Radish: WINA 412 Radish helps maximize the attraction of the stand during the long term by adding variety and more tuber offerings to the plot. (If you’d like more information about WINA 412 Radish, check out the article on the Whitetail Institute’s new Ravish starting on page 44 of this issue of Whitetail News.)

Additional Beneﬁt: Soil Tilth In addition to serving as food sources for deer, the Tall Tine Turnips and WINA 412 Radishes in Beets & Greens also provide additional benefits beyond the normal life of the stand by improving the “tilth” of heavier, compacted soils. Soil Tilth: Tilth refers to the physical condition of soil as it relates to the soil’s ability to grow crops. It’s determined by specific physical characteristics of the soil, including how well or poorly the soil can hold moisture and how well or poorly it’s aerated. Soils with good tilth have spaces that allow water to infiltrate and move, adequate levels of oxygen for roots to grow, and also acceptable levels of moisture and nutrients. Generally, heavier soils with a high clay content are especially prone to poor soil tilth because of compaction. In addition to being extremely attractive to deer and serving as sources of food for deer during fall and winter, the underground tubers formed by WINA 412 Radish and Tall Tine Tubers help create such spaces in soils with poor tilth through bio-drilling, which is the process of using plants that can drill down as they grow, even in compacted soil. For example, WINA 412 Radish produces tubers that can push several feet deep, even into compacted clay soils and grow as thick as softdrink bottles — much larger than the small, round radishes we commonly see in grocery stores. In addition to aerating the soil as they grow, any turnip and radish tubers remaining the spring after planting also add organic matter to the soil as they break down.

The combination of foliage above ground and tubers underground from Beets & Greens helps ensure deer use the plot throughout both the early and late hunting seasons.

Available in 3-pound bags that will plant ½ acre and 12pound bags that will plant 2 acres, Beets & Greens comes ready to plant, including the Whitetail Institute’s Rainbond seed coating, which maximizes seedling survivability by absorbing moisture from the soil and keeping it next to the seeds as they sprout and grow. If you’re looking for a unique brassica planting for fall that includes highly attractive brassicas forages and boosts attraction even further by offering multiple food sources to deer from fall through winter, give Beets & Greens a try. Your deer and taxidermist will thank you for it. ^