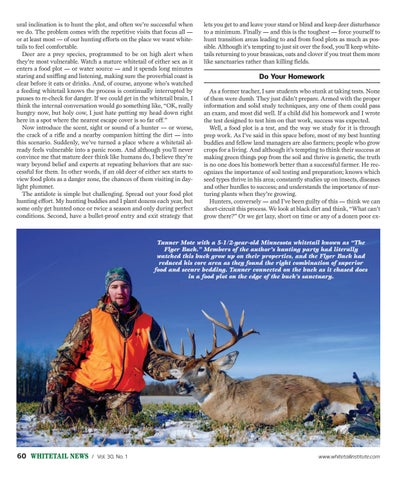 ural inclination is to hunt the plot, and often we’re successful when we do. The problem comes with the repetitive visits that focus all — or at least most — of our hunting efforts on the place we want whitetails to feel comfortable. Deer are a prey species, programmed to be on high alert when they’re most vulnerable. Watch a mature whitetail of either sex as it enters a food plot — or water source — and it spends long minutes staring and sniffing and listening, making sure the proverbial coast is clear before it eats or drinks. And, of course, anyone who’s watched a feeding whitetail knows the process is continually interrupted by pauses to re-check for danger. If we could get in the whitetail brain, I think the internal conversation would go something like, “OK, really hungry now, but holy cow, I just hate putting my head down right here in a spot where the nearest escape cover is so far off.” Now introduce the scent, sight or sound of a hunter — or worse, the crack of a rifle and a nearby companion hitting the dirt — into this scenario. Suddenly, we’ve turned a place where a whitetail already feels vulnerable into a panic room. And although you’ll never convince me that mature deer think like humans do, I believe they’re wary beyond belief and experts at repeating behaviors that are successful for them. In other words, if an old deer of either sex starts to view food plots as a danger zone, the chances of them visiting in daylight plummet. The antidote is simple but challenging. Spread out your food plot hunting effort. My hunting buddies and I plant dozens each year, but some only get hunted once or twice a season and only during perfect conditions. Second, have a bullet-proof entry and exit strategy that

lets you get to and leave your stand or blind and keep deer disturbance to a minimum. Finally — and this is the toughest — force yourself to hunt transition areas leading to and from food plots as much as possible. Although it’s tempting to just sit over the food, you’ll keep whitetails returning to your brassicas, oats and clover if you treat them more like sanctuaries rather than killing fields.

Do Your Homework As a former teacher, I saw students who stunk at taking tests. None of them were dumb. They just didn’t prepare. Armed with the proper information and solid study techniques, any one of them could pass an exam, and most did well. If a child did his homework and I wrote the test designed to test him on that work, success was expected. Well, a food plot is a test, and the way we study for it is through prep work. As I’ve said in this space before, most of my best hunting buddies and fellow land managers are also farmers; people who grow crops for a living. And although it’s tempting to think their success at making green things pop from the soil and thrive is genetic, the truth is no one does his homework better than a successful farmer. He recognizes the importance of soil testing and preparation; knows which seed types thrive in his area; constantly studies up on insects, diseases and other hurdles to success; and understands the importance of nurturing plants when they’re growing. Hunters, conversely — and I’ve been guilty of this — think we can short-circuit this process. We look at black dirt and think, “What can’t grow there?” Or we get lazy, short on time or any of a dozen poor ex-

Tanner Mote with a 5-1/2-year-old Minnesota whitetail known as “The Flyer Buck.” Members of the author's hunting party had literally watched this buck grow up on their properties, and the Flyer Buck had reduced his core area as they found the right combination of superior food and secure bedding. Tanner connected on the buck as it chased does in a food plot on the edge of the buck’s sanctuary.