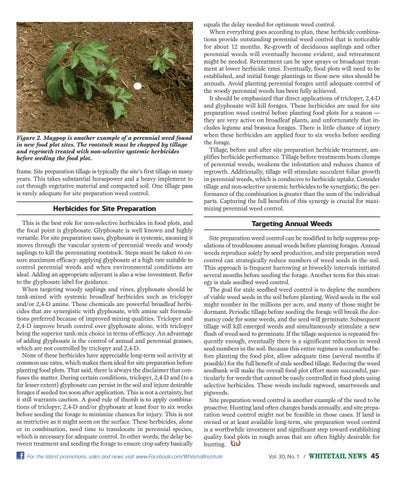 Figure 2. Maypop is another example of a perennial weed found in new food plot sites. The rootstock must be chopped by tillage and regrowth treated with non-selective systemic herbicides before seeding the food plot. frame. Site preparation tillage is typically the siteâ&#x20AC;&#x2122;s first tillage in many years. This takes substantial horsepower and a heavy implement to cut through vegetative material and compacted soil. One tillage pass is rarely adequate for site preparation weed control.

Herbicides for Site Preparation This is the best role for non-selective herbicides in food plots, and the focal point is glyphosate. Glyphosate is well known and highly versatile. For site preparation uses, glyphosate is systemic, meaning it moves through the vascular system of perennial weeds and woody saplings to kill the perennating rootstock. Steps must be taken to ensure maximum efficacy: applying glyphosate at a high rate suitable to control perennial weeds and when environmental conditions are ideal. Adding an appropriate adjuvant is also a wise investment. Refer to the glyphosate label for guidance. When targeting woody saplings and vines, glyphosate should be tank-mixed with systemic broadleaf herbicides such as triclopyr and/or 2,4-D amine. These chemicals are powerful broadleaf herbicides that are synergistic with glyphosate, with amine salt formulations preferred because of improved mixing qualities. Triclopyr and 2,4-D improve brush control over glyphosate alone, with triclopyr being the superior tank-mix choice in terms of efficacy. An advantage of adding glyphosate is the control of annual and perennial grasses, which are not controlled by triclopyr and 2,4-D. None of these herbicides have appreciable long-term soil activity at common use rates, which makes them ideal for site preparation before planting food plots. That said, there is always the disclaimer that confuses the matter. During certain conditions, triclopyr, 2,4-D and (to a far lesser extent) glyphosate can persist in the soil and injure desirable forages if seeded too soon after application. This is not a certainty, but it still warrants caution. A good rule of thumb is to apply combinations of triclopyr, 2,4-D and/or glyphosate at least four to six weeks before seeding the forage to minimize chances for injury. This is not as restrictive as it might seem on the surface. These herbicides, alone or in combination, need time to translocate in perennial species, which is necessary for adequate control. In other words, the delay between treatment and seeding the forage to ensure crop safety basically

equals the delay needed for optimum weed control. When everything goes according to plan, these herbicide combinations provide outstanding perennial weed control that is noticeable for about 12 months. Re-growth of deciduous saplings and other perennial weeds will eventually become evident, and retreatment might be needed. Retreatment can be spot sprays or broadcast treatment at lower herbicide rates. Eventually, food plots will need to be established, and initial forage plantings in these new sites should be annuals. Avoid planting perennial forages until adequate control of the woody perennial weeds has been fully achieved. It should be emphasized that direct applications of triclopyr, 2,4-D and glyphosate will kill forages. These herbicides are used for site preparation weed control before planting food plots for a reason â&#x20AC;&#x201D; they are very active on broadleaf plants, and unfortunately that includes legume and brassica forages. There is little chance of injury when these herbicides are applied four to six weeks before seeding the forage. Tillage, before and after site preparation herbicide treatment, amplifies herbicide performance. Tillage before treatments busts clumps of perennial weeds, weakens the infestation and reduces chance of regrowth. Additionally, tillage will stimulate succulent foliar growth in perennial weeds, which is conducive to herbicide uptake. Consider tillage and non-selective systemic herbicides to be synergistic; the performance of the combination is greater than the sum of the individual parts. Capturing the full benefits of this synergy is crucial for maximizing perennial weed control.

Targeting Annual Weeds Site preparation weed control can be modified to help suppress populations of troublesome annual weeds before planting forages. Annual weeds reproduce solely by seed production, and site preparation weed control can strategically reduce numbers of weed seeds in the soil. This approach is frequent harrowing at biweekly intervals initiated several months before seeding the forage. Another term for this strategy is stale seedbed weed control. The goal for stale seedbed weed control is to deplete the numbers of viable weed seeds in the soil before planting. Weed seeds in the soil might number in the millions per acre, and many of those might be dormant. Periodic tillage before seeding the forage will break the dormancy code for some weeds, and the seed will germinate. Subsequent tillage will kill emerged weeds and simultaneously stimulate a new flush of weed seed to germinate. If the tillage sequence is repeated frequently enough, eventually there is a significant reduction in weed seed numbers in the soil. Because this entire regimen is conducted before planting the food plot, allow adequate time (several months if possible) for the full benefit of stale seedbed tillage. Reducing the weed seedbank will make the overall food plot effort more successful, particularly for weeds that cannot be easily controlled in food plots using selective herbicides. These weeds include ragweed, smartweeds and pigweeds. Site preparation weed control is another example of the need to be proactive. Hunting land often changes hands annually, and site preparation weed control might not be feasible in those cases. If land is owned or at least available long-term, site preparation weed control is a worthwhile investment and significant step toward establishing quality food plots in rough areas that are often highly desirable for hunting. ^