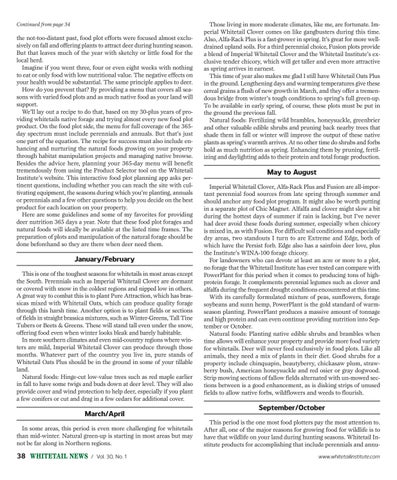 the not-too-distant past, food plot efforts were focused almost exclusively on fall and offering plants to attract deer during hunting season. But that leaves much of the year with sketchy or little food for the local herd. Imagine if you went three, four or even eight weeks with nothing to eat or only food with low nutritional value. The negative effects on your health would be substantial. The same principle applies to deer. How do you prevent that? By providing a menu that covers all seasons with varied food plots and as much native food as your land will support. We’ll lay out a recipe to do that, based on my 30-plus years of providing whitetails native forage and trying almost every new food plot product. On the food plot side, the menu for full coverage of the 365day spectrum must include perennials and annuals. But that’s just one part of the equation. The recipe for success must also include enhancing and nurturing the natural foods growing on your property through habitat manipulation projects and managing native browse. Besides the advice here, planning your 365-day menu will benefit tremendously from using the Product Selector tool on the Whitetail Institute’s website. This interactive food plot planning app asks pertinent questions, including whether you can reach the site with cultivating equipment, the seasons during which you’re planting, annuals or perennials and a few other questions to help you decide on the best product for each location on your property. Here are some guidelines and some of my favorites for providing deer nutrition 365 days a year. Note that these food plot forages and natural foods will ideally be available at the listed time frames. The preparation of plots and manipulation of the natural forage should be done beforehand so they are there when deer need them.

January/February This is one of the toughest seasons for whitetails in most areas except the South. Perennials such as Imperial Whitetail Clover are dormant or covered with snow in the coldest regions and nipped low in others. A great way to combat this is to plant Pure Attraction, which has brassicas mixed with Whitetail Oats, which can produce quality forage through this harsh time. Another option is to plant fields or sections of fields in straight brassica mixtures, such as Winter-Greens, Tall Tine Tubers or Beets & Greens. These will stand tall even under the snow, offering food even when winter looks bleak and barely habitable. In more southern climates and even mid-country regions where winters are mild, Imperial Whitetail Clover can produce through those months. Whatever part of the country you live in, pure stands of Whitetail Oats Plus should be in the ground in some of your tillable land. Natural foods: Hinge-cut low-value trees such as red maple earlier in fall to have some twigs and buds down at deer level. They will also provide cover and wind protection to help deer, especially if you plant a few conifers or cut and drag in a few cedars for additional cover.

March/April In some areas, this period is even more challenging for whitetails than mid-winter. Natural green-up is starting in most areas but may not be far along in Northern regions.

Those living in more moderate climates, like me, are fortunate. Imperial Whitetail Clover comes on like gangbusters during this time. Also, Alfa-Rack Plus is a fast-grower in spring. It’s great for more welldrained upland soils. For a third perennial choice, Fusion plots provide a blend of Imperial Whitetail Clover and the Whitetail Institute’s exclusive tender chicory, which will get taller and even more attractive as spring arrives in earnest. This time of year also makes me glad I still have Whitetail Oats Plus in the ground. Lengthening days and warming temperatures give these cereal grains a flush of new growth in March, and they offer a tremendous bridge from winter’s tough conditions to spring’s full green-up. To be available in early spring, of course, these plots must be put in the ground the previous fall. Natural foods: Fertilizing wild brambles, honeysuckle, greenbrier and other valuable edible shrubs and pruning back nearby trees that shade them in fall or winter will improve the output of these native plants as spring’s warmth arrives. At no other time do shrubs and forbs hold as much nutrition as spring. Enhancing them by pruning, fertilizing and daylighting adds to their protein and total forage production.

May to August Imperial Whitetail Clover, Alfa-Rack Plus and Fusion are all-important perennial food sources from late spring through summer and should anchor any food plot program. It might also be worth putting in a separate plot of Chic Magnet. Alfalfa and clover might slow a bit during the hottest days of summer if rain is lacking, but I’ve never had deer avoid these foods during summer, especially when chicory is mixed in, as with Fusion. For difficult soil conditions and especially dry areas, two standouts I turn to are Extreme and Edge, both of which have the Persist forb. Edge also has a sainfoin deer love, plus the Institute’s WINA-100 forage chicory. For landowners who can devote at least an acre or more to a plot, no forage that the Whitetail Institute has ever tested can compare with PowerPlant for this period when it comes to producing tons of highprotein forage. It complements perennial legumes such as clover and alfalfa during the frequent drought conditions encountered at this time. With its carefully formulated mixture of peas, sunflowers, forage soybeans and sunn hemp, PowerPlant is the gold standard of warmseason planting. PowerPlant produces a massive amount of tonnage and high protein and can even continue providing nutrition into September or October. Natural foods: Planting native edible shrubs and brambles when time allows will enhance your property and provide more food variety for whitetails. Deer will never feed exclusively in food plots. Like all animals, they need a mix of plants in their diet. Good shrubs for a property include chinquapin, beautyberry, chickasaw plum, strawberry bush, American honeysuckle and red osier or gray dogwood. Strip mowing sections of fallow fields alternated with un-mowed sections between is a good enhancement, as is disking strips of unused fields to allow native forbs, wildflowers and weeds to flourish.

September/October This period is the one most food plotters pay the most attention to. After all, one of the major reasons for growing food for wildlife is to have that wildlife on your land during hunting seasons. Whitetail Institute products for accomplishing that include perennials and annuwww.whitetailinstitute.com