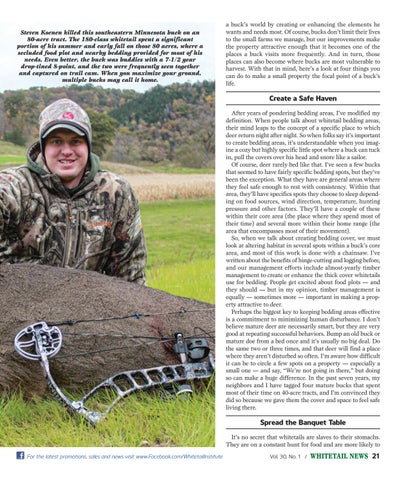 Steven Koenen killed this southeastern Minnesota buck on an 80-acre tract. The 180-class whitetail spent a significant portion of his summer and early fall on those 80 acres, where a secluded food plot and nearby bedding provided for most of his needs. Even better, the buck was buddies with a 7-1/2 year drop-tined 8-point, and the two were frequently seen together and captured on trail cam. When you maximize your ground, multiple bucks may call it home.

a buck’s world by creating or enhancing the elements he wants and needs most. Of course, bucks don’t limit their lives to the small farms we manage, but our improvements make the property attractive enough that it becomes one of the places a buck visits more frequently. And in turn, those places can also become where bucks are most vulnerable to harvest. With that in mind, here’s a look at four things you can do to make a small property the focal point of a buck’s life.

Create a Safe Haven After years of pondering bedding areas, I’ve modified my definition. When people talk about whitetail bedding areas, their mind leaps to the concept of a specific place to which deer return night after night. So when folks say it’s important to create bedding areas, it’s understandable when you imagine a cozy but highly specific little spot where a buck can tuck in, pull the covers over his head and snore like a sailor. Of course, deer rarely bed like that. I’ve seen a few bucks that seemed to have fairly specific bedding spots, but they’ve been the exception. What they have are general areas where they feel safe enough to rest with consistency. Within that area, they’ll have specifics spots they choose to sleep depending on food sources, wind direction, temperature, hunting pressure and other factors. They’ll have a couple of these within their core area (the place where they spend most of their time) and several more within their home range (the area that encompasses most of their movement). So, when we talk about creating bedding cover, we must look at altering habitat in several spots within a buck’s core area, and most of this work is done with a chainsaw. I’ve written about the benefits of hinge-cutting and logging before, and our management efforts include almost-yearly timber management to create or enhance the thick cover whitetails use for bedding. People get excited about food plots — and they should — but in my opinion, timber management is equally — sometimes more — important in making a property attractive to deer. Perhaps the biggest key to keeping bedding areas effective is a commitment to minimizing human disturbance. I don’t believe mature deer are necessarily smart, but they are very good at repeating successful behaviors. Bump an old buck or mature doe from a bed once and it’s usually no big deal. Do the same two or three times, and that deer will find a place where they aren’t disturbed so often. I’m aware how difficult it can be to circle a few spots on a property — especially a small one — and say, “We’re not going in there,” but doing so can make a huge difference. In the past seven years, my neighbors and I have tagged four mature bucks that spent most of their time on 40-acre tracts, and I’m convinced they did so because we gave them the cover and space to feel safe living there.

Spread the Banquet Table It’s no secret that whitetails are slaves to their stomachs. They are on a constant hunt for food and are more likely to For the latest promotions, sales and news visit www.Facebook.com/WhitetailInstitute