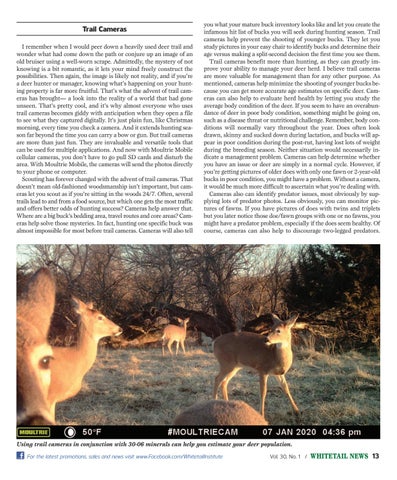 Trail Cameras I remember when I would peer down a heavily used deer trail and wonder what had come down the path or conjure up an image of an old bruiser using a well-worn scrape. Admittedly, the mystery of not knowing is a bit romantic, as it lets your mind freely construct the possibilities. Then again, the image is likely not reality, and if you’re a deer hunter or manager, knowing what’s happening on your hunting property is far more fruitful. That’s what the advent of trail cameras has brought— a look into the reality of a world that had gone unseen. That’s pretty cool, and it’s why almost everyone who uses trail cameras becomes giddy with anticipation when they open a file to see what they captured digitally. It’s just plain fun, like Christmas morning, every time you check a camera. And it extends hunting season far beyond the time you can carry a bow or gun. But trail cameras are more than just fun. They are invaluable and versatile tools that can be used for multiple applications. And now with Moultrie Mobile cellular cameras, you don’t have to go pull SD cards and disturb the area. With Moultrie Mobile, the cameras will send the photos directly to your phone or computer. Scouting has forever changed with the advent of trail cameras. That doesn’t mean old-fashioned woodsmanship isn’t important, but cameras let you scout as if you’re sitting in the woods 24/7. Often, several trails lead to and from a food source, but which one gets the most traffic and offers better odds of hunting success? Cameras help answer that. Where are a big buck’s bedding area, travel routes and core areas? Cameras help solve those mysteries. In fact, hunting one specific buck was almost impossible for most before trail cameras. Cameras will also tell

you what your mature buck inventory looks like and let you create the infamous hit list of bucks you will seek during hunting season. Trail cameras help prevent the shooting of younger bucks. They let you study pictures in your easy chair to identify bucks and determine their age versus making a split-second decision the first time you see them. Trail cameras benefit more than hunting, as they can greatly improve your ability to manage your deer herd. I believe trail cameras are more valuable for management than for any other purpose. As mentioned, cameras help minimize the shooting of younger bucks because you can get more accurate age estimates on specific deer. Cameras can also help to evaluate herd health by letting you study the average body condition of the deer. If you seem to have an overabundance of deer in poor body condition, something might be going on, such as a disease threat or nutritional challenge. Remember, body conditions will normally vary throughout the year. Does often look drawn, skinny and sucked down during lactation, and bucks will appear in poor condition during the post-rut, having lost lots of weight during the breeding season. Neither situation would necessarily indicate a management problem. Cameras can help determine whether you have an issue or deer are simply in a normal cycle. However, if you’re getting pictures of older does with only one fawn or 2-year-old bucks in poor condition, you might have a problem. Without a camera, it would be much more difficult to ascertain what you’re dealing with. Cameras also can identify predator issues, most obviously by supplying lots of predator photos. Less obviously, you can monitor pictures of fawns. If you have pictures of does with twins and triplets but you later notice those doe/fawn groups with one or no fawns, you might have a predator problem, especially if the does seem healthy. Of course, cameras can also help to discourage two-legged predators.

Using trail cameras in conjunction with 30-06 minerals can help you estimate your deer population. For the latest promotions, sales and news visit www.Facebook.com/WhitetailInstitute