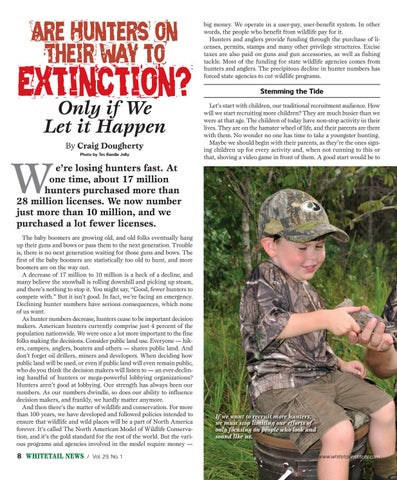 Are Hunters on Their Way to

Extinction? Only if We Let it Happen By Craig Dougherty Photo by Tes Randle Jolly

big money. We operate in a user-pay, user-benefit system. In other words, the people who benefit from wildlife pay for it. Hunters and anglers provide funding through the purchase of licenses, permits, stamps and many other privilege structures. Excise taxes are also paid on guns and gun accessories, as well as fishing tackle. Most of the funding for state wildlife agencies comes from hunters and anglers. The precipitous decline in hunter numbers has forced state agencies to cut wildlife programs.

Stemming the Tide Let’s start with children, our traditional recruitment audience. How will we start recruiting more children? They are much busier than we were at that age. The children of today have non-stop activity in their lives. They are on the hamster wheel of life, and their parents are there with them. No wonder no one has time to take a youngster hunting. Maybe we should begin with their parents, as they’re the ones signing children up for every activity and, when not running to this or that, shoving a video game in front of them. A good start would be to

e’re losing hunters fast. At one time, about 17 million hunters purchased more than 28 million licenses. We now number just more than 10 million, and we purchased a lot fewer licenses. The baby boomers are growing old, and old folks eventually hang up their guns and bows or pass them to the next generation. Trouble is, there is no next generation waiting for those guns and bows. The first of the baby boomers are statistically too old to hunt, and more boomers are on the way out. A decrease of 17 million to 10 million is a heck of a decline, and many believe the snowball is rolling downhill and picking up steam, and there’s nothing to stop it. You might say, “Good, fewer hunters to compete with.” But it isn’t good. In fact, we’re facing an emergency. Declining hunter numbers have serious consequences, which none of us want. As hunter numbers decrease, hunters cease to be important decision makers. American hunters currently comprise just 4 percent of the population nationwide. We were once a lot more important to the fine folks making the decisions. Consider public land use. Everyone — hikers, campers, anglers, boaters and others — shares public land. And don’t forget oil drillers, miners and developers. When deciding how public land will be used, or even if public land will even remain public, who do you think the decision makers will listen to — an ever-declining handful of hunters or mega-powerful lobbying organizations? Hunters aren’t good at lobbying. Our strength has always been our numbers. As our numbers dwindle, so does our ability to influence decision makers, and frankly, we hardly matter anymore. And then there’s the matter of wildlife and conservation. For more than 100 years, we have developed and followed policies intended to ensure that wildlife and wild places will be a part of North America forever. It’s called The North American Model of Wildlife Conservation, and it’s the gold standard for the rest of the world. But the various programs and agencies involved in the model require money —

If we want to recruit more hunters, we must stop limiting our efforts of only focusing on people who look and sound like us. www.whitetailinstitute.com