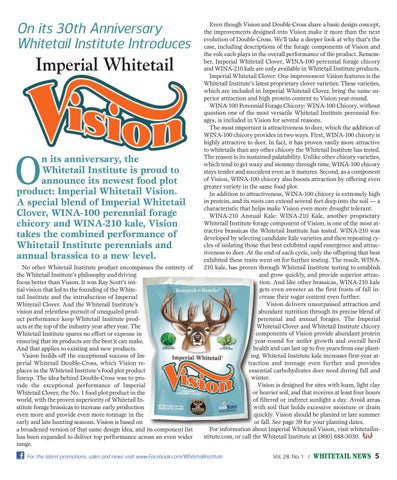 Even though Vision and Double-Cross share a basic design concept, the improvements designed into Vision make it more than the next evolution of Double-Cross. We’ll take a deeper look at why that’s the case, including descriptions of the forage components of Vision and the role each plays in the overall performance of the product. Remember, Imperial Whitetail Clover, WINA-100 perennial forage chicory and WINA-210 kale are only available in Whitetail Institute products. Imperial Whitetail Clover: One improvement Vision features is the Whitetail Institute’s latest proprietary clover varieties. These varieties, which are included in Imperial Whitetail Clover, bring the same superior attraction and high protein content to Vision year-round. WINA-100 Perennial Forage Chicory: WINA-100 Chicory, without question one of the most versatile Whitetail Institute perennial forages, is included in Vision for several reasons. The most important is attractiveness to deer, which the addition of WINA-100 chicory provides in two ways. First, WINA-100 chicory is highly attractive to deer. In fact, it has proven vastly more attractive to whitetails than any other chicory the Whitetail Institute has tested. The reason is its sustained palatability. Unlike other chicory varieties, which tend to get waxy and stemmy through time, WINA-100 chicory stays tender and succulent even as it matures. Second, as a component of Vision, WINA-100 chicory also boosts attraction by offering even greater variety in the same food plot. In addition to attractiveness, WINA-100 chicory is extremely high in protein, and its roots can extend several feet deep into the soil — a characteristic that helps make Vision even more drought tolerant. WINA-210 Annual Kale: WINA-210 Kale, another proprietary Whitetail Institute forage component of Vision, is one of the most attractive brassicas the Whitetail Institute has tested. WINA-210 was developed by selecting candidate kale varieties and then repeating cycles of isolating those that best exhibited rapid emergence and attractiveness to deer. At the end of each cycle, only the offspring that best exhibited these traits went on for further testing. The result, WINA210 kale, has proven through Whitetail Institute testing to establish and grow quickly, and provide superior attraction. And like other brassicas, WINA-210 kale gets even sweeter as the first frosts of fall increase their sugar content even further. Vision delivers unsurpassed attraction and abundant nutrition through its precise blend of perennial and annual forages. The Imperial Whitetail Clover and Whitetail Institute chicory components of Vision provide abundant protein year-round for antler growth and overall herd health and can last up to five years from one planting. Whitetail Institute kale increases first-year attraction and tonnage even further and provides essential carbohydrates deer need during fall and winter. Vision is designed for sites with loam, light clay or heavier soil, and that receives at least four hours of filtered or indirect sunlight a day. Avoid areas with soil that holds excessive moisture or drain quickly. Vision should be planted in late summer or fall. See page 39 for your planting dates. For information about Imperial Whitetail Vision, visit whitetailinstitute.com, or call the Whitetail Institute at (800) 688-3030. ^