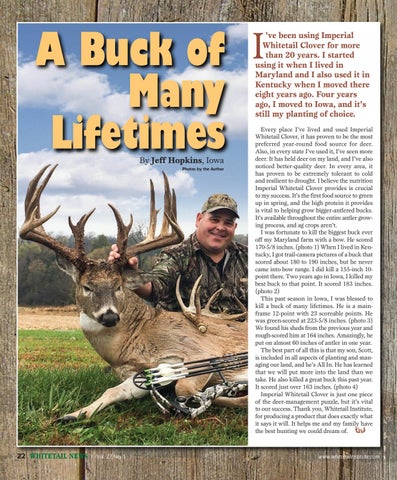 A Buck of Many Lifetimes By Jeff Hopkins, Iowa Photos by the Author

’ve been using Imperial Whitetail Clover for more than 20 years. I started using it when I lived in Maryland and I also used it in Kentucky when I moved there eight years ago. Four years ago, I moved to Iowa, and it’s still my planting of choice. Every place I’ve lived and used Imperial Whitetail Clover, it has proven to be the most preferred year-round food source for deer. Also, in every state I’ve used it, I’ve seen more deer. It has held deer on my land, and I’ve also noticed better-quality deer. In every area, it has proven to be extremely tolerant to cold and resilient to drought. I believe the nutrition Imperial Whitetail Clover provides is crucial to my success. It’s the first food source to green up in spring, and the high protein it provides is vital to helping grow bigger-antlered bucks. It’s available throughout the entire antler growing process, and ag crops aren’t. I was fortunate to kill the biggest buck ever off my Maryland farm with a bow. He scored 170-5/8 inches. (photo 1) When I lived in Kentucky, I got trail-camera pictures of a buck that scored about 180 to 190 inches, but he never came into bow range. I did kill a 155-inch 10point there. Two years ago in Iowa, I killed my best buck to that point. It scored 183 inches. (photo 2) This past season in Iowa, I was blessed to kill a buck of many lifetimes. He is a mainframe 12-point with 23 scoreable points. He was green-scored at 223-5/8 inches. (photo 3) We found his sheds from the previous year and rough-scored him at 164 inches. Amazingly, he put on almost 60 inches of antler in one year. The best part of all this is that my son, Scott, is included in all aspects of planting and managing our land, and he’s All In. He has learned that we will put more into the land than we take. He also killed a great buck this past year. It scored just over 163 inches. (photo 4) Imperial Whitetail Clover is just one piece of the deer-management puzzle, but it’s vital to our success. Thank you, Whitetail Institute, for producing a product that does exactly what it says it will. It helps me and my family have the best hunting we could dream of. ^