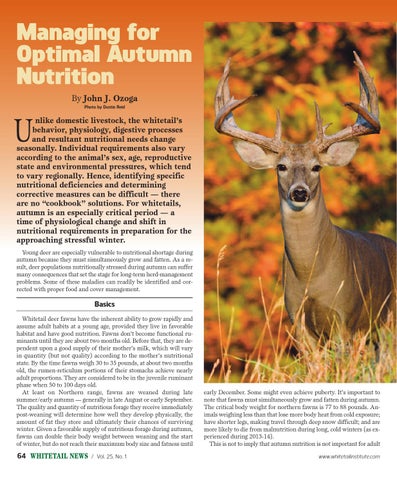 nlike domestic livestock, the whitetail’s behavior, physiology, digestive processes and resultant nutritional needs change seasonally. Individual requirements also vary according to the animal’s sex, age, reproductive state and environmental pressures, which tend to vary regionally. Hence, identifying specific nutritional deficiencies and determining corrective measures can be difficult — there are no “cookbook” solutions. For whitetails, autumn is an especially critical period — a time of physiological change and shift in nutritional requirements in preparation for the approaching stressful winter. Young deer are especially vulnerable to nutritional shortage during autumn because they must simultaneously grow and fatten. As a result, deer populations nutritionally stressed during autumn can suffer many consequences that set the stage for long-term herd-management problems. Some of these maladies can readily be identified and corrected with proper food and cover management.

Basics Whitetail deer fawns have the inherent ability to grow rapidly and assume adult habits at a young age, provided they live in favorable habitat and have good nutrition. Fawns don’t become functional ruminants until they are about two months old. Before that, they are dependent upon a good supply of their mother’s milk, which will vary in quantity (but not quality) according to the mother’s nutritional state. By the time fawns weigh 30 to 35 pounds, at about two months old, the rumen-reticulum portions of their stomachs achieve nearly adult proportions. They are considered to be in the juvenile ruminant phase when 50 to 100 days old. At least on Northern range, fawns are weaned during late summer/early autumn — generally in late August or early September. The quality and quantity of nutritious forage they receive immediately post-weaning will determine how well they develop physically, the amount of fat they store and ultimately their chances of surviving winter. Given a favorable supply of nutritious forage during autumn, fawns can double their body weight between weaning and the start of winter, but do not reach their maximum body size and fatness until

early December. Some might even achieve puberty. It’s important to note that fawns must simultaneously grow and fatten during autumn. The critical body weight for northern fawns is 77 to 88 pounds. Animals weighing less than that lose more body heat from cold exposure; have shorter legs, making travel through deep snow difficult; and are more likely to die from malnutrition during long, cold winters (as experienced during 2013-14). This is not to imply that autumn nutrition is not important for adult www.whitetailinstitute.com