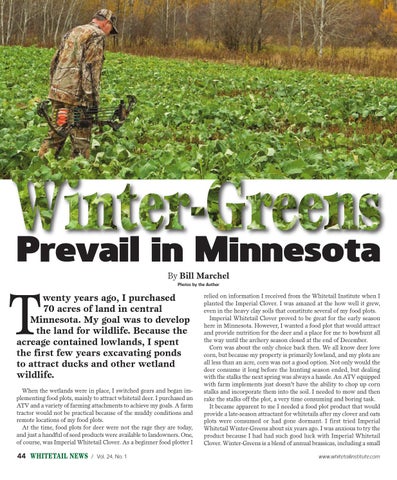 Prevail in Minnesota By Bill Marchel Photos by the Author

wenty years ago, I purchased 70 acres of land in central Minnesota. My goal was to develop the land for wildlife. Because the acreage contained lowlands, I spent the first few years excavating ponds to attract ducks and other wetland wildlife. When the wetlands were in place, I switched gears and began implementing food plots, mainly to attract whitetail deer. I purchased an ATV and a variety of farming attachments to achieve my goals. A farm tractor would not be practical because of the muddy conditions and remote locations of my food plots. At the time, food plots for deer were not the rage they are today, and just a handful of seed products were available to landowners. One, of course, was Imperial Whitetail Clover. As a beginner food plotter I

relied on information I received from the Whitetail Institute when I planted the Imperial Clover. I was amazed at the how well it grew, even in the heavy clay soils that constitute several of my food plots. Imperial Whitetail Clover proved to be great for the early season here in Minnesota. However, I wanted a food plot that would attract and provide nutrition for the deer and a place for me to bowhunt all the way until the archery season closed at the end of December. Corn was about the only choice back then. We all know deer love corn, but because my property is primarily lowland, and my plots are all less than an acre, corn was not a good option. Not only would the deer consume it long before the hunting season ended, but dealing with the stalks the next spring was always a hassle. An ATV equipped with farm implements just doesn't have the ability to chop up corn stalks and incorporate them into the soil. I needed to mow and then rake the stalks off the plot, a very time consuming and boring task. It became apparent to me I needed a food plot product that would provide a late-season attractant for whitetails after my clover and oats plots were consumed or had gone dormant. I first tried Imperial Whitetail Winter-Greens about six years ago. I was anxious to try the product because I had had such good luck with Imperial Whitetail Clover. Winter-Greens is a blend of annual brassicas, including a small www.whitetailinstitute.com