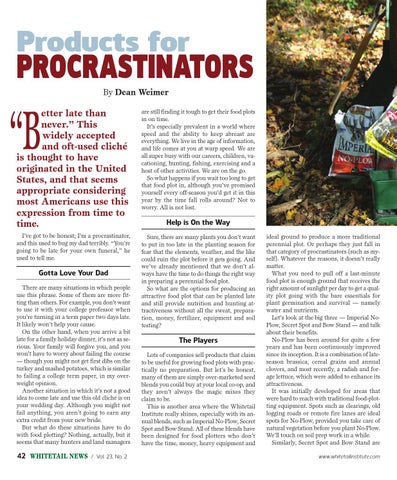 etter late than never.” This widely accepted and oft-used cliché is thought to have originated in the United States, and that seems appropriate considering most Americans use this expression from time to time.

are still finding it tough to get their food plots in on time. It’s especially prevalent in a world where speed and the ability to keep abreast are everything. We live in the age of information, and life comes at you at warp speed. We are all super busy with our careers, children, vacationing, hunting, fishing, exercising and a host of other activities. We are on the go. So what happens if you wait too long to get that food plot in, although you’ve promised yourself every off-season you’d get it in this year by the time fall rolls around? Not to worry. All is not lost.

I’ve got to be honest; I’m a procrastinator, and this used to bug my dad terribly. “You’re going to be late for your own funeral,” he used to tell me.

Sure, there are many plants you don’t want to put in too late in the planting season for fear that the elements, weather, and the like could ruin the plot before it gets going. And we’ve already mentioned that we don’t always have the time to do things the right way in preparing a perennial food plot. So what are the options for producing an attractive food plot that can be planted late and still provide nutrition and hunting attractiveness without all the sweat, preparation, money, fertilizer, equipment and soil testing?

Gotta Love Your Dad There are many situations in which people use this phrase. Some of them are more fitting than others. For example, you don’t want to use it with your college professor when you’re turning in a term paper two days late. It likely won’t help your cause. On the other hand, when you arrive a bit late for a family holiday dinner, it’s not as serious. Your family will forgive you, and you won’t have to worry about failing the course — though you might not get first dibs on the turkey and mashed potatoes, which is similar to failing a college term paper, in my overweight opinion. Another situation in which it’s not a good idea to come late and use this old cliché is on your wedding day. Although you might not fail anything, you aren’t going to earn any extra credit from your new bride. But what do these situations have to do with food plotting? Nothing, actually, but it seems that many hunters and land managers

Help is On the Way

The Players Lots of companies sell products that claim to be useful for growing food plots with practically no preparation. But let’s be honest, many of them are simply over-marketed seed blends you could buy at your local co-op, and they aren’t always the magic mixes they claim to be. This is another area where the Whitetail Institute really shines, especially with its annual blends, such as Imperial No-Plow, Secret Spot and Bow Stand. All of these blends have been designed for food plotters who don’t have the time, money, heavy equipment and

ideal ground to produce a more traditional perennial plot. Or perhaps they just fall in that category of procrastinators (such as myself). Whatever the reasons, it doesn’t really matter. What you need to pull off a last-minute food plot is enough ground that receives the right amount of sunlight per day to get a quality plot going with the bare essentials for plant germination and survival — namely water and nutrients. Let’s look at the big three — Imperial NoPlow, Secret Spot and Bow Stand — and talk about their benefits. No-Plow has been around for quite a few years and has been continuously improved since its inception. It is a combination of lateseason brassica, cereal grains and annual clovers, and most recently, a radish and forage lettuce, which were added to enhance its attractiveness. It was initially developed for areas that were hard to reach with traditional food-plotting equipment. Spots such as clearings, old logging roads or remote fire lanes are ideal spots for No-Plow, provided you take care of natural vegetation before you plant No-Plow. We’ll touch on soil prep work in a while. Similarly, Secret Spot and Bow Stand are www.whitetailinstitute.com