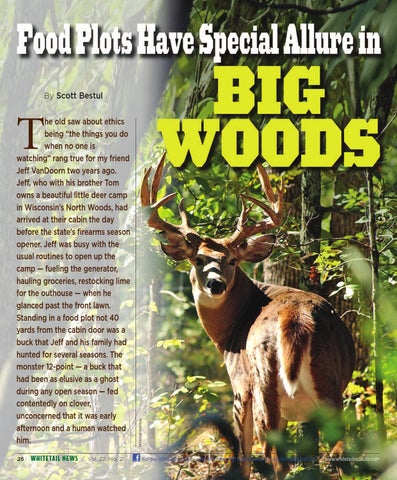 he old saw about ethics being “the things you do when no one is watching” rang true for my friend Jeff VanDoorn two years ago. Jeff, who with his brother Tom owns a beautiful little deer camp in Wisconsin’s North Woods, had arrived at their cabin the day before the state’s firearms season opener. Jeff was busy with the usual routines to open up the camp — fueling the generator, hauling groceries, restocking lime for the outhouse — when he glanced past the front lawn. Standing in a food plot not 40 yards from the cabin door was a buck that Jeff and his family had hunted for several seasons. The monster 12-point — a buck that had been as elusive as a ghost during any open season — fed contentedly on clover, unconcerned that it was early afternoon and a human watched him.