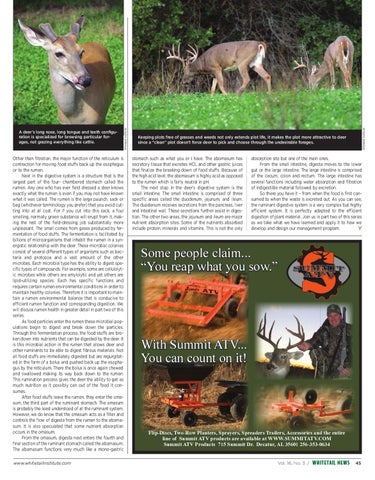 Other than filtration, the major function of the reticulum is contraction for moving food stuffs back up the esophagus or to the rumen. Next in the digestive system is a structure that is the largest part of the four- chambered stomach called the rumen. Any one who has ever field dressed a deer knows exactly what the rumen is even if you may not have known what it was called. The rumen is the large paunch, sack or bag (whichever terminology you prefer) that you avoid cutting into at all cost. For if you cut into this sack, a foul smelling, normally green substance will erupt from it, making the rest of the field-dressing job substantially more unpleasant. The smell comes from gases produced by fermentation of food stuffs. The fermentation is facilitated by billions of microorganisms that inhabit the rumen in a synergistic relationship with the deer. These microbial colonies consist of several different types of organisms such as bacteria and protozoa and a vast amount of the other microbes. Each microbial type has the ability to digest specific types of compounds. For example, some are cellulolytic microbes while others are amylolytic and yet others are lipid-utilizing species. Each has specific functions and requires certain rumen environmental conditions in order to maintain healthy colonies. Therefore it is important to maintain a rumen environmental balance that is conducive to efficient rumen function and corresponding digestion. We will discuss rumen health in greater detail in part two of this series. As food particles enter the rumen these microbial populations begin to digest and break down the particles. Through this fermentation process, the food stuffs are broken down into nutrients that can be digested by the deer. It is this microbial action in the rumen that allows deer and other ruminants to be able to digest fibrous materials. Not all food stuffs are immediately digested but are regurgitated in the form of a bolus and pushed back up the esophagus by the reticulum. There the bolus is once again chewed and swallowed making its way back down to the rumen. This rumination process gives the deer the ability to get as much nutrition as it possibly can out of the food it consumes. After food stuffs leave the rumen, they enter the omasum, the third part of the ruminant stomach. The omasum is probably the least understood of all the ruminant system. However, we do know that the omasum acts as a filter and controls the flow of digesta from the rumen to the abomasum. It is also speculated that some nutrient absorption occurs in the omasum. From the omasum, digesta next enters the fourth and final section of the ruminant stomach called the abomasum. The abomasum functions very much like a mono-gastric www.whitetailinstitute.com

A deer’s long nose, long tongue and teeth configuration is specialized for browsing particular forages, not grazing everything like cattle.

Keeping plots free of grasses and weeds not only extends plot life, it makes the plot more attractive to deer since a “clean” plot doesn’t force deer to pick and choose through the undesirable forages.

stomach such as what you or I have. The abomasum has secretory tissue that excretes HCL and other gastric juices that finalize the breaking down of food stuffs. Because of the high acid level, the abomasum is highly acid as opposed to the rumen which is fairly neutral in pH. The next stop in the deer’s digestive system is the small intestine. The small intestine is comprised of three specific areas called the duodenum, jejunum, and ileum. The duodenum receives excretions from the pancreas, liver and intestinal wall. These secretions further assist in digestion. The other two areas, the jejunum and ileum are major nutrient absorption sites. Some of the nutrients absorbed include protein, minerals and vitamins. This is not the only

absorption site but one of the main ones. From the small intestine, digesta moves to the lower gut or the large intestine. The large intestine is comprised of the cecum, colon and rectum. The large intestine has several functions including water absorption and filtration of indigestible material followed by excretion. So there you have it – from when the food is first consumed to when the waste is excreted out. As you can see, the ruminant digestive system is a very complex but highly efficient system. It is perfectly adapted to the efficient digestion of plant material. Join us in part two of this series as we take what we have learned and apply it to how we develop and design our management program. W

Some people claim... “You reap what you sow.”

With Summit ATV... You can count on it!