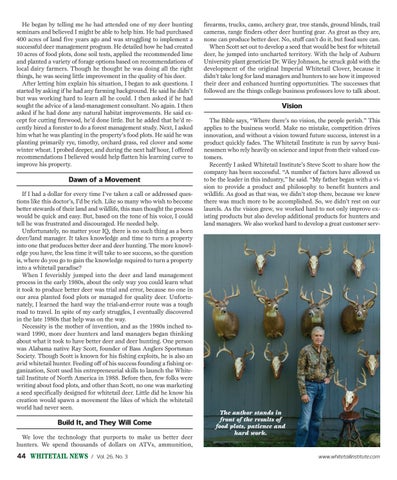 He began by telling me he had attended one of my deer hunting seminars and believed I might be able to help him. He had purchased 400 acres of land five years ago and was struggling to implement a successful deer management program. He detailed how he had created 10 acres of food plots, done soil tests, applied the recommended lime and planted a variety of forage options based on recommendations of local dairy farmers. Though he thought he was doing all the right things, he was seeing little improvement in the quality of his deer. After letting him explain his situation, I began to ask questions. I started by asking if he had any farming background. He said he didn’t but was working hard to learn all he could. I then asked if he had sought the advice of a land-management consultant. No again. I then asked if he had done any natural habitat improvements. He said except for cutting firewood, he’d done little. But he added that he’d recently hired a forester to do a forest management study. Next, I asked him what he was planting in the property’s food plots. He said he was planting primarily rye, timothy, orchard grass, red clover and some winter wheat. I probed deeper, and during the next half hour, I offered recommendations I believed would help flatten his learning curve to improve his property.

Dawn of a Movement If I had a dollar for every time I’ve taken a call or addressed questions like this doctor’s, I’d be rich. Like so many who wish to become better stewards of their land and wildlife, this man thought the process would be quick and easy. But, based on the tone of his voice, I could tell he was frustrated and discouraged. He needed help. Unfortunately, no matter your IQ, there is no such thing as a born deer/land manager. It takes knowledge and time to turn a property into one that produces better deer and deer hunting. The more knowledge you have, the less time it will take to see success, so the question is, where do you go to gain the knowledge required to turn a property into a whitetail paradise? When I feverishly jumped into the deer and land management process in the early 1980s, about the only way you could learn what it took to produce better deer was trial and error, because no one in our area planted food plots or managed for quality deer. Unfortunately, I learned the hard way the trial-and-error route was a tough road to travel. In spite of my early struggles, I eventually discovered in the late 1980s that help was on the way. Necessity is the mother of invention, and as the 1980s inched toward 1990, more deer hunters and land managers began thinking about what it took to have better deer and deer hunting. One person was Alabama native Ray Scott, founder of Bass Anglers Sportsman Society. Though Scott is known for his fishing exploits, he is also an avid whitetail hunter. Feeding off of his success founding a fishing organization, Scott used his entrepreneurial skills to launch the Whitetail Institute of North America in 1988. Before then, few folks were writing about food plots, and other than Scott, no one was marketing a seed specifically designed for whitetail deer. Little did he know his creation would spawn a movement the likes of which the whitetail world had never seen.

Build It, and They Will Come We love the technology that purports to make us better deer hunters. We spend thousands of dollars on ATVs, ammunition,

firearms, trucks, camo, archery gear, tree stands, ground blinds, trail cameras, range finders other deer hunting gear. As great as they are, none can produce better deer. No, stuff can’t do it, but food sure can. When Scott set out to develop a seed that would be best for whitetail deer, he jumped into uncharted territory. With the help of Auburn University plant geneticist Dr. Wiley Johnson, he struck gold with the development of the original Imperial Whitetail Clover, because it didn’t take long for land managers and hunters to see how it improved their deer and enhanced hunting opportunities. The successes that followed are the things college business professors love to talk about.

Vision The Bible says, “Where there’s no vision, the people perish.” This applies to the business world. Make no mistake, competition drives innovation, and without a vision toward future success, interest in a product quickly fades. The Whitetail Institute is run by savvy businessmen who rely heavily on science and input from their valued customers. Recently I asked Whitetail Institute’s Steve Scott to share how the company has been successful. “A number of factors have allowed us to be the leader in this industry,” he said. “My father began with a vision to provide a product and philosophy to benefit hunters and wildlife. As good as that was, we didn’t stop there, because we knew there was much more to be accomplished. So, we didn’t rest on our laurels. As the vision grew, we worked hard to not only improve existing products but also develop additional products for hunters and land managers. We also worked hard to develop a great customer serv-

The author stands in front of the results of food plots, patience and hard work.