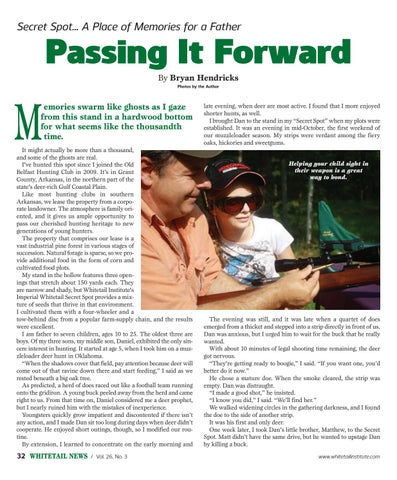 Secret Spot… A Place of Memories for a Father

Passing It Forward By Bryan Hendricks Photos by the Author

emories swarm like ghosts as I gaze from this stand in a hardwood bottom for what seems like the thousandth time. It might actually be more than a thousand, and some of the ghosts are real. I've hunted this spot since I joined the Old Belfast Hunting Club in 2009. It’s in Grant County, Arkansas, in the northern part of the state's deer-rich Gulf Coastal Plain. Like most hunting clubs in southern Arkansas, we lease the property from a corporate landowner. The atmosphere is family oriented, and it gives us ample opportunity to pass our cherished hunting heritage to new generations of young hunters. The property that comprises our lease is a vast industrial pine forest in various stages of succession. Natural forage is sparse, so we provide additional food in the form of corn and cultivated food plots. My stand in the hollow features three openings that stretch about 150 yards each. They are narrow and shady, but Whitetail Institute's Imperial Whitetail Secret Spot provides a mixture of seeds that thrive in that environment. I cultivated them with a four-wheeler and a tow-behind disc from a popular farm-supply chain, and the results were excellent. I am father to seven children, ages 10 to 25. The oldest three are boys. Of my three sons, my middle son, Daniel, exhibited the only sincere interest in hunting. It started at age 5, when I took him on a muzzleloader deer hunt in Oklahoma. “When the shadows cover that field, pay attention because deer will come out of that ravine down there and start feeding,” I said as we rested beneath a big oak tree. As predicted, a herd of does raced out like a football team running onto the gridiron. A young buck peeled away from the herd and came right to us. From that time on, Daniel considered me a deer prophet, but I nearly ruined him with the mistakes of inexperience. Youngsters quickly grow impatient and discontented if there isn’t any action, and I made Dan sit too long during days when deer didn’t cooperate. He enjoyed short outings, though, so I modified our routine. By extension, I learned to concentrate on the early morning and

late evening, when deer are most active. I found that I more enjoyed shorter hunts, as well. I brought Dan to the stand in my “Secret Spot” when my plots were established. It was an evening in mid-October, the first weekend of our muzzleloader season. My strips were verdant among the fiery oaks, hickories and sweetgums. Helping your child sight in their weapon is a great way to bond.

The evening was still, and it was late when a quartet of does emerged from a thicket and stepped into a strip directly in front of us. Dan was anxious, but I urged him to wait for the buck that he really wanted. With about 10 minutes of legal shooting time remaining, the deer got nervous. “They're getting ready to boogie,” I said. “If you want one, you’d better do it now.” He chose a mature doe. When the smoke cleared, the strip was empty. Dan was distraught. “I made a good shot,” he insisted. “I know you did,” I said. “We’ll find her.” We walked widening circles in the gathering darkness, and I found the doe to the side of another strip. It was his first and only deer. One week later, I took Dan's little brother, Matthew, to the Secret Spot. Matt didn’t have the same drive, but he wanted to upstage Dan by killing a buck. www.whitetailinstitute.com