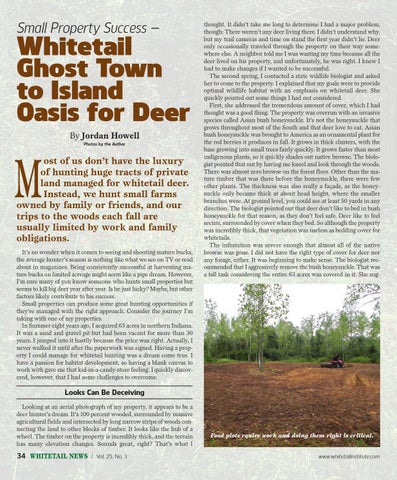 ost of us don’t have the luxury of hunting huge tracts of private land managed for whitetail deer. Instead, we hunt small farms owned by family or friends, and our trips to the woods each fall are usually limited by work and family obligations. It’s no wonder when it comes to seeing and shooting mature bucks, the average hunter’s season is nothing like what we see on TV or read about in magazines. Being consistently successful at harvesting mature bucks on limited acreage might seem like a pipe dream. However, I’m sure many of you know someone who hunts small properties but seems to kill big deer year after year. Is he just lucky? Maybe, but other factors likely contribute to his success. Small properties can produce some great hunting opportunities if they’re managed with the right approach. Consider the journey I’m taking with one of my properties. In Summer eight years ago, I acquired 63 acres in northern Indiana. It was a sand and gravel pit but had been vacant for more than 30 years. I jumped into it hastily because the price was right. Actually, I never walked it until after the paperwork was signed. Having a property I could manage for whitetail hunting was a dream come true. I have a passion for habitat development, so having a blank canvas to work with gave me that kid-in-a-candy-store feeling. I quickly discovered, however, that I had some challenges to overcome.

thought. It didn’t take me long to determine I had a major problem, though: There weren’t any deer living there. I didn’t understand why, but my trail cameras and time on stand the first year didn’t lie. Deer only occasionally traveled through the property on their way somewhere else. A neighbor told me I was wasting my time because all the deer lived on his property, and unfortunately, he was right. I knew I had to make changes if I wanted to be successful. The second spring, I contacted a state wildlife biologist and asked her to come to the property. I explained that my goals were to provide optimal wildlife habitat with an emphasis on whitetail deer. She quickly pointed out some things I had not considered. First, she addressed the tremendous amount of cover, which I had thought was a good thing. The property was overrun with an invasive species called Asian bush honeysuckle. It’s not the honeysuckle that grows throughout most of the South and that deer love to eat. Asian bush honeysuckle was brought to America as an ornamental plant for the red berries it produces in fall. It grows in thick clusters, with the base growing into small trees fairly quickly. It grows faster than most indigenous plants, so it quickly shades out native browse. The biologist pointed that out by having me kneel and look through the woods. There was almost zero browse on the forest floor. Other than the mature timber that was there before the honeysuckle, there were few other plants. The thickness was also really a façade, as the honeysuckle only became thick at about head height, where the smaller branches were. At ground level, you could see at least 50 yards in any direction. The biologist pointed out that deer don’t like to bed in bush honeysuckle for that reason, as they don’t feel safe. Deer like to feel secure, surrounded by cover when they bed. So although the property was incredibly thick, that vegetation was useless as bedding cover for whitetails. The infestation was severe enough that almost all of the native browse was gone. I did not have the right type of cover for deer nor any forage, either. It was beginning to make sense. The biologist recommended that I aggressively remove the bush honeysuckle. That was a tall task considering the entire 63 acres was covered in it. She sug-

Looks Can Be Deceiving Looking at an aerial photograph of my property, it appears to be a deer hunter’s dream. It’s 100 percent wooded, surrounded by massive agricultural fields and intersected by long narrow strips of woods connecting the land to other blocks of timber. It looks like the hub of a wheel. The timber on the property is incredibly thick, and the terrain has many elevation changes. Sounds great, right? That’s what I

Food plots rquire work and doing them right is critical.