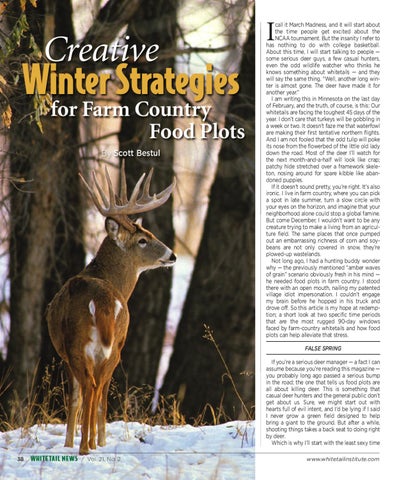 call it March Madness, and it will start about the time people get excited about the NCAA tournament. But the insanity I refer to has nothing to do with college basketball. About this time, I will start talking to people — some serious deer guys, a few casual hunters, even the odd wildlife watcher who thinks he knows something about whitetails — and they will say the same thing. “Well, another long winter is almost gone. The deer have made it for another year.” I am writing this in Minnesota on the last day of February, and the truth, of course, is this: Our whitetails are facing the toughest 45 days of the year. I don’t care that turkeys will be gobbling in a week or two. It doesn’t faze me that waterfowl are making their first tentative northern flights. And I am not fooled that the odd tulip will poke its nose from the flowerbed of the little old lady down the road. Most of the deer I’ll watch for the next month-and-a-half will look like crap; patchy hide stretched over a framework skeleton, nosing around for spare kibble like abandoned puppies. If it doesn’t sound pretty, you’re right. It’s also ironic. I live in farm country, where you can pick a spot in late summer, turn a slow circle with your eyes on the horizon, and imagine that your neighborhood alone could stop a global famine. But come December, I wouldn’t want to be any creature trying to make a living from an agriculture field. The same places that once pumped out an embarrassing richness of corn and soybeans are not only covered in snow, they’re plowed-up wastelands. Not long ago, I had a hunting buddy wonder why — the previously mentioned “amber waves of grain” scenario obviously fresh in his mind — he needed food plots in farm country. I stood there with an open mouth, nailing my patented village idiot impersonation. I couldn’t engage my brain before he hopped in his truck and drove off. So this article is my hope at redemption; a short look at two specific time periods that are the most rugged 90-day windows faced by farm-country whitetails and how food plots can help alleviate that stress. FALSE SPRING If you’re a serious deer manager — a fact I can assume because you’re reading this magazine — you probably long ago passed a serious bump in the road; the one that tells us food plots are all about killing deer. This is something that casual deer hunters and the general public don’t get about us. Sure, we might start out with hearts full of evil intent, and I’d be lying if I said I never grow a green field designed to help bring a giant to the ground. But after a while, shooting things takes a back seat to doing right by deer. Which is why I’ll start with the least sexy time