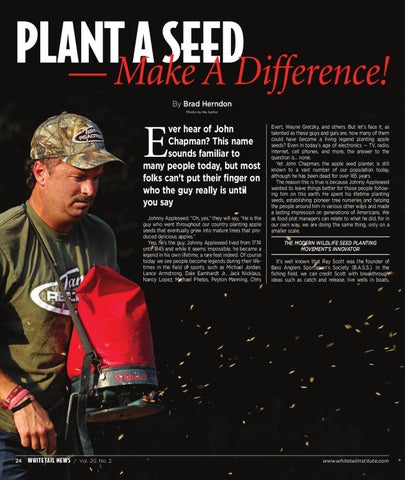 PLANT A SEED — Make A Difference! By Brad Herndon Photos by the Author

ver hear of John Chapman? This name sounds familiar to many people today, but most folks can’t put their finger on who the guy really is until you say Johnny Appleseed. “Oh, yes,” they will say, “He is the guy who went throughout our country planting apple seeds that eventually grew into mature trees that produced delicious apples.” Yep, he’s the guy. Johnny Appleseed lived from 1774 until 1845 and while it seems impossible, he became a legend in his own lifetime, a rare feat indeed. Of course today we see people become legends during their lifetimes in the field of sports, such as Michael Jordan, Lance Armstrong, Dale Earnhardt Jr., Jack Nicklaus, Nancy Lopez, Michael Phelps, Peyton Manning, Chris

Evert, Wayne Gretzky, and others. But let’s face it, as talented as these guys and gals are, how many of them could have become a living legend planting apple seeds? Even in today’s age of electronics — TV, radio, Internet, cell phones, and more, the answer to the question is… none. Yet John Chapman, the apple seed planter, is still known to a vast number of our population today, although he has been dead for over 165 years. The reason this is true is because Johnny Appleseed wanted to leave things better for those people following him on this earth. He spent his lifetime planting seeds, establishing pioneer tree nurseries and helping the people around him in various other ways and made a lasting impression on generations of Americans. We as food plot managers can relate to what he did, for in our own way, we are doing the same thing, only on a smaller scale. THE MODERN WILDLIFE SEED PLANTING MOVEMENT’S INNOVATOR It’s well known that Ray Scott was the founder of Bass Anglers Sportsman’s Society (B.A.S.S.). In the fishing field, we can credit Scott with breakthrough ideas such as catch and release, live wells in boats,