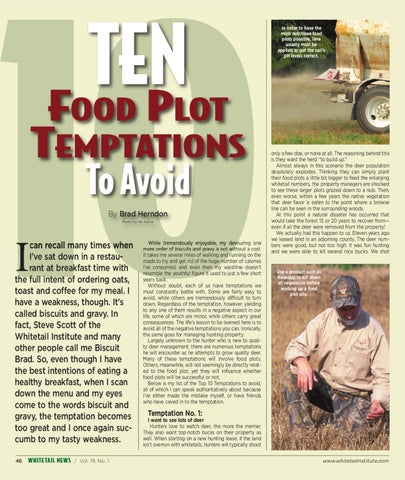 To Avoid By Brad Herndon Photos by the Author

can recall many times when I’ve sat down in a restaurant at breakfast time with the full intent of ordering oats, toast and coffee for my meal. I have a weakness, though. It’s called biscuits and gravy. In fact, Steve Scott of the Whitetail Institute and many other people call me Biscuit Brad. So, even though I have the best intentions of eating a healthy breakfast, when I scan down the menu and my eyes come to the words biscuit and gravy, the temptation becomes too great and I once again succumb to my tasty weakness. 46

While tremendously enjoyable, my devouring one more order of biscuits and gravy is not without a cost. It takes me several miles of walking and running on the roads to try and get rid of the huge number of calories I’ve consumed, and even then my waistline doesn’t resemble the youthful figure it used to just a few short years back. Without doubt, each of us have temptations we must constantly battle with. Some are fairly easy to avoid, while others are tremendously difficult to turn down. Regardless of the temptation, however, yielding to any one of them results in a negative aspect in our life, some of which are minor, while others carry great consequences. The life’s lesson to be learned here is to avoid all of the negative temptations you can. Ironically, the same goes for managing hunting property. Largely unknown to the hunter who is new to quality deer management, there are numerous temptations he will encounter as he attempts to grow quality deer. Many of these temptations will involve food plots. Others, meanwhile, will not seemingly be directly related to the food plot, yet they will influence whether food plots will be successful or not. Below is my list of the Top 10 Temptations to avoid, all of which I can speak authoritatively about because I’ve either made the mistake myself, or have friends who have caved in to the temptation.

In order to have the most nutritious food plots possible, lime usually must be applied to get the soil’s pH levels correct.

only a few doe, or none at all. The reasoning behind this is they want the herd “to build up.” Almost always in this scenario the deer population absolutely explodes. Thinking they can simply plant their food plots a little bit bigger to feed the enlarging whitetail numbers, the property managers are shocked to see these larger plots grazed down to a nub. Then, even worse, within a few years the native vegetation that deer favor is eaten to the point where a browse line can be seen in the surrounding woods. At this point a natural disaster has occurred that would take the forest 15 or 20 years to recover from— even if all the deer were removed from the property! We actually had this happen to us. Eleven years ago we leased land in an adjoining county. The deer numbers were good, but not too high. It was fun hunting and we were able to kill several nice bucks. We shot

Use a product such as Roundup to kill down all vegetation before working up a food plot site.

Temptation No. 1: I want to see lots of deer Hunters love to watch deer, the more the merrier. They also want top-notch bucks on their property as well. When starting on a new hunting lease, if the land isn’t overrun with whitetails, hunters will typically shoot www.whitetailinstitute.com